Therapy From the Podcast Studio 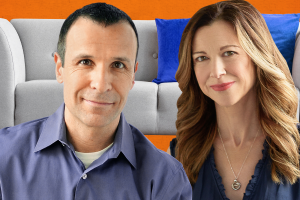 Two therapists in a room with an individual or a couple, trying to provide unified counsel without stepping on each other’s toes? Some therapists still make use of this strategy in their practice, but for many, it was a helpful training tool in their graduate program that they never revisited due to cost or other logistics.

Now, imagine providing conjoint therapy with a client for only a single session.

This is the setup for the “Dear Therapists Podcast,” featuring experienced therapists and advice columnists Lori Gottlieb and Guy Winch. Gottlieb, author of the bestselling Maybe You Should Talk to Someone, pens the popular “Dear Therapist” column for The Atlantic, and Winch is the author of Emotional First Aid and the voice behind “Dear Guy,” the TED advice column.

They teamed up to produce a podcast that addresses a listener’s problem, provides specific advice, and then checks in to see whether or not it helped—all the while trying to work together as a team and provide a unified response.

Only a handful of episodes in, the “Dear Therapists Podcast” is making a big splash in the podcast world. I spoke to Gottlieb and Winch about their process and goals.

Ryan Howes: How did you two meet?

Lori Gottlieb: We were on a panel together about emotional health, and knowing Guy is the TED talker extraordinaire, I asked if he would take a look at a TED talk I was working on. We became friends from there. So when Katie Couric asked me to do this podcast, I thought, wouldn't it be interesting to have a co-therapist on there to get another perspective? The first person I thought of was Guy. In all of our conversations, I felt like we really viewed the human condition in a similar way, but also had our own points of view and were open to any differences that came up. It's like a shotgun marriage of therapists on a podcast.

Guy Winch: It was a shotgun marriage. We were both advice columnists, and we're both therapists. Lori has a background in the entertainment industry. My undergraduate degree was in film and television. When we started talking, there were so many touch points that it seemed like, "Oh wow, we have a lot in common."

RH: Do you come from different theoretical backgrounds, or do you feel like you're aligned when you work on the podcast?

Winch: Because this is therapy on steroids and it's all in an hour, we have to do a lot of work in a very little amount of time—and then give actionable advice. I don't think much in terms of schools of thought when we're doing the podcast. But Lori and I can tell where the other is going, and that’s very useful.

Gottlieb: One of the things that we both have in common in terms of approach is that we really tag-team well together. We’re also unafraid to be upfront with people. Sometimes as therapists, there's this sense that you have to sit back and let clients arrive at something. Given the construct of the podcast, though, we aren't afraid of calling people out. We aren't afraid of saying, "I want you to see your role in this," or "You need to take responsibility for this and we're going to help you do that."

Winch: Unlike a regular advice column or advice podcast, we give people advice that they have to implement within a week, and then we want to hear from them how it went. To do that, we have to come up with very specific, actionable advice. It really does force a certain intensity. We both tend to be direct in our individual work, but even more so in this kind of situation.

Gottlieb: The kinds of advice that we give address problems that you see in therapy all the time. We had a couple come on who'd already been to two couple’s therapists and they’d made no progress with their issue. We had to say, "Okay, what are we going to do that they can try in a week that will get them somewhat unstuck from a place that they've been in for years?" We had an episode with a father who’s estranged from his adult daughter and we had his wife on, because she's the one who wrote to us and estrangement is a very complicated issue. We had to say, "Okay, what can we have you do in the next week that will move this to a different place?"

Then we hear how that happened. Sometimes, as happens in therapy, people don't follow our advice exactly as we've given it to them, but rather take it to a new, even better place. We love to see that.

RH: You mentioned Katie Couric. What was the inspiration for the podcast in the first place?

Gottlieb: Katie was a big fan of my book and my advice column in The Atlantic. What I'm really trying to do with both is democratize therapy. I want to make it accessible. I want to demystify it. I want to give people an opportunity to hear what happens when you start talking about the things that people think they maybe shouldn't be talking about, and how that can really lead to growth and change and transformation.

Katie said, "You should really do this in podcast form. A podcast will let people hear it in the moment." We're not doing therapy on the podcast, but we're giving people a sense of what it might be like. Podcasting is another format where you can reach all kinds of people and expose them to something that will help them to see themselves.

Every time we pick a guest, it's not just because we think it will help that one person, it’s because they’re coming to us with an issue that we see all the time in the therapy room. We think having this person will help other people: especially those who maybe haven't gone to therapy yet and can use the podcast to learn something about themselves.

Winch: Here's an example: I got feedback from a 25-year-old about an episode we did with a stepparent to a six-year-old. You’d think this 25-year-old wouldn’t relate to the problems our guest was having. But she identified those problems with her childhood and to some of her relationships. It's one of those things that, because of the way we do it, there are a lot of takeaways and insights for people. And the minute people start to get curious about themselves, that's what makes them better candidates for therapy.

RH: You’re both advice columnists. How does that work for you when it comes to this podcast?

Gottlieb: When you're dealing with an advice column and a podcast, you don't have the luxury of planting the seeds and then saying, “Five sessions from now, we'll get to a place where I want to hopefully guide them." We have to be very strategic. We need to really think about how to get someone to move from a place that they've been stuck in for a long time.

The reason we follow up after a week is because we want to show people that you can make movement. But you have to be ready and you have to be willing to do the work. Every single person who has come on is very clear about that.

Winch: I remember when I trained with Sal Minuchin in family therapy: that was my first exposure to the consultation model, where we may only have clients for a single session. Since I started my practice, I’ve had clients in town for one day, or wanting a one-off video session. That really trains your muscles as a therapist to do this accelerated thing. The advantage we have in the podcast is that, when you're hearing the same thing, we tag team well. We refer back to what the other person said.

RH: You’re aiming at the same goal from different routes.

Winch: There's no escape. And to be clear, it’s very uncomfortable for people at times, because we're taking them to a place that they've resisted going to emotionally. But they go because they want something to happen, and we’re trying to make that happen.

RH: I know, Lori, you've done consultation groups for a long time, but the idea of conjoint therapy is something that a lot of people visit in graduate school and then never again. The fact that you two are doing conjoint therapy with one person, for one session, is a really interesting take. Has it helped you grow or learn about your own therapeutic style?

Gottlieb: You don't often get to hear other therapists do their work. Sometimes I’ll be trying to make a point with somebody, and Guy, it's like he reads my mind or he sees where I'm going and says what I'm trying to say so eloquently, but in a totally different way. It's like he came in a different door and they were able to hear it that way. As therapists, sometimes we're alone in the room, and we don't know if we're doing a good job because we're not getting that feedback from another therapist. You can tell from how your client feels, but you don't get another therapist's perspective on your work.

I’ve learned so much from doing this podcast with Guy. And it's really enhanced my work as a therapist outside of that.

RH: What are your hopes and dreams for this?

Winch: We really hope that it normalizes and gives people an idea of what you can get from therapy. Not just that, but how therapy should work, or at least give people a sense of what can happen.

People just don't have any clue on what the therapy process is. Here they get a very accelerated version of it, and it gives them an idea of what can be achieved and attained. If it makes therapy less mysterious and more appealing to people, and if they can apply aspects from the podcast in their lives, even without therapy, that will be a job well done, I think.

Gottlieb: One of the things the podcast has done, in terms of the feedback we've gotten, is that it's really helping people to see themselves more clearly. A lot of people think that when you go to therapy, you talk about your childhood, and you never leave. We're saying, "Wait a minute, no.” Therapy is like getting a really good second opinion on your life. We're holding up a mirror to you and helping you to see something that you haven't been able to see yourself.