The Key to Safety and Trauma-sensitive Care 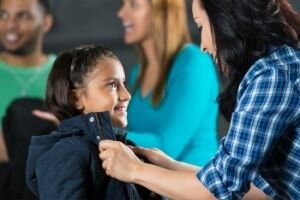 Shayla walks into my office once again. She’s in the first grade, a beautiful, bright child. She’s small for her age, with slightly uneven front teeth. Over the past year, she’s been absent 62 times—more than one-quarter of the academic year—but it’s not her fault. She has chronic asthma. On the days she arrives late, she often walks through the door wheezing. When she goes to the school nurse, her mother, Diana, picks her up and takes her to the emergency room. Diana’s had to be on call for Shayla so often that she can’t hold down a job. Their predicament keeps them “in the system,” as we school social workers say, trapped in a cycle that makes it nearly impossible for them to move forward academically and financially.

I work at a school for elementary- and middle-school kids in the Elmhurst section of Queens, one of New York City’s five boroughs. Shayla is just one of many students in temporary housing (STH), who live at a shelter about half a mile from the school.

Counseling children and families afflicted by homelessness is a rapidly expanding segment of my work. The number of families affected in New York City is alarming, to say the least. Despite New York having the largest school system in the world, with 1.1 million students, 1,695 of the city’s approximately 1,700 schools have students experiencing homelessness. Last year, over 114,000 New York City children lived in temporary housing. Many of them have had to share living space with relatives or other families. Over 34,000 are in shelters. Data shows that the number of homeless students has increased by 70 percent over the last decade.

Not only are attendance rates lower for these students, but they’re almost twice as likely to drop out compared to their permanently housed peers. They also have much higher chronic absence rates—nearly 64 percent compared to 27 percent—and a dropout rate of 62 percent after four years of chronic absenteeism.

When I first met Shayla, I suspected asthma wasn’t her only problem. After all, many students in temporary housing suffer from depression, anxiety, fear, and hypervigilance as a result of their circumstances. Many are also prone to aggressive behavior in their desire to self-protect. They often struggle with schoolwork, have trouble expressing empathy, and, along with their parents, are skeptical of those who want to help. What do these symptoms have in common? They’re all manifestations of trauma, particularly developmental trauma disorder.

Fortunately, the problem is treatable, and providing trauma-sensitive care for these families has become a cornerstone of my work. The school staff and I collaborate to create a safe and supportive environment, normalize the fear of new situations for new students, and communicate that we’ll do our best to take care of their needs.

Usually, these families come to us through our contacts at the shelter. Then, we begin a long road to helping them get back on track. When we first meet, I make sure these kids and their parents get to know the school officials they’ll be seeing on a regular basis. Often, we offer visiting families a bite to eat in the cafeteria, and introduce the kids to other happy students. All of this lets them know that they can be happy here too. Many times, I’ll see parents visibly relax when they sense this.

Large-scale changes are happening, too. The New York City Department of Education recently proposed an initiative to ensure that 80 percent of students graduate high school on time. As part of their new Bridging the Gap (BTG) program, families like Shayla’s are connected with friendly case managers who help them understand their rights and point parents toward job training and independent living. Still, when it comes to managing day-to-day challenges at school, social workers like myself are facing an uphill battle.

I met eight-year-old Audra in the dead of winter, referred to us by the shelter. Six months earlier, she and her undocumented single mother, Mariela, immigrated from Guatemala with just the clothes on their backs. Initially, they’d moved in with Mariela’s sister. Mariela found a low-paying but satisfactory job and settled into a routine quickly. But after a heated argument with her sister, Mariela and Audra were put out on the street. Soon after, ICE got word of their undocumented status and fitted Mariela with a tracking bracelet. They expected to be deported within a few months.

This isn’t unusual. The Elmhurst community has a large immigrant population. I’ve learned that these families are particularly susceptible to complex trauma, especially if they’ve come from unsafe neighborhoods or economic or political upheaval, which is often the case. As dangerous as their old homes might’ve been, many parents feel shame at having had to leave. Audra and Mariela missed Guatemala, they told me, and couldn’t wait to return.

My first objective was to provide Audra and Mariela with a sense of safety and security, and then build trust. Digging through our school’s stock of donations, we gave them each a new winter coat and some used clothing. Then, I got in touch with a social worker who said she’d take them shopping. I told Mariela that in the coming days, once their immediate safety needs were met, we’d be assigning Audra to a class, monitoring her progress carefully, and offering support as needed. Hearing this, she smiled. It turned out Audra fit in with her classmates quickly.

I’ve learned to watch for families’ immediate needs. Too many clinicians think that families like Mariela’s will talk to us just because they need help. Not true. First, I start with where they are. I ask myself, What do they need right now? A fresh change of clothes? A bite to eat? Many schools, mine included, collect donated clothes, and the lunchroom always has food available. I provide families with a list of local food kitchens and clothing sources for the future. I give them a list of nearby mental health agencies and hospitals too, just in case. Since parents sometimes need a break, I even give them with contact information for free daytime summer camps.

In my years doing this work, I’ve taken away several important lessons that anyone working with this particular population, or interested in working with it, needs to know. First, try to meet these families where and when it’s convenient for them. Once a week, I meet parents at the shelter to get updates on how things are going. Some of my most important work with them has been done at bus stops, moments after their kids left for school and they pulled me aside to talk about their latest challenge.

Second, it’s crucial that any clinician working with families experiencing homelessness makes themselves a fixture in the community where they practice. Don’t just research the community online.

Get out of your office and walk to the grocery stores, barber shops, and places of worship. Walk into stores, tell them about your work, and ask if they’ll donate toiletries or sell them at a discount. Meet the barbers at the local salon and ask if they’d be willing to come to the shelter once a week and give haircuts for a flat fee. Visit firehouses and police stations to see if staff members are willing to give presentations to parents and kids. A group of firefighters I work with recently sponsored a miniature carnival for our students, complete with a bouncy house. Get creative. Most schools have a little money in their budget to help with events like these.

Third, little changes can go a long way. When I first began this work, I noticed a lot of kids encountered trouble as soon as they got on the bus in the morning. On the five-minute ride from the shelter to school, kids would get into fights, call each other names, and curse. When teachers tried to put a stop to it, the kids only blamed each other, and nothing got solved. In a small attempt to create order, I decided to instruct all the kids to form a straight, orderly line once they got off the bus. Things didn’t improve immediately, but with a little time, things improved!

To be sure, the COVID-19 pandemic makes doing this hard work even more difficult. In April, New York Governor Andrew Cuomo announced that all schools would be closed through September. With space at shelters already in short supply and more out-of-school kids filling them, social distancing has become nearly impossible. While the city Board of Education implemented plans to teach these students online and distributed iPads to nearly 300,000 students shortly after school closures were announced, many of these students—especially those who speak English as a second language—have found it difficult to work with the unfamiliar technology. Plus, many shelters also lack functional wifi.

Ultimately, though, I’ve learned that it doesn’t take fancy interventions to help displaced families feel better. Sometimes, the answer is as simple as giving parents a reassuring smile, some warm food, and a promise that you’ll do everything you can to help them and their children get back on their feet. When it comes to the kids, simply modeling that there are many ways for them to articulate feelings—some better than others—and providing them with a sense of control in what seems like uncontrollable circumstances makes all the difference in making them happy and healthy again.

Howard Honigsfeld, MSW, is a teacher, social worker, and therapist who’s worked in New York schools and abroad. He specializes in working with kids and families.