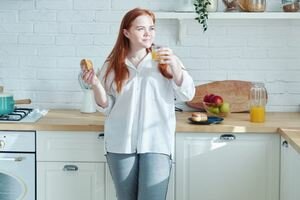 I’m a therapist who specializes in eating issues, and when COVID-19 hit, and many of us began stocking up on food and sheltering in place, I grew deeply concerned for my clients. How were they going to handle the endless hours of isolation, or conversely, the stress of too many people at home at once? What if they or someone they knew got sick or lost their job? And if they felt more anxious or depressed as time wore on, would they find themselves turning more to food, leaving them to feel that somehow they’d failed?

In Lockdown with Food

Gina, a middle school teacher in her 50s who lives alone in a Chicago suburb, reached out to me a couple of months into quarantine. She’d finished a medically supervised weight-loss program just before the pandemic hit, and after decades of dieting and gaining weight back, she thought she’d finally found her answer with a plan she could maintain. But alone in her home, with cabinets full of food, her eating had spiraled out of control again. Gina bemoaned the return of those lost pounds.

Fighting back tears as we talked, she told me, “I know I’m an emotional eater. And now, I’m just so lonely. What am I going to do? Food’s always been my go-to when I’m upset. How am I supposed to lose the weight I’ve put back on when things are this awful?”

I smiled gently and told Gina that above all else, self-compassion was what she needed right now. During times of distress, turning to food to soothe yourself is completely understandable. Emotional eating isn’t a moral issue. It doesn’t make us weak or bad.

To help counter the hopelessness she was feeling, I also emphasized that although the pandemic may have accelerated her weight gain, it was important to remember that regaining weight is the typical outcome for the vast majority of people who diet. She wasn’t an outlier, and I wanted to help her let go of the shame.

Gina was ready to dive in. She was aware that I have a non-diet approach to overeating, and in my workshops, I focus on what’s called attuned, or intuitive, eating. First, we worked to help her identify signals of hunger and fullness.  A gnawing or empty feeling in the stomach is a good indicator of physical hunger. But it turned out that Gina often felt weak or got a headache, both of which are indicators of waiting too long to eat. She wasn’t eating enough during the day, which explained some of her evening bingeing: she was letting herself get too hungry, and then couldn’t stop.

One of the most important steps here is to let go of concepts of “good” and “bad” foods when it comes to figuring out what satisfies us. For example, the idea of feeling fine about eating something sweet after dinner without losing control was both exciting and scary to Gina. So we focused there. She was thrilled to report back, “This is the first time I can remember eating cookies without guilt! Knowing I can have them regularly, made a big difference in being able to stop when I’d had enough.”

Then we got into the nitty gritty of being alone at home and how food serves her emotional needs.

I asked her to brainstorm with me about other possible ways, in addition to food, that she could comfort and even distract herself from the feelings of loneliness she was having during this unprecedented time.

“I like to do jigsaw puzzles and coloring books,” she told me. “They calm me when my thoughts race.”

Good. And what about other people? Connection, I knew, was essential to her mental health.

She agreed to tell some of her family members that she was struggling with the isolation. She would try setting up regular Zoom calls with her brother and a few close friends.

Even as Gina finds herself feeling more in charge of her eating, she continues to fret about the weight she regained. To make matters worse, she spends enough time on social media that she’s privy to the many fat-shaming memes that have popped up as we all quarantine. Certainly, humor helps in times like this. But not only are these kinds of jokes not funny, they perpetuate weight stigma and hurt people who are already struggling with body image and overeating concerns.

Gina is partly on social media these days because of her growing interest in dating now that she’s been divorced for several years. Though she thought her shame around her body size was the reason she was putting off finding a relationship, she’s come to realize that anxiety about how to start over again and build intimacy also plays a major role. So, as we work on her body acceptance and the realities of diet culture, we’re also exploring important issues like this, which can be masked by a focus on weight.

Letting the Shame Go During COVID

In general, my clients find that developing a healthy relationship with food happens at a faster pace than letting go of body shame. I’ve often had clients who are on this path tell me that they can feel comfortable in their own home, but the minute they walk out the door, the negative body thoughts come flooding back.

Perhaps it’s not surprising then that for my client Megan, these months of physical isolation have come with a silver lining. As someone who frequently travels for work and meets up at bars and restaurants with lots of friends, her internal critic often tells her that people are judging the size of her body. But after many months at home, those feelings of judgement and shame are fading.

There’s been a very positive downstream effect of this. Free of others’ eyes on her, she’s no longer berating herself for her weight, but feeling more able to pay attention to her body in attuned ways. She’s noticing when she needs rest, and when she feels strong, such as on a recent bike ride with her partner.

“I’m struck by how much weight stigma there is out in the world, and how it leaves people like me, who don’t conform to cultural beauty standards, full of shame,” Megan told me.  “There’s something about being in public less that’s helped me learn that it’s not a fact that my body is wrong. I feel great at home. Now my issue is being worried about what will happen when I have to go back to the office.”

I was pleasantly surprised to find that for many of my clients who were already well on their way to making peace with food, the increased amount of it in their homes was a nonissue.

Cliff is a single writer in his 30s who’d ended the deprivation caused by dieting when he gave himself permission to eat all types of foods without judgment. He told me that he initially worried about “losing control” when he brought home enough food to last for several weeks. But as the days passed, he found himself still practicing the attuned eating he’d been cultivating over the previous year. He continued to honor his cues for physical hunger and fullness even through the stress and the boredom. Not only was this a source of relief, but it felt like a turning point.

“I feel so calm knowing that when I’m hungry, there’s a good chance I’ll have what I need at home,” he said. “This pandemic has shown me that I’m finally at peace with food.”

While I continue to work with people to heal their relationship with food and their body, I also offer compassion—and support them in developing self-compassion—for what it takes to get through this collective trauma. They aren’t obligated to start a new hobby, develop a new yoga practice or organize their home. They choose what serves them best. But I do encourage them, and all of us, to try one thing, and that is not to worry about our size, but rather feel grateful to our bodies for simply surviving a global pandemic.

Judith Matz, LCSW, is coauthor of The Body Positivity Card Deck, Beyond a Shadow of a Diet and The Diet Survivor's Handbook. She has a private practice in Skokie, IL. Contact: judithmatz.com and on Instagram @judmatz.