Strategies to Cope with Distance Learning

A Systems Approach for Parents and Children 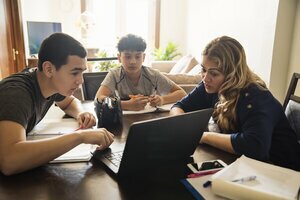 Last month, Tejal, a fellow therapist, sought out supervision after struggling with a client whose anxiety had become especially bad. Sanam, her client, worked full time and was a mother of three grade-school children. She was feeling particularly stressed about her kids’ well-being and education during the coronavirus pandemic.

Sanam lived in Chicago, where the school board had decided that all children would be doing remote learning in the Fall. Adding to complications, her husband, Nader, worked in Arkansas, and while he was trying his best to help parent from a distance, he could only do so much. Both Sanam and Nader had moved to the United States from Pakistan five years earlier, Tejal explained, and didn’t have family nearby who could lend a hand. “I feel like I’m losing control,” Sanam told Tejal in a recent session. The thought of her kids getting a sub-par education kept her up at night, she said, and sent her into panic attacks during the day. Sanam couldn’t believe her bad luck: she and Nader had moved to the U.S. precisely to give their children a better education. She never imagined they’d have to do remote learning.

Reluctantly, she’d decided to seek therapy at Nader’s insistence, choosing to work with Tejal because she, too, came from a South Asian background. But Tejal, too, was at a bit of a loss as how best to guide her through these uncertain times. After all, there weren’t any manuals or established best-practices for working with anxious parents during a global pandemic.

In our consultation with Tejal, we focused on identifying constraints and providing her with practical guidelines to shift the focus from only helping Sanam reduce her immediate anxiety to a more systemically oriented approach. We turned to the Systemic Inclusive Framework (SIF), an approach that takes into account the larger systems in the client’s life. This was especially important given that Sanam’s anxieties were tied to larger systemic issues like immigration, the pandemic, and unique family circumstances. We also encouraged Tejal to reflect on her own intersections with the case, such as past anxieties linked to immigration, her “blind spot” regarding Nader’s disengagement, and her own recent high levels worry related to professional changes and uncertainty following the pandemic. This helped Tejal take a “meta view” of the anxiety and move away from closely focusing on the immediate symptoms of anxiety.

After speaking with us, Tejal encouraged Sanam and Nader in their next teletherapy session to redistribute some responsibilities. Nader agreed to adjust his work schedule so he could monitor the kids’ work from home. Tejal also helped the two structure a successful at-home learning plan with specific strategies. They decided to implement regular family meetings that included the kids. They even decided to share their difficulties with extended family, as well as a trusted neighbor who listened sympathetically and offered advice. Nader’s father also decided to pitch in when he heard the news, offering to read the children bedtime stories through Zoom, all the way from Karachi, Pakistan. All of this helped Sanam and Nader feel more collaborative and more in control. Meanwhile, Tejal normalized their concerns.

According to the principles of SIF, working with both parents as well as the family system is critical. The therapist must also be aware that of larger systems and societal forces. For instance, Tejal realized that Sanam’s worries were in part linked to the gendered assumption that she, the mother, alone was responsible for making sure the children got a good education. By asking Nader to be more engaged in that process, their relationship became more of a partnership. Also adhering to SIF principles, Tejal helped Sanam and Nader tap into their community and extended family networks, where they discovered resources that they were previously unaware of, in part due to cultural conditioning and stigma surrounding mental health.

As therapy continued, Tejal reminded Sanam and Nader that setting kids up for educational success means staying enthusiastically engaged and involved in a child’s life, rejecting the impulse—and sometimes, the child’s insistence—that they go it alone. Rather, parents must be consistent in their involvement, reward effort, and enforce consequences when kids don’t follow through. One way to help kids become more invested in their own success and less nervous or fearful about school is to make tasks fun and developmentally appropriate. Under the Social Emotional Leaning (SEL) framework, this cements children’s long-term learning and relationship skills.

Still, taking a systems approach can be difficult when parents are overwhelmed, kids are stuck inside all day, and stress levels are high. Luckily, there are several strategies that can help therapists guide parents with kids who are learning remotely. One strategy is for parents to create comfortable workstations around the home (with their children’s input) that encourage kids to focus on schoolwork. Nader took part in this process virtually but brought plenty of enthusiasm to the table. With Sanam and the kids, he discussed every little detail in these workstations, including lighting and seating. He and Sanam also encouraged the children to decorate the space, which they did with gusto. By the time they were finished, the kids were so proud that they took photos of the workstations to share with their friends.

Sanam also involved the kids in choosing their daily snacks and lunches, prepping their meals in advance the same way she’d been doing when the kids were going to school in-person. Meanwhile, Nader took on the responsibility of writing up the grocery list. The parents also gave their kids structure by scheduling several short outdoor recess times throughout the day to provide a break from their computer screens. On days when the weather didn’t cooperate, they scheduled time away from the workstation in another part of the home, where the kids could do other activities like drawing, dancing, and exercising.

As the virtual school year approached, Tejal offered specific recommendations for Sanam and Nader to tackle jointly, like connecting with a teacher or teacher’s aide weekly for regular check-ins. When Sanam and Nader realized that the kids’ school didn’t offer a mentor program, they were referred to local high schools and universities where students sometimes offer mentorships for younger kids. There are a number of mentorship programs like these in Chicago already, like ChicagoScholar.org, which finds mentors for ambitious students from under-resourced communities.

Sanam was relieved to find that there were many resources available for her and the children but remained apprehensive about caring for the children from home during the day since she was still working full-time. She needed to keep interruptions to a minimum—nearly impossible with her youngest two, she said. Tejal suggested that Sanam and Nader consider using remote-learning childcare services offered by the local park district. Since the start of the pandemic, some park districts have begun offering supervised childcare where kids can complete their virtual classwork. Upon hearing this, Sanam decided to reach out to see if it might be a good fit for her youngest two.

Another strategy Tejal recommended was that Sanam and Nader try to get in touch with their own energy levels, as well as attune to each other’s, so that they’d know when to offer support. In one session, Tejal guided the two in co-attuning, asking them throughout the session to stop and notice when they got defensive or lectured the other partner. She also helped them learn to ask inquisitive, inviting questions of each other, instead of ones that invited simple, surface-level responses.

As they grew together in therapy, Tejal helped Sanam and Nader develop other parenting strategies, including disciplining the kids when they acted out, and paying attention to patterns when they did. Sanam discovered that the kids often misbehaved when they missed their father and was able to reframe their acting out as sadness. Other sessions focused on teaching Sanam and Nader to reward the children for good behavior rather than focus solely on punishing them for bad behavior, which, thanks to her learning the SIF perspective, Tejal also realized was influenced by their cultural upbringing. Moving forward, this family will be stronger by focusing on the needs of their children, their couple functioning and roles, as well as their experiences as immigrants. Tejal will also be more effective in exploring the needs of her clients vis-à-vis her own identity, in the context of societal and global forces.

With a little coaxing from Tejal, Sanam worked up the courage to tell her employer’s human resources department that she needed to adjust her schedule to make more time for her kids since they’d be home with her all day.

Still, Sanam and Nader made sure to make time for fun in their children’s lives. Although Nader was spending most weeks out of town, they carved out time for the whole family to play games over Zoom. And when Nader was busy but Sanam wasn’t, she added silly games to the children’s routine, sometimes even including virtually the family members back home they’d missed so dearly. Involving these outside systems took a huge load off Sanam’s shoulders. Eventually, once she and the kids fell into a routine, she connected with a local South Asian community that provided a kin network and reduced some of the loneliness she’d felt as an immigrant. Slowly but surely, her anxiety dropped, and the family developed a healthy routine where the kids’ felt intellectually stimulated, happy, and prepared to face the year ahead.

Bahareh Sahebi, LMFT, PsyD, is a core faculty member and clinical supervisor in the Masters in Marriage and Family Therapy Program at Northwestern University. She is a teaching faculty in Northwestern’s School of Education and Social Policy, a practicing LMFT at The Family Institute, and cofounder of ParentLENS.com.

Mudita Rastogi, LMFT, PhD, is the program director for the Master of Science in Marriage and Family Therapy at The Family Institute at Northwestern University, as well as a Clinical Professor. She’s a certified executive coach and career development coach, an AAMFT-approved clinical supervisor, a well-published author, and editor who has developed the Systemic Inclusive Framework (SIF). She is also the cofounder of ParentLENS.com.