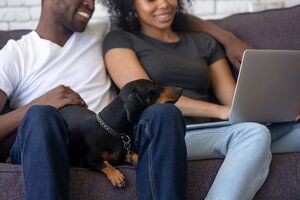 I consider myself lucky. When the lockdown began, I was already transitioning to doing online couples therapy. If, say, one partner was unable to make it to a session, I’d offer them a virtual alternative with the other partner in my office. Another couple I’d been working with moved away but wanted to continue working with me, so online therapy proved convenient. Another couple that had been driving over an hour to come see me finally decided the commute was too much, and decided to switch to online. So, when I stopped being able to go to the office, I knew what to do.

Don’t get me wrong—while I enjoy the flexibility and creativity online couples counseling provides, I’ve had to learn things along the way. I’ve made a few mistakes, too. But over two years of doing online couples work, I’ve come up with a set of guidelines that have served me well.

After taking a six-month break from therapy, Cal and Laura recently decided to resume our work together. They’d left therapy in a fragile state, constantly triggering each other and erupting in angry outbursts that left them feeling depleted and hopeless. Laura said she didn’t feel heard when she complained to Cal, so she tended to raise her voice and “go nuclear,” as she phrased it. Cal, meanwhile, often felt accused and criticized by Laura, feeling “constantly scrutinized” and defensive whenever Laura said how she was feeling. Hitting a wall, they pressed pause on treatment.

I wasn’t surprised when Laura emailed me two weeks after the lockdown began in our state, asking if she and Cal could see me again. Cal had been furloughed from his job, she told me. He’d been drinking more and was often irritable. When I asked Laura if she’d be open to a Zoom session, she obliged. I knew, however, that it would be very different managing their volatility through a screen.

Previously when I’d worked online with volatile couples, I’d found that having a digital equivalent of sending one of them to the waiting room was particularly effective. Zoom allows meeting organizers to mute individual participants (something I’m sure I’ll miss when I resume in-person therapy!). Of course, this only works if partners aren’t using the same device, so, depending on the couple, I might ask one partner to join from another device in a different room. When all else failed, I learned I could ask one partner to take a break in another room while I worked with the other partner, then switch.

In my first few minutes with Cal and Laura, I had to do exactly that. Each of them wanted to tell me their version the story. Since they were talking over each other, I asked Cal to move to a different location in the apartment and join us with his smartphone. “I know you’re both feeling triggered right now,” I told them once Cal had logged back on. “Let’s just take a moment to take a few breaths. I find it also helps people relax if they raise their hands over their heads a few times.”

Cal and Laura both agreed. But when they started raising their hands, both of them broke out laughing, “I look ridiculous right now,” Cal chuckled. Laura nodded. For now, at least, we’d successfully defused the situation.

“Cal, I’m going to mute you for just a minute so I can hear Laura, okay?” I told him. Cal nodded.

“In the meantime,” I continued, “I’d like you to grab a pen and some paper so you can write down your reaction to what Laura’s saying without actually responding. Laura, I’ll do the same with you next, okay?” Both nodded.

I have a myriad of exercises—lists, charts, assessments tools, and true or false statements, that I can now easily show clients on my computer without having to make copies.

I told Cal and Laura to think about their answers before responding, to respond in no more than three sentences, and to take turns answering. “These kinds of questions tend to slow down people’s reactivity,” I told them, “and let them keep in mind both what they want to say and how what they’re saying might affect their partner.”

Afterwards, both Cal and Laura reported that they’d felt heard. I asked Cal to log off and return to his spot next to Laura. “During our last five minutes, I’d like you each to finish the following sentence,” I said. “One thing I appreciated about you during this session is….”

Cal went first: “I appreciated that you listened to me without interrupting when I described how I feel criticized.”

And Laura: “It made me feel good to know how you feel. I appreciated that you listened instead of trying to prove your point.” They shifted a little closer to one another, and smiled. Both agreed to meet at the same time the following week. It was a strong start.

While I’ve always believed in pre-session preparation, it’s even more important with online couples therapy. As I normally would, I send all my new clients a series of questions to assess their motivation, the nature of their issues, and what they’ve done to solve them.  I also want to know if they feel safe bringing up concerns, so I can decide whether to see them jointly or individually.

But I also like for each partner to think about how they’re going to create the best context for success. That needs to come from them, not me. To get each partner brainstorming, I send them a teletherapy informed consent document before the first session, along with several guidelines on how to make the best of an online session.

For example, one sentence from the guidelines reads: “I do my best to provide privacy when we meet in the office. With online therapy, creating the private space is up to you. Please turn off devices, consider getting a white noise generator, and think about what you might say if someone happens to come into your private space unexpectedly during a session.” I also advise clients to consider having a box of tissues nearby.

One thing I notice myself relying on more heavily that complements online therapy well is email. Sometimes, toward the end of a session, I’ll ask partners to each write a two-sentence email to themselves, each other, and me, describing the takeaways from our session. I find this to be a good way for clients to solidify what they’ve learned, plus it communicates to each partner that their significant other is motivated and committed to the work. Since clients will always have their email accounts handy during online sessions, it’s easy for them to retrieve their notes before sessions begin, which I’ve found cuts down significantly on the I-don’t-remember-what-we-discussed-last-time comments I sometimes get during in-person sessions.

Last, I usually ask that clients leave 15 minutes between the end of our session and any planned activities, since the built-in break between leaving my office and the next activity is no longer available. Couples therapy tends to be emotionally draining for partners, and if they need a break from each other, this buffer can provide that.

Such was the case with Rich and Selena, both in their mid-fifties with three children, and married for almost 20 years. I’d been working with them pre-pandemic, and while they’d made progress in many areas, their sexual relationship was still lacking. For months, Selena had been dealing with her aging mother’s worsening Alzheimer’s while simultaneously shouldering the duties of a stay-at-home mom. It was understandable that after a hard day, sex wouldn’t be the first thing on her mind. Rich, on the other hand, was becoming increasingly frustrated. He worked long hours for relatively little pay, and said he felt rejected, lonely and angry. It was a classic dynamic: The more frustrated Rich became, the more Selena retreated. The more Selina retreated, the more frustrated Rich became.

After the lockdown, we started doing online sessions. For a while, the work seemed relatively mundane, with little measurable progress. But during their fourth session, in the middle of a particularly tense moment, Harvey, the family dog, entered the room where Rich and Selena were chatting. I’d never seen him before. Selena introduced me to Harvey, who instantly became playful, jumping onto Selena’s lap and wriggling around in front of the computer affectionately. Selena laughed as Harvey settled down. Gently, she kissed his forehead. I saw an opportunity, and jumped on it.

“Rich, when you see Selina being playful and affectionate with Harvey, how do you feel?”

“And what else?” I pressed. Rich paused for a moment.

“It feels painful. Here I am longing for her, and it reminds me of how much I miss her tenderness, her playfulness with me. It sounds stupid, but I’m jealous. I wish I could reach out and get an affectionate response like that.”

He continued: “She thinks all I want is sex, but that’s not true. The physical affection, the kissing, the cuddling…I really miss that about us.” Selina nodded.

“Selina, what’s it like for you to hear Rich say that?” I asked.

“It would make a world of difference to me if Rich could talk to me like this at home, instead of just being a grouch. I mean, Harvey makes himself loveable—he turns around to show me that he wants affection.”

“I guess I could work on communicating that better,” Rich acquiesced.

“You’re right though,” Selena said, turning to Rich. “You deserve my attention too, I’ve got no excuse.”

The moment marked a turning point in my work with Rich and Selena. Over next few weeks, they not only communicated better, but learned to communicate better between appointments. All thanks to a serendipitous moment that online therapy provided.

Since the pandemic, most of the couples I work with have said they enjoy online therapy. They like the flexibility it provides, plus many of them are used to working online already, so the learning curve is a quick one. I can even see some of them moving to online therapy exclusively when this pandemic is over.

That’s not to say that everyone has made the transition easily. Some couples I worked with have dropped out, needing to devote their time and energy to homeschooling their children. Another couple dropped out of therapy because their small home couldn’t afford them a quiet, private space to chat. But overall, I want therapists who are skeptical about online therapy to know that it is possible to do good work with clients online. We can still connect, show empathy, get creative, and discover breakthrough moments. One couple I work with recently emailed me to say they wouldn’t have been able to survive the quarantine without the skills we learned in our online sessions. It’s music to my ears.

This pandemic has changed the way I work with couples forever. Although I’m not giving up my office any time soon, I don’t think I’ll ever leave online therapy behind.

Sara Schwarzbaum, EdD, LMFT, is the founder of Couples Counseling Associates in Chicago, where she currently practices. She provides online training and supervision for therapists who want to improve their work with couples. She's also Professor Emerita at Northeastern Illinois University's Master's in Counseling Program, where she taught couples and family therapy for 18 years. Contact: sescounseling@gmail.com