A Technophobic Therapist and COVID-19 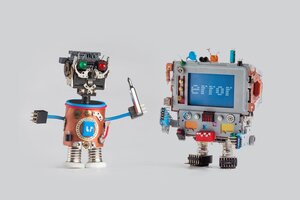 In the last few weeks, as the specter of contagion has rapidly grown more ominous with each news cycle, an unthinkable professional reality has emerged for therapists, one that favors technophiles over technophobes. I’m a technophobe—through and through—and a therapist.

My fear is reality based: My first computer crashed in my early 20s, taking with it a long-labored-over novel, written entirely without proper backup. Then, in my late 20s, I couldn’t get the slides straight at a conference of systems-trained psychotherapists, one of whom publicly interpreted my incompetence as an act of passive-aggression. In my early 30s, I hit the wrong button and mistakenly invited everyone in my email list to take a survey of their favorite sexual positions, including my exes, relatives, and bosses. This aversion—a phobia of all technology, even watches, cameras, and espresso machines—has waxed and waned throughout my life, but lately, it’s taken on a life of its own. Like an evil genie released from a bottle, I’ve watched it balloon out over the uncertain horizon of my professional future.

My first coronavirus-mandated video session took place two weeks ago. I was dressed in a formal top and ripped jeans: professional from the waist up. The “join a meeting” box assured me I was “connecting” while its shaded sundial spun around and around. A minute passed. Two. Five. “Are you there?” one member of the couple I was seeing texted me.

“Trying to get on,” I replied, moving my cursor around my Zoom account and clicking on random areas in an attempt to will myself on screen. I tried joining through my “upcoming meetings” page, but that didn’t make a difference, either. Finally, I called the client directly. “Zoom isn’t working,” I said in my best semi-neutral voice, though I was panicking.

“No worries,” my client assured me. “Let’s try Google Hangouts. I’ll send you an email. Click on the link when you get it.” A couples therapy session on Google Hangouts would’ve turned my stomach, a month ago—even without taking HIPPA compliance issues into account—but at this moment, with the shaded Zoom sundial spinning itself into oblivion, it seemed like a tip-top option.

All things considered, our session went well. I survived the shock of seeing my hair jutting out in every direction on the screen, and the mortification of pings and chimes interrupting quiet pauses, and the tightening in my stomach that may have been envy as I glimpsed my clients’ floor-to-ceiling windows in a spacious, elegant home. We explored how they were coping with teleworking, and what they each wanted to experience with one another to feel loved and supported in the midst of a pandemic. One of them needed more space; the other more connection. They volunteered silver linings: they’d been eating better at home and forgoing stressful commutes to the city. There would be time to rest, to read, to take stock.

Other sessions I’ve had with clients willing to meet online have also gone fairly well, but I’m still scared and mad about the whole thing. It feels a bit to me like going from lagoon-swimming to immersing a pinky in a thimbleful of water—like shifting mid-symphony from Dolby Surround to a single mic speaker. Can you still hear the music? Yes. Feel the water? Sure. But it’s different. I never quite know if the link one of us clicks on will work, or if we’ll all appear on screen together, or if someone will move their mouth without a voice, or if a voice will be audible without a face, or if we’ll end up having to do therapy in Google Hangouts, or if we’ll just give up and reschedule.

To me, therapy has meant in-person connection, nervous system to nervous system, aura to aura, all of it taking place three dimensionally in a curated, protected, womb-like space. It’s meant being curious about the subtle cues of a client’s shifting facial expressions—micromovements of eyebrows, lips, and chins. It’s been a process of receiving and collaboratively deciphering wordless communications. Language has been a part of it, but therapy has represented something far more nuanced and broader—a healing experience in a present-moment, somatically felt, relational field. In my view, being a good therapist has always depended on staying rooted in layers of intelligence that live in and around the body, extending well beyond the mind. It’s a craft that can be learned, but it’s an art, too, and even a spiritual practice.

So what does it mean to be both a therapist and a technophobe when suddenly, in the span of weeks, all therapy is done online? I used to think these two variables had a random correlation, like sunburns and melted ice-cream. Even if they both happen on a hot day, it doesn’t mean they were related. Or does it? What if there’s more of a causal relationship than I previously thought? Maybe I’m not just a therapist who happens to dislike technology, as so many therapists do—maybe I became a therapist because I dislike technology. And if that’s the case—or even if it isn’t—where does that leave me, now, in the time of COVID-19, trying to help people love while I’m unconvinced that this new version of whatever I’m doing actually is therapy? What happens when a therapist technophobe needs technology to be who she is—or who she was, doing some alternate version of what she did?

There was this one moment I remember with my Google Hangouts couple when they were sitting on the couch in front of their floor-to-ceiling windows. None of us said anything. The session had ended, we’d finished talking about scheduling and payment, and we just looked at one another on the screen. It was as if we’d forgotten who was who. Was anyone the client, now, or the therapist? How would we say goodbye? It was a powerful moment. We were united in the uncertainty, through walls, across time, and it felt shaky and new.

***
Alicia Muñoz, LPC, is a couples therapist and author of No More Fighting: 20 Minutes a Week to a Stronger Relationship and A Year of Us: One Question a Day to Spark Fun and Meaningful Conversations. Contact: aliciamunoz.com.

I want to thank Alicia for expressing my feelings exactly! I can relate fully to her embarrassment, frustration and shame. This is a hard time to be in if we are therapists and technophobes. I don't think that this is about resisting change. Rather, it is about taking on something scary and anxiety-provoking and allowing ourselves to have all of our uncomfortable feelings as we do it. After all, how can we help our client's face and process their feelings, if we are not doing this hard work ourselves? Whether that is a fear of technology or anything else, for that matter.

This was an interesting article but what puzzled me is Alicia's seeming resistance to adapting to what life has thrown at us. Everything has changed for everyone, regardless of what they have trained to do or be. Like Alicia, I, too, would prefer to see my clients face to face. Some of my clients are also challenged by the technology and would prefer to see me face to face. However, that is not currently possible. So, I ask myself (and I invite my clients to ask themselves), is it in both our interests to stop therapy altogether because it cannot be delivered as we would ideally wish? OR is there something for each of us to learn about ourselves through the challenges of engaging in therapy in a less than ideal manner? After all, life is about change and those who adapt to change survive and thrive while those who do not - well, you know the answer to that.