February Quandary: My Angry Client is Getting to Me 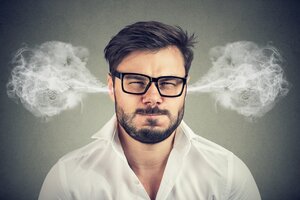 February Quandary: I’m treating Mark for anger issues, and find myself getting extremely reactive when he loses his temper in therapy. During our last session a few days ago, he called me “a joke” and stormed out of the room. I want to stand up for myself when he says things like that, but I don’t want to derail our work. Has anyone else faced something like this? What can I do to better manage my own emotions and help him?

1) Don’t Be Afraid to Speak Up

As clinicians, we often forget that we’re entitled to our emotions. We may feel that expressing our emotions or confronting the client may derail or undo their progress in therapy. However, expressing emotion in front of our clients is important for two reasons. First, it’s self-care for the therapist. Second, it models healthy self-expressions for clients. When we express ourselves in sessions with clients, the therapeutic relationship becomes a learning space for clients to remodel their expression of basic emotions, anger included.

In this case, I think it’s important to maintain a transparent relationship Mark. Here’s a simple, classic method that’s worked great for me in the past with clients with anger management issues.

First, I take ownership of my emotions and state clearly what I need. I find it helpful to set boundaries with my clients about healthy and unhealthy expressions of anger. When I feel a boundary has been crossed, I address it in the moment and discuss how it’s impacting the therapeutic relationship. In the next session, I might say something like, “Let's discuss what happened in the previous session. You made a remark and stormed out abruptly, and it left me feeling confused about where our session was headed. I'd like to know your side of the story and mutually decide certain boundaries for the upcoming sessions. Let's try and respect each other's boundaries.” Saying something like this to Mark might also help diffuse the formation of a power dynamic between us.

If this therapist finds they still need more clarity, I’d suggest they talk to a supervisor or colleague. Hopefully, in time, this therapist’s level-headedness will set an example for Mark to follow: that it is possible to express our anger while remaining in control.

2) Defense Mechanisms Deserve to Be Explored

When a client I’m working with becomes angry, I try as much as I can to remember that it's all “grist for the mill” as Irvin Yalom would say. What’s happening in this session with Mark, both within the therapist and between the therapist and Mark, is likely a reflection of how others experience Mark and how he acts in his relationships with them. His storming out is a defense mechanism, and defenses deserve to be explored.

I'm all about transparency because I feel it's helpful to the therapeutic relationship. If Mark was my client, I’d attempt to review the previous session in the following one, first focusing on his own experience. I might say something like, “What was going on for you? You seemed frustrated with how our session was going. Tell me about that.”. Then, I’d offer my own experience of working with him: “I'll be honest, Mark. I've noticed myself becoming angry, irritated, and frustrated during our interactions. I take responsibility for my own feelings, but I also believe it's important to explore why those feelings are there.” If Mark appears receptive to this feedback, I might ask about his experience of interacting with others and whether anyone has said something similar. If that’s the case, then we’d move to explore this in more depth, as well as any transference that might be present.

I'd also be open to discussing with Mark whether it's possible that, because our sessions are so activating for both of us, working with a different therapist might be more suitable for him. Sometimes these conversations open a useful dialogue and exploration of therapy that moves the work forward. However, I’d make sure to approach this gently, as some clients might perceive this as a rejection. I’d present it as an exploration: “How are you feeling about our relationship in general, Mark? Do you feel your needs are being met in here? If not, do you ever feel like you would work better with a different therapist?” If Mark says yes, I’d show him that I don't take it personally.

Sometimes people act out in sessions with the subconscious intention to be rejected, because they've experienced this in other relationships and it may oblige a self-fulfilling prophecy. Other times, they may act out because they want to reject the therapist but are afraid to do so outright, leading the therapist to do it for them. Either way, it's a defense used to avoid the possibility of intimacy and vulnerability. It’s important that we remember our clients’ anger often isn't about us, but about them and their defenses.

Since this therapist purports to deal with "anger issues,” I think it’s important that she not be quick to take things personally, especially expressions of anger. She needs to realize that Mark’s expressions are his predominate defense mechanism for pushing people away. My advice to this therapist: don’t be pushed away! Instead, if Mark is willing to return for another session, gradually and calmly—but assertively—make this clear to him: that you see his angry outbursts as a defense, and that you see it as his way of keeping people at a distance. It sounds like Mark might have significant attachments issues, so if he’s successful at keeping you, his therapist away, it could send the message that he can keep anyone away! Don’t shy away from the problem. Instead, keep him engaged for his own good by staying calm and helping him work though his defenses.

This is no simple task, but a necessary one for any clinician who works with attachment disorders. Moreover, it’s important to remember that it’s likely anger is simply what Mark used as a child as a way of proving his belief that no one is trustworthy or will see him through his struggles. As his therapist, this clinician needs to be the exception. Stay with him and help him see how this distortion is keeping him isolated. This therapist may be the first person in the world to hold up this distortion to Mark as just that—a distortion. I’d highly advise that she not run from this opportunity for great therapeutic change.

I empathize with this therapist's feelings of upset at the choice of words Mark is using to challenge her. Our own anger can indicate when our values are being challenged or when a boundary has been crossed. Hopefully, Mark’s therapist can detach from this personal attack and use this situation for both her and Mark to gain a deeper understanding of the real message behind it.

Practicing as much empathy as I could, I’d be curious what Mark’s anger is trying to say. My first thought is that Mark’s anger may be based in fear. Could he be uncomfortable with the intimate nature of the therapeutic relationship or the fear of revealing his underlying thoughts and feelings? Is Mark projecting a fear that his therapist may laugh at him—that he is that "joke," as he put it? Mark may be more comfortable pushing people away when he’s faced with uncomfortable feelings. This outburst could present both Mark and his therapist with an opportunity for him to find a new way to interact with the world.

5) Do Some Skill Building

I've been running anger management groups for most of my career. When a client gets angry in a session with me, I view the reaction as a wealth of information and a path to deeper discussion. In this case, I might proceed by exploring triggers with Mark. What was said just prior to his anger? Where is the root of those emotions? What do the emotions remind Mark of? For example, he could have grown up with a highly critical parent, and a statement I made might’ve reminded him of that parent.

When I ask my own angry clients these questions, I often get responses like, “It reminds me of a time when I was 10 years old and I was talking to my dad about something. Then he criticized me and called me a clown." I try to elicit more of that story, then attempt to validate the client's feelings by saying something like, "I can understand how you may have felt angry, hurt, disappointed, or judged." I also ask clients to verify whether I’m on the right track in pinpointing their feelings, and whether there may be other emotions behind their words or actions that can help me understand where they’re coming from better.

Once we’re on the same page, I’ll work with clients to practice healthier behaviors when they get triggered. For example, we might work to help them develop more awareness of their triggers, recognize which emotions are being triggered when, and practice self-compassion and relaxation techniques. I might also suggest that when the clients find themselves becoming activated, they allow themselves a time out (of predetermined length) to calm down. Maybe it’s a 10-minute break in which they clear their head, so they can return to whatever discussion they were having to better communicate their feelings.