Saving My Younger Self 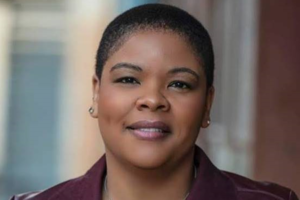 Therapists who grew up in the communities of color they serve often have the social capital and particular wisdom to better understand clients’ core needs, make therapy accessible and meaningful, and teach others how to competently provide services. Their knowledge can be especially valuable to the kids in these neighborhoods who are struggling in their families and schools, and to the teachers who try every day to do what’s best for them. In this interview, Black Therapists Rock member Nicole Thompson takes us on her own journey from a Philly kid steeped in adversity, to an urban school psychologist who’s gone back to the old neighborhood and found her calling.

Psychotherapy Networker: What got you interested in becoming a therapist?

Nicole Thompson: It was a mixture of things. One was my childhood. I grew up in a very poor part of Philadelphia and had a lot of adverse childhood experiences, so I wanted to help kids who were like me. I just didn’t know how at first. I spent two years pursuing a nursing degree before finding my calling in psychotherapy. It happened when I took a Psych 101 class and read about Maslow's hierarchy of needs: it really resonated with me.

PN: Was mental health discussed much when you were growing up?

Thompson: Not in the neighborhood where I grew up, and certainly not in any detail. When people had what I know now were mental health issues, I’d hear things like, “They're crazy” or “They're a little off.” Psychology, therapy—that was never mentioned at all.

Today, I’m an urban school psychologist. My specialty is teaching educators how to better serve urban students impacted by trauma, a lot of which stems from violence: physical fights among peers, domestic violence within the family, or violent crimes within the community. This type of trauma often manifests in the classroom in the form of aggressive, hypervigilant, and noncomplying behaviors. I tell educators that the best way to manage these behaviors is by demonstrating a pattern disrupt. In other words, acting contrary to what they expect of you. For example, if a student is being nasty and disrespectful, remain calm and understand that the lashing out is likely not about you at all.

PN: When you first started out in the field, did you feel prepared?

Thompson: Absolutely not. I was book-prepared, yes. But that only gets you so far. When I started my clinical internship in the Philadelphia suburbs, it felt like I’d been dropped on some sort of island and had to figure it out alone. I had to figure out who I was professionally, how I wanted to show up for my students, and more importantly, how they’d benefit from having me in the building.

Over time, I found my way, but it just didn’t feel like home in the suburbs. So when I applied for jobs after my internship, I decided to work in the same district where I grew up. It’s also where I live now, so I’m really passionate about effecting change, because it affects me and my family.

I’d love to see more passionate educators work with urban populations, educators who value this particular population and know that there are many geniuses in the ‘hood. I was lucky enough to have teachers like these, so I know they exist. We just need more of them. Sadly, a lack of resources and other systemic problems cause many of these teachers to leave the urban-education field too soon. I think one way to keep them in these vulnerable communities is to step up training around trauma-informed care and make them feel supported.

PN: It sounds like you have a real attachment Philadelphia and the people there.

Thompson: Very much so. I contributed to an anthology a few years ago called Black Therapists Rock: A Glimpse Through the Eyes of Experts. My chapter is titled "Saving My Younger Self," because that’s always been my passion—to save my younger self, to save people who look like me and were born into challenging circumstances that might’ve changed if they’d had someone like me in their life. That's why I didn’t leave Philadelphia: it’s me, and I’m Philly.

PN: Tell me about an especially memorable moment from early in your career.

Thompson: I remember talking to a student during my second year on the job. This boy was telling me how rough he had it and what he was going through. At the end of our session, he said, “You wouldn’t understand.” I asked him why he felt that way. "Because you dress too fancy," he replied.

In that moment, I realized how these kids see you is so much different than how you see yourself. You might see yourself as this down-to-earth person. You know your struggles and what you've been through, but they don't. That was a defining moment: I realized that I needed to share more with kids, so they could know I've been where they are. I wanted them to see that I rose above my circumstances and stayed resilient in the face of it all. As a school psychologist, I test for learning disorders and such. But if I’m only doing that, students will never get to know me.

After that experience, I organized a school assembly where we highlight the accomplishments of prominent black women every February. Currently, it’s on its third year. I also started a mentorship group between teachers like me and students. Tons of students started coming to me out of nowhere, sitting down, and spilling their guts about all the horrific things they’d experienced. I realized then that they needed to know there was an adult they could relate to. I wanted them to think, Here's someone who’s just like us. Our folk.

PN: How would you describe your therapeutic style?

Thompson: I treat all my students as if they were my kids, because that's how I feel about them. I have kids, and I know that’s how I’d like their teachers to treat them. Some of the students actually call me Mom, or even Grandma, affectionally! It speaks to our connection. It speaks to what I do and all I’ve learned as a person and specially as a black therapist.

PN: So how did you become acquainted with Black Therapists Rock?

Thompson: Deran Young, the founder, and I met in the Air Force. I joined when I was about 20 as part of my nursing career track. When we got out, we kept in touch. Then in 2017, she started the Black Therapists Rock Facebook group and invited me to join. When I say I was impressed by her mission, I really mean it. I knew her heart, and I knew what she could accomplish. I was sold.

I’ve made so many friends since joining BTR. I even took a cruise to the Bahamas with Deran and the other authors of the BTR anthology! I consider myself an introvert, so professional connections were never something I sought out. BTR made me open to that experience. It was my first experience being with therapists who were all black. When you make a connection like that, with like-minded people, you grow so much. You grow each other. It’s almost like we’re doing therapy with each other!

Beyond that, BTR is raising awareness that it’s okay to go to therapy, that being open with each other is part of the human experience. It’s amazing to be a part of that. It feels like family.

PN: How about outside of work? What do you do for fun? For self-care?

Thompson: For me, self-care is hanging with friends. My closest ones are from BTR. We teach each other so much. I also love hanging with my kids. I’ve got four, and we love to travel, to take road trips. I have an adventurous spirit. I’ll say to the kids, “We're leaving on this date, and we're going here.” I can drive up to 12 hours before I get exhausted, so I’ll go on Google, find a good end point, and just go. So far, we’ve done two cross-country trips.

PN: What would you like to see for future of psychotherapy?

Thompson: My hope is that it’s headed toward social justice, diversity, and inclusion. I work constantly and consistently to improve the education of so many brown kids from urban areas, and there are just so many inequities from the system, all the way down to the smallest things. But I'm impressed with the way that the field is moving, because it seems like more people are starting to really understand this.

Speaking as a school psychologist, my dream is that more teachers realize education isn’t one-size-fits-all. Not all kids learn the same. We're all from different cultures, but we’re all connected. We need to keep this in mind. In therapy and in education, our work is all about love.