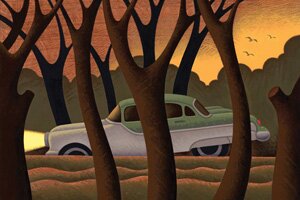 My dad had a two-toned, turquoise and white 1956 Pontiac. As soon as I was of legal driving age, those wheels replaced the bicycle as my freedom machine. Whenever I got the chance, I’d take off to explore the warren of back roads surrounding the town that restrained me. Don’t get me wrong. Des Moines wasn’t such a bad place to live: in fact, for Iowa, it was quite a metropolis. But city life was too humdrum. Give me the open road anytime.

Luckily, the late ’50s witnessed a surge of dual-career couples, which assisted my flight toward the freedom I craved. After my brother went off to college, my mom traded in her apron for a businesslike blouse and skirt, selling housewares in the bustling aisles of Miller and Paine department store, Des Moines’s answer to Macy’s. My dad, a minister, spent long days in the study of his parish, dutifully preparing his sermon for the following Sunday.

In my eyes, this arrangement was perfect. With my brother at college and my parents both at work, I was free to create my own life. What could be better, especially when my dad lent me the car at night? Whatever little boundaries remained in my life at that time, I was more than willing to push.

This particular evening, my folks had settled down to the new American regimen of watching TV after a hard day’s labor. Instead of imagining Ozzie and Harriet, as we used to when gathered around the radio, we could now see them on our 12-inch Zenith, if the rabbit ears were adjusted just right.

But I’d grown tired of Ozzie and Harriet, so I telephoned my buddy Deeter, grabbed the keys to the Pontiac, and sprang out the door before Dad could reconsider his decision. It wasn’t long before Deeter and I were well beyond the city, the Iowa countryside deepening around us as we drove. The lights of the few farmhouses in the vicinity glowed in the distance like jack-o’-lanterns, and only the sweeping tunnel of our car lights fought off the darkness. We had no destination—all we’d wanted to do was drive.

Eventually, we came upon the ghostly shadows of an isolated cement plant and spotted a barely visible dirt road off to the left—basically, two tire tracks overgrown with weeds that stretched through a dark copse of trees into a tangled forest beyond.

“Where do you suppose it goes?” wondered Deeter.

Deeter and I looked at each other, almost daring the other to give the go-ahead. Then together, we nodded our somewhat hesitant agreement: this deserted road was the perfect mystery for us to investigate.

Now a ’56 Pontiac was built for style—a huge, showy tank of a car, made to cruise the new interstates that Ike was building all over the country. It was definitely not a jeep. With its low-slung clearance, it scraped every rock on that dirt lane. Undaunted, we slowed down to about five miles per hour and plowed ahead, straining to see the path as our headlights were gobbled up in the murky shadows.

Further and further we ventured into the midsummer darkness, the rhythmic chirping of crickets louder than the engine itself. Although the deepening mystery was tantalizing, it soon began to dawn on us that there was no place to turn around. The surrounding forest hemmed us in. The taillights were too dim to back up safely. So we had no choice but to proceed onward, into the blackness, occasionally glancing at each other with apprehension.

Finally, the headlights lit up a small clearing about 50 feet in front of us. Maybe we could turn around here and give up this expedition, which was feeling increasingly risky. As we drove into the clearing, however, our relief turned to dread as the car began to sink, slowly but inexorably, axle deep in mud.

I tried to gently give the car some gas, but the wheels spun out in protest.

“Maybe if you rock it,” Deeter suggested. That’s not easy to do with an automatic transmission, but I threw it into reverse, then drive, then reverse. No dice. The behemoth only sank deeper. Finally, I gunned the accelerator in one last desperate attempt to escape. The motor wined and complained—and the car settled even further into the muck.

For a few moments, we sat there in disbelief, looking at each other. Then the headlights dimmed as the battery began to run out of juice. Quickly I shut them off. Blackness surrounded us. I turned on the parking lights in hopes they wouldn’t drain the battery, and we stepped out gingerly into the mud to assess the situation.

As we slogged around the car and crouched by the tires, I wondered what my parents were thinking. It was time for us to be home, but here we were, miles from nowhere, in the middle of the night, on a sinking ship. I envisioned my frantic mom staring anxiously at the phone and waiting for it to ring, as my dad tried to reassure her—and himself—that we could take care of ourselves. Oh well. There was nothing to be done about that now, no way to get ahold of them...

Read the rest of this article here.