In Spite of Loss, Learning to Find Joy Where You Can 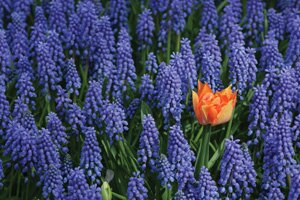 After Julie learned that she was dying, her best friend, Dara, wanting to be helpful, sent her the well-known essay “Welcome to Holland.” Written by Emily Perl Kingsley, the parent of a child with Down syndrome, it’s about the experience of having your life’s expectations turned upside down:
----------
When you’re going to have a baby, it’s like planning a fabulous vacation trip—to Italy. You buy a bunch of guide books and make your wonderful plans. The Coliseum. The Michelangelo David. The gondolas in Venice. You may learn some handy phrases in Italian. It’s all very exciting.

After months of eager anticipation, the day finally arrives. You pack your bags and off you go. Several hours later, the plane lands. The flight attendant comes in and says, “Welcome to Holland.”

“Holland?!?” you say. “What do you mean Holland?? I signed up for Italy! I’m supposed to be in Italy. All my life I’ve dreamed of going to Italy.”

But there’s been a change in the flight plan. They’ve landed in Holland and there you must stay.

The important thing is that they haven’t taken you to a horrible, disgusting, filthy place, full of pestilence, famine, and disease. It’s just a different place.

So you must go out and buy new guide books. And you must learn a whole new language. And you will meet a whole new group of people you would never have met.

It’s just a different place. It’s slower-paced than Italy, less flashy than Italy. But after you’ve been there for a while and you catch your breath, you look around...and you begin to notice that Holland has windmills...and Holland has tulips. Holland even has Rembrandts.

But everyone you know is busy coming and going from Italy...and they’re all bragging about what a wonderful time they had there. And for the rest of your life, you will say, “Yes, that’s where I was supposed to go. That’s what I had planned.”

And the pain of that will never, ever, ever, ever go away...because the loss of that dream is a very, very significant loss. But...if you spend your life mourning the fact that you didn’t get to Italy, you may never be free to enjoy the very special, the very lovely things...about Holland. "Welcome to Holland" made Julie furious. After all, there was nothing special or lovely about her cancer. But Dara, whose son had severe autism, said that Julie was missing the point. She agreed that Julie’s prognosis was devastating and unfair and a complete departure from how her life was supposed to go. But she didn’t want Julie to spend the time she had remaining—perhaps as long as 10 years—missing out on what she might still have while alive: Her marriage. Her family. Her work. She could still have a version of those things in Holland.
---------
To which Julie thought, Screw you.

Because Dara would know.

I’d already heard about Dara from Julie, the same way I hear about all of my patients’ close friends. I knew from Julie that when Dara was at her wits’ end with worry and grief over her son’s endless hitting and head-banging, his tantrums, his inability to have a conversation or feed himself at four years old, his need for multiple weekly therapies that had taken over her life but also didn’t seem to be helping, Dara would call Julie, despondent.

“Now, I’m embarrassed by this,” Julie said after she explained her initial anger toward Dara, “but when I saw what Dara was going through with her son, my biggest fear was to end up in her situation. I love her so much, and I also felt like any hope for the life she wanted had died.”

She told me that for a long while, Dara would say, “I didn’t sign up for this!” and catalog all the ways in which her life had been irrevocably changed. She and her husband would never have cuddles and carpools and reading stories before bed. They would never have a child who would grow into an independent adult. Dara would look at her husband, Julie said, and think, He’s an amazing father to our son, but she couldn’t help contemplate the amazing father he would have been to a child who could fully interact with him. She couldn’t help the sadness that would descend when she let herself think about the kinds of experiences they wouldn’t be able to have with their child, ever.

Dara felt selfish and guilty for her sadness, because she wished most of all that her son’s life could be easier for his sake, that he could live a fulfilling life, one with friends and lovers and work. She felt enveloped by both pain and envy when she saw other moms playing with their four-year-olds at the park, knowing that in that situation, her son would likely lose control and be asked to leave. That her son would continue to be shunned as he grew older, and so would she. The looks she got from the other moms, the ones who had typical kids with typical problems, added to her sense of isolation.
Dara phoned Julie often that year, each call more hopeless than the previous one. Depleted financially, emotionally, and practically, she and her husband decided not to add a sibling to the mix—how could they afford and have time for another, and what if that child also had autism? She’d already stopped working in order to manage their son’s life while her husband took on an extra job, and she didn’t know how to cope. Until one day she came across “Welcome to Holland” and realized that she would have to not only cope in this strange land but find joy there where she could. There were still pleasures to be had, if she could let them in.

In Holland, Dara found friends who understood her family’s situation. She found ways to connect with her son, to enjoy him and love him for who he was and not focus on who he wasn’t. She found ways to stop obsessing about what she did and did not know about tuna and soy and chemicals in cosmetics during her pregnancy that might have harmed her developing baby. She got care for her son so that she could care for herself and do meaningful part-time work and have meaningful downtime too. She and her husband found each other and their marriage again while also struggling with the challenges they couldn’t change. Instead of sitting in their hotel room the whole trip, they decided to venture out and see the country.

Now Dara was inviting Julie to do the same, to look at the tulips and Rembrandts. And after Julie’s anger about “Welcome to Holland” subsided, it occurred to her that there would always be somebody whose life seemed more—or less—enviable. Would Julie trade places with Dara now? Her first instinct: yes, in a heartbeat. Her second: maybe not. She’d come up with various scenarios: If she could have 10 great years with a healthy child, would she take that over a longer life? Is it more difficult to be sick yourself or to have a child who is? She felt horrible even having these thoughts, but she couldn’t deny them either.

"Do you think I'm a bad person," she'd ask, and I'd assure her that everyone who comes to therapy worries that what they think or feel might not be "normal" or "good" . . .

Read the rest of this article here.

This blog is excerpted from the March/April issue's "Welcome to Holland," which is from the book Maybe You Should Talk To Someone: A Therapist, Her Therapist, and Our Lives Revealed by Lori Gottlieb. Copyright © 2019 by Lori Gottlieb. Published and reprinted by permission of Houghton Mifflin Harcourt. All rights reserved. To read the full version of "Welcome to Holland," click here.