March Quandary: My Client is Being Bullied and Her School Won’t Help! 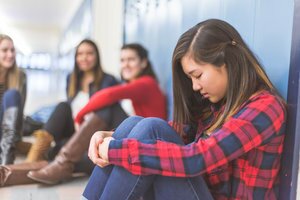 March Quandary: My client Raisa is a sophomore in high school. She says the girls in her class are bullying her with insults like “slut” and “whore.” The mother has been in touch with the school, but the administrators said there’s not much they can do and that teenagers say things like that. Raisa is incredibly distressed by it all. How can I help her?

I spent many years as a high school social worker, and I don’t agree that there’s nothing Raisa’s school can do about bullying. In New Jersey, where I practice, the law requires that schools take action on bullying.

If I was Raisa’s therapist, I’d have her parents ask school administrators to have a social worker, psychologist, or guidance counselor speak with the bullies. Besides making the bullies aware of the consequences of their behavior, they need to get to the bullies’ pain, which I believe motivates the bullying. Maybe they’re bullying to feel accepted by their peers, out of jealousy, or because they’ve been bullied themselves, either by peers or at home. If talking with the bullies isn’t effective, their parents should be made aware of what’s going on and the local laws around bullying prevention.

As Raisa’s therapist, I’d help her examine her pain and perhaps find a way to express it to one of the bullies. As a group, they might be too powerful to confront. Alternatively, a school counselor could bring the parties together to try to resolve the issue after talking with each side individually. While Raisa could be totally blameless, as bullied students often are, I might also have her examine her behavior to see if anything could’ve triggered the bullying. Either way, bullying has triggered suicides and homicides, and should never be ignored or taken lightly.

As a therapist who’s worked with adolescents for many years, I can relate very well to this quandary.  For me, my caretaker urge to jump in with solutions sometimes gets in the way of taking a step back, reflecting on what’s getting triggered in me, and remembering to consult with other therapists. Developing an awareness of our own reactions deserves praise.

In this case, I think it’s important to not be neutral and to state clearly that words like slut and whore are hurtful and not okay. That said, I think it’s important to explore and process with Raisa what she finds most hurtful about these words. Does she want to be able to be sexually active without being shamed and insulted? Do these particular words just happen to be the ones that girls in her school use when they want to reject, condemn, or isolate others? In other words, what meaning do these words contain?

Only after processing these feelings with Raisa would I ask her how I can best be of help, and what kind of help she doesn’t want. Asking these questions is important because it keeps the work collaborative, supports Raisa in staying in charge of her problem, and helps her develop problem-solving skills that work specifically for her. Maybe she decides to reach out to certain peers who could become allies. Maybe she wants me to help her talk to the principal or a teacher she likes to better express her feelings and needs to them. Or maybe she just wants to be able to have an outlet for her feelings with a safe adult who doesn’t need to do anything.

If I was Raisa’s therapist, I’d want to first help her process her reactions to the bullying. Chances are she fears the girls who’ve insulted her. She might also feel anger at the injustice of false accusations. Next, I’d help her identify a sense of who she is, and how she defines her strengths, values, and character. If she doesn’t already think so, she’ll hopefully soon find out that she’s not the things these girls call her.

Once Raisa feels confident about who she is, I’d want to help her explore ways to respond to these girls. Seeing as how she’s already told her mother, and her school has been hands-off, Raisa might respond well to the message that the only thing she can control is her reaction. Responding in kind with anger, hostility, or revenge might result in more of the same.

If Raisa fears standing firm in the face of this bullying, I’d want to help her explore what’s feeding this fear to make it worse. Together, we’d come up with a plan. I might help her use the anger she feels constructively to move the plan forward, whatever that might be.

Assuming confronting the girls about their behavior isn’t going to work, I might also help Raisa find ways to focus on the healthy friendships she has to counteract the negative experiences she’s having with these bullies. In this way, we minimize their importance.

The most fundamental issue facing Raisa, her family, and her therapist is the response of the school. It’s a core symptom of the problem. Any individual intervention you might suggest in the absence of systemic programing focused on school climate is unlikely to diminish ongoing harassment, intimidation, and bullying. In the face of the school’s apparent abdication of responsibility, the first order of business is to let Raisa and her family know what you all are up against and adjust your actions and expectations accordingly.

If I was Raisa’s therapist, I’d point out that what Raisa’s bullies are doing is used by some children to climb the social ladder. This means their behavior is maintained by relevant peer groups who set social norms and expectations, regardless of whether they conflict with their personally held beliefs. Here, my goal would be to provide a framework for understanding that might inoculate Raisa somewhat from internalizing the negative messages she’s receiving. I might help her map the full range of social groups and cliques that exist in her school to see whether there are other groups where she might find more support and acceptance. School-based clubs and teams and extracurricular activities in and outside school are some examples.

Beyond this, it might be worthwhile to see whether the local school board or the state department of education has standing policies that contradict the position taken by Raisa’s school. This, in turn, might set the stage for Raisa and her family to become more engaged in a process of reform that would do much to empower them.

Bullying, at the core, is grounded in power and the abuse of power. Resolving or reducing bullying by others can be complicated, but there are strategies that work. If I was Raisa’s therapist, I might explore one or more of the following options.

First, I might coach Raisa on how to be more assertive if she has trouble standing up for herself, as many bullied kids do. We might do role-plays so she develops skills to speak up when she feels attacked. Second, I might teach Raisa more self-awareness, if that seems like an issue. For instance, I might ask Raisa if there’s anything in her behavior or mannerisms that seems to invite bullying. Third, since bullied kids often struggle with self-esteem and self-confidence, I might encourage her to join activities that help her develop awareness, confidence, and self-esteem. If she finds new friend groups along the way, this could also help reduce the bullying, or at least its effects.

While reporting bullying can sometimes make it worse for the student, especially if the school doesn’t have a system in place that discourages it, not telling Raisa’s teachers about it will likely empower her bullies. At a minimum, when we report, we create a paper trail that alerts the school to this bullying being a wider issue—or, in more extreme cases, one that can be presented to police or courts.

Last, I’d advise that Raisa “work with the village” as I like to call it, dialoguing with her parents and teachers about how to best support her without being intrusive, investigating the bullying without worsening it, and creating a plan that helps her take control. Unfortunately, bullying is a normal part of human society, but it can lead to all sorts of problems, including suicidal behavior, psychiatric problems, and criminal behavior from bullies in later life.

April Quandary: Fourteen-year-old client Tyler’s parents brought him to me for therapy recently because of what they interpret as antisocial behavior. They say he rarely engages with classmates or teachers, isn’t interested in extracurricular activities, and heads straight to his room after school to play video games. They worry he’s depressed. Part of me wants to nudge Tyler toward more social behavior, but he’s mostly responsive in therapy and insists he’s happy. Is this just the moody teenage years at work? What should I do?

Raisa’s situation unfortunately feels increasingly common. In my work with parents and emerging adults, I see bullying really impacting the emotional well-being of kids, more often than Not. In Raisa’s situation I would take an empowerment and resiliency informed approach- with the parents, with Raisa and the school, because bullying isn’t the individuals problem, it’s a societal and potentially public health issue. So I would gather information about the details of the bullying from Raisa primarily, assess how she is coping, talk with her about feeling empowered to stand up, be assertive as a young woman and involve the parents in partnering with her, bolstering her efforts. I would also talk with the family, help them learn about bullying - state and school based laws, connect with the principal, the authorities at the BoE level and potentially facilitate an investigation. If the school is responsive, involve a HIB coordinator ( at least in NJ) and facilitate systemic response to bullying. I have also encouraged parents to contact organizations like SPaN if matters need to be escalated. The key message I would want to help Raisa and her family grasp is that bullying is unacceptable, but it’s a nfortuantely common and they can do something about it. The skills that I would focus on with Raisa would be to regulate her emotions, know she is loved, accepted and cared for even when some peers are mean, tune into a healthy and loving friendship and support network and continue to work off her strengths to manage the various acts of bullying. I would take the focus off the particular behaviors and highlight how this bullying experience can be part of life learning for her.