An Unusual Program is Helping Vets Rewire from War 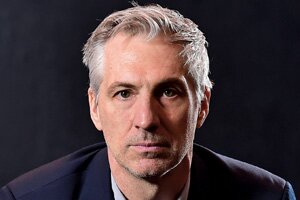 Therapists know that words can heal: they offer the “talking cure,” after all. But what if the words were in iambic pentameter and delivered from a stage? More specifically, could performing Shakespeare be considered a clinical tool in trauma treatment?

Enter, stage left, First Gulf War–era veteran and professional actor Stephan Wolfert, who is now testing a PTSD intervention that for decades has been pairing classical theater training with the science of trauma.

Wolfert’s autobiographical one-man play, Cry Havoc, was a highlight of the 2018 Psychotherapy Networker Symposium, and his acting intervention, De-Cruit, which is currently being evaluated at New York University, is showing impressive early results. A novel combination of mindfulness, narrative therapy, resilience training, exposure, psychodynamics, community building, and the plays of Shakespeare, De-Cruit teaches vets how to take to the stage to disentangle themselves from their soldier training, process their experience at war, and connect with the very different reality of being home.

RH: Plenty of modern theater takes on trauma. Why, in this day and age, are you championing Shakespeare as a conduit to healing?

Wolfert: Because it worked for me. As I say in Cry Havoc, I didn’t realize, after a friend of mine was killed at a military training center, that I was having a psychotic break. Drunk somewhere in Montana, I ended up hopping off a train and wandering into a performance of Richard the Third. If you know the play, you know Richard was a veteran of war. I didn’t know that at the time. All I remember is a guy in uniform walking out on stage, looking me directly in the eye, and saying, “The war is over, and there is a time of peace, and it’s fantastic. Everyone’s happy, except me, because I feel deformed, because I don’t fit in, because I’m not attractive. I don’t even like peace.”

That was it. I left the army and went to graduate school for acting. Then I started reading Shakespeare and found that he wrote about and, in fact, was surrounded by veterans. When he was writing Hamlet, Henry the Fifth, As You Like It, and Julius Caesar, England was in two wars: a conventional war with Spain, with cold war components to it—similar to what I went through—and the Nine Years’ War with Ireland, which was mostly guerrilla warfare. They have ballads in England about men who came home from Ireland but never “fully” returned.

In Shakespeare’s speech for Lady Percy in Henry IV, Part 1, she asks her husband, who’s back from battle, “Oh my good lord, why are you thus alone?” What follows are questions about his behaviors that read like a DSM listing of PTSD symptoms.

RH: You talk about the need for a “de-cruiting” process for soldiers like you who’ve been “wired for war.” What do you mean by this?

Wolfert: It means the military rewires the central nervous system and creates automatic, mind–body responses to war stimuli. For example, outside the military, if you hear bullets flying over your head, you may instinctively duck and take cover, but that instinct is rewired in soldiers, so that we respond to it with violence instead. In the infantry, when we hear a rifle shot, we immediately locate the general vicinity it came from and return fire in that direction.

It’s all automatic—just like saluting without thinking. In basic training, they drill these automatic responses into us, but when we get out, we don’t have eight weeks of basic untraining. We don’t learn how to leave those responses behind.

RH: Are you contending that a focus on classical acting training helps with this rewiring?

Wolfert: Yes, I am. And our scientific evaluation is proving it. The basic tenets of theater are medicine. Yvette Nolan talks about this in her book Medicine Shows. Further, classical actor training contains some of the most successful components of therapy, such as camaraderie in a creative, expressive, and healing environment; mindfulness and raising self-awareness without judgment; and Shakespeare’s heightened language, written in our natural human rhythm, which provides a certain aesthetic distance from our own experience, making us feel safer to disclose. These components are similar to those the military used to wire us for war, so I’m using them to rewire from war.

RH: In the case of PTSD sufferers, you might be taking them out of the fight-or-flight state they experience every day?

Wolfert: Being in front of an audience feels like life or death. Just like Shakespeare’s characters, we think something, or we feel something, and we speak it out loud to a room of strangers. There’s a power in that, releasing our stories, and having that experience rewarded and reinforced by a group or an audience. Then, when we’ve survived that heightened experience of sharing our trauma out loud, we’ve not only taught our body that we’ll survive reliving that event, but we’ve also begun to rewire the brain out of that continual state of fight or flight.

RH: What does it do for veterans, casting aside social buffers like that?

Wolfert: Once we’re in that place, we begin really expressing ourselves. The three questions I’m always asking them are: What do you feel? Where in your body do you feel it? And when else have you felt that way? This helps them start to track their habits and default modes. Going deeper, I do writing prompts aimed at taking on significant events in our life. Like Bessel van der Kolk talks about in The Body Keeps the Score, instead of merely repeating our own reel, the act of writing it out changes things.

RH: So I’m going to better see my trauma simply by turning it into a narrative?

Wolfert: And by getting it on paper. Sometimes when we do longer programs, we have vets read each other’s works, so they can also hear it.

RH: What you’re doing sounds a lot like exposure, but with a twist of built-in relaxation and detachment. What’s your message for therapists about the power of a theater intervention like this?

Wolfert: I always encourage therapists to bring art into their practice. And it can be in whatever form they’re most passionate about. Obviously, I’m partial to theater because it works for me. But I also feel that theater has a special power because it connects us with everything—our bodies and our emotions.