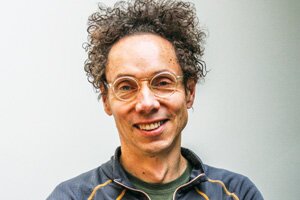 Even if you’re not one of the millions who’ve cracked his books, read his articles, tuned into his podcast, or listened to his talks, you’re still probably aware of Malcolm Gladwell as someone who’s carved out a distinctive cultural niche as a kind of entrepreneur of challenging perspectives and intellectual adventure stories. In recent years, he’s evolved from being just a wildly successful author to becoming a seemingly nonstop, multiplatform purveyor of striking, counterintuitive ideas. His work pivots on a kind of conjury, a flair for mesmerizing audiences into rediscovering the familiar and thinking about it in surprising, often fascinating new ways.

There’ve been the five bestsellers: the Big Idea books The Tipping Point, Blink, Outliers, and David and Goliath; along with What the Dog Saw, a selection of essays pulled from his more than 20 years of writing for The New Yorker. And now we have three seasons of him looking anew at the past in his entertaining podcast, Revisionist History, which debuted at number one on iTunes. Named one of Time magazine’s 100 most influential people, Gladwell has tallied more than 14 million views for his TED talks, and somewhere in his West Village apartment is a ribboned medallion bestowed upon him by Queen Elizabeth’s Canadian rep for being the kind of shining example of a human being who’s awarded membership in the Order of Canada. Come March, he’ll be a keynoter at the 2019 Psychotherapy Networker Symposium.

Gladwell’s signature style—weaving story with theory and research that alters our standard take on how human beings actually behave and how the world really works—has had such an impact that it’s become its own adjective: Gladwellian ideas and insights upend widely accepted presumptions that most of us never think to question.

It’s Gladwell who made pervasive the idea that an abundance of talent or intellect is less a defining characteristic of virtuosity than a gifted musician’s or a computer genius’s willingness to put in 10,000 hours of practice. Then there’s the chapter in Outliers, based on some previously obscure study, that revealed the connection between age cutoff deadlines for Canadian youth hockey league players and their later athletic success. With his flair for explaining otherwise dull and complex scientific findings, Gladwell showed that the oldest boys within a given age category had such a significant developmental edge over their younger peers that they eventually comprised the bulk of the winningest teams. Through Gladwell’s deft repackaging, an academic researcher’s otherwise ignored work has led to the growing popularity of “redshirting” at school enrollment time, as countless parents hold children on the younger end of age requirements back in hopes of giving them a leg up.

With his characteristic self-deprecation, Gladwell claims that the best way to describe what he does is to serve as a “parasite,” translating the ever-burgeoning mass of psychosocial academic thought into engaging stories for the general public. However you categorize him, his work has earned him a presidential citation from the American Psychological Association for his success in boosting the field. While little-known research by social psychologists and behavioral scientists is his favorite source material, psychotherapists have occasionally attracted his attention. In the first chapter of Blink, he included the work of couples researcher and therapist John Gottman on predicting marriage success to help elucidate how our snap judgements can be uncannily on target.

In the memorable closer for the last season of his Revisionist History podcast, he interviewed psychotherapist Michele Press, president of the New York Analytic Society and Institute, about the concept of parapraxis, or the “Freudian slip.” Giving the conversation its special Gladwellian twist is how he illustrates the arcane topic with Elvis Presley’s repeated inability to get through “Are You Lonesome Tonight?”—a song he wrote about his ex-wife, Priscilla—without laughing.

A Canadian born in the UK to a British mathematician father and a Jamaican social worker mother, Gladwell plays his role as thought leader outside the US as well as within it. The Guardian insists that he’s responsible not only for the seminal impact of his own material, but also for the invasion, on both sides of the pond, of the “pop-idea genre” exemplified in platforms like TED talks, Big Think, and Brain Pickings. But if he’s now acknowledged for his ability to shape the global conversation, true to his Canadian heritage, he seems determined not to fall victim to the cardinal sin of ponderous self-importance. There’s a buoyancy to his intellectual style and public persona, an almost boyish enthusiasm for the striking discoveries he translates for the rest of us in his work.

Want to see Malcolm's storytelling in person? Don't miss his keynote at the 2019 Networker Symposium in March! Click here to register before prices increase!

Steven Hayes, a University of Nevada psychology professor and instigator of Acceptance and Commitment Therapy (ACT), notes that Gladwell is a valuable popularizer and reporter of the field. “I love and respect science writers,” Hayes says. “They have a huge impact on the culture, and good ones like Gladwell are to be nurtured.” Therapist Bill Doherty, a professor at the University of Minnesota and the past president of the National Council on Family Relations, calls what Gladwell does in his particular way “brilliant.” While emphasizing that in his own writing, he’s careful not to cherry-pick studies to make a point, Doherty also observes that Gladwell is doing something different from what a therapist or psychologist might. “Because his work is not nuanced from a scientific point of view, he’s going to attract critics, including me,” says Doherty. “But you have to accept his books for their genre, and his are pretty good.”

Doherty believes therapists interested in reaching a wide readership can take a page from Gladwell’s practice of getting out in front of live audiences to better understand the marketplace for ideas. “Gladwell has a sense of what the public is interested in, whereas many therapists and scholars write what they think the public is interested in,” Doherty says. “I’ve had clients mention him, which was surprising to me. I’ve had lots of self-help books brought up, of course, but rarely a book by a journalist. In an interview, Gladwell said his typical reader is a 45-year-old man who’s an engineer. It struck me that he makes psychological ideas appealing to men who see themselves as analytical—a group that psychology doesn’t reach much.”

Part of what makes Gladwell’s books unique is his talent for making the painstaking behind-the-scenes work of research so accessible. John Gottman and the functioning of The Gottman Institute were captured in such a way in Blink, an exploration of what underlies our unconscious or split-second decision-making. Gladwell wanted to illustrate the psychological concept of “thin-slicing,” the ability to make immediate judgments based on recognizable patterns. So he spent time in Gottman’s lab, as Gottman and his staff coded emotional expressions and dialogue and made predictions in the space of a single, filmed interaction about whether a couple was destined to stay together or break up.

Unlike writers who might take a look at some film and chat with the researchers, Gladwell settled in and attempted to do the thin-slicing himself, by analyzing the same tapes given to the graduate students, therapists, and researchers who undertake the Gottman trainings. Whereas Gottman and his staff have become expert at instantly recognizing the predictive patterns of negative couples’ interactions, Gladwell failed miserably at the task, finding that there was just too much emotional content to sift through in any conclusive way. “Gottman came at the issues sideways,” he writes with a touch of reverence, and has arrived at “a more efficient path to the truth.”

Lauren Dockett is senior writer at the Networker.

This blog is excerpted from "The Man Who Became an Adjective," by Lauren Dockett. The full version is available in the November/December 2018 issue, A New Generation of Clients: Is Therapy Keeping Pace?

In Gladwell’s broadcast about parapraxis, he reports that the song in question was not written by him; rather, was actually an existing song he did not care for, but was under pressure from others to record. In addition, it was not suggested that the accidental alterations in the lyrics were likely meant to assist the singer in laugh prevention. I enjoyed this article, and I feel sorry but still compelled to point out these factual errors. Carolyn Schneiderman