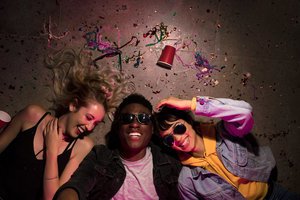 I don’t know why my parents are putting up such a fuss,” says Jenny. At 15, she regularly breaks her curfew, flirts with drugs, and is getting close to being suspended from her Manhattan public school. Today, she and her parents are in my office discussing the latest issue: New Year’s Eve is coming up, and Jenny and her posse have plans.

“So what exactly are these plans?” her mom, Mary Ann, wants to know.

Jenny shrugs. “You know, a party.” Tall with straight, auburn hair, Jenny dresses casually in jeans, a black sweater, and a knitted scarf hanging loosely around her neck. She’s down-to-earth, but is clearly in the cool crowd.

Mary Ann turns to me. “We can’t seem to get a straight answer out of her,” she says. “We need to know where she’s going, when, and with whom!”

Ever the good family therapist, I nudge them to talk about it with each other. “Get Mom and Dad to trust you about this, Jenny,” I say.

Mary Ann leans toward her daughter. “What time is this party supposed to start?”

A typically gifted teen litigator and obfuscator, Jenny responds, “Not so early, but it could be much later.”

At this, Jenny’s dad, Craig, practically shoots out of his chair. “Look, Jenny, we’re not stupid,” he says. “Just tell us what time!”

The parents’ eyes meet. “And when will it be over?” asks Craig, struggling to keep his voice even.

“It won’t be bad, Dad. Maybe four in the morning.” She flashes her most innocent smile. “Hey, guys, it’s New Year’s Eve.”

Mary Ann and Craig look like two volcanoes about to erupt. “And where, exactly, is this harmless party supposed to be?” asks Mary Ann through gritted teeth.

Hitting new levels of obfuscation, Jenny says, “You know, between here and the bottom.”

“The bottom of what?” shouts Mary Ann.

Craig whips his head toward me. “What in the world is she talking about, Ron?”

Trying to set a therapeutic path amidst the confusion, I say, “Jenny, I think your parents would like you to be slightly clearer.”

Jenny asks, “Do you mean the avenue, or do you want an address?”

The four of us keep volleying back and forth, with me trying to push the parents to show more authority, as my family therapy training had taught me to do, while her parents keep sputtering questions until Jenny finally blurts, “It’s somewhere near Times Square.”

Mary Ann spits out, “So who is doing the supervision? Hookers?”

“That’s it,” says Mary Ann. “We’re calling up the other parents to find out more about this!”

For the first time, Jenny sits straight up. “Don’t you dare,” she says, her voice suddenly steely. “None of the other parents know.” She glares at each parent in turn. “I told you all this, and now you’re betraying me. If you do this, I’ll never confide in you again.”

Trying to disguise my disorientation behind a veneer of therapeutic aplomb, I say, “Let’s take a break for a few minutes. I’d like the three of you to go out into the waiting room, sit and breathe a little.” As they file out of my office, I reflect that I’ve heard this same “dialogue” between parents and teens hundreds of times before, whether about New Year’s Eve or prom or another big night. Clearly, Mary Ann and Craig need to “parent-up” and tell Jenny what’s what.

Reflecting on the ubiquity of parental waffling, I become more determined to help Mary Ann and Craig establish credible authority. I call them in, asking Jenny to sit in the waiting room for a few more minutes. As soon as I begin my pitch for them to hold the parental line, Mary Ann begins to cry. “Ron, don’t even start with us,” she says. “What if she means it? What if she’ll never confide in me again?”

Craig joins in, “Jenny and I used to be close, but since she became a teenager I’ve felt awkward with her. I know she needs limits, but she hasn’t spoken to me about anything that matters in years. I’ve been benched, and I can’t stand it.”

Are the young adults in your practice often distracted? Are their grades slipping? Download these FREE, easy-to-use printable worksheets on managing ADHD in school!

In moments like these I feel the force of the culture flowing through me, shaping things in the consulting room at least as much as what’s going on clinically. On the one hand, of course these kids need limits. As happens every month, I’d recently heard about several teens and college kids who’d overdosed and been rushed to the emergency room; two of them had died. On the other hand, I’ve repeatedly witnessed the torture kids can suffer at the hands of their peer group when their parents step forward and “rat them out” about some planned hazardous activity. Some of these adolescents are ostracized for years, and sink into deep depression.

Even if an adolescent survives this, the parent–child relationship can take a serious hit. Sometimes, a daughter or son never forgives a parent for breaching their confidence. Again and again, I’ve seen how estrangement from one’s own teen or young adult can be one of the most agonizing experiences a parent can endure. I don’t want this family to rupture, yet I know that bad parental decisions can lead to horrific consequences. This is for real, and I feel paralyzed.

As Mary Ann and Craig stand up to leave at the end of the session, something takes hold of me and I say, “Honestly, as I think about what my wife and I would do in your situation to keep our own kids safe, I don’t know how we’d handle it. I really don’t know.”

During the next session, I learn that Mary Ann and Craig had come up with a rough-and-tumble, 21st-century solution to the New Year’s Eve conundrum. They’d actually let 15-year-old Jenny go to the loft party, but with a twist: Mary Ann had, in fact, called up Betsy, the mother of Jenny’s best friend, and had sworn her to secrecy. The three parents had hatched a plan in which Craig would accompany Jenny and her friend to the loft. He waited outside until their revised curfew of 1 a.m. When the girls emerged, he brought them to an after-party they’d organized with family, friends, and neighbors in their home.

A little wimpy maybe, but not bad, I thought. But just as I was about to launch into a lecture about the need to establish clearer family hierarchy, I remembered one of my own 21st-century solutions—a scenario my parents could never have imagined in a million years. Several times, my wife and I had actually gone with our son to indie rock concerts. There he’d stood with his friends, shrieking in the mosh pit way up front, while we silently sat up in the balcony and tried not to cause too much embarrassment. There I was in my sunglasses and hoodie (which hid my industrial-strength earplugs), trying in vain to blend in with the crowd.

Now, as I listen to this family’s recap of New Year’s Eve, I realize something I’d seen building for years—that a cultural sea change had taken place. The Millennial family lives in a new space, with parents struggling to find a balance between the need to exert authority and a profound desire for continuing attachment. Parents want safe limits for their teens and a seamlessly close, uncomplicated relationship with them. They want it all!

Regaining my curiosity, I ask Craig and Mary Ann, “What led you to this, umm, unusual solution?”

“Strangely,” Mary Ann replies, “it was when you admitted that you didn’t know the answer, that you couldn’t handle it any better with your kids. At that moment, you became a real person with us. And when you did that, we knew it was up to us to figure out our own way.”

My head spins. Not only has the culture changed, but these parents are telling me that in the therapy room, I need to do something different from what I’d been doing all these years. Sometimes, parents just needed me to be with them in their confusion and fear.

You never know where small changes will lead. Mary Ann’s leap of faith in calling Betsy led her to start a peer group for parents. Over time, and with my help, it grew into a community-wide partnership between home and school that aimed to create a container strong enough to hold kids more safely. I felt hopeful about this enterprise, glad I’d been able to support their effort.

But the moment I’ll always remember is a smaller one, which took place when Craig, Mary Ann, and Jenny met with me following the New Year’s Eve party. Right after the session, Craig took me aside and said, “Honestly, I thought it was crazy, that whole plan. But on the way back from the loft party, Jenny opened up to me, telling me details about the party and how she felt about stuff.” He fought back tears. “It was the first time I felt needed since she was 12 years old.”

When Craig said that, I felt a click of recognition. Both of us would do anything to keep our kids safe, and yet we’re desperate to maintain their trust. We want the limits and the indie rock concert, the boundaries and the Times Square party. What a hard, messy privilege it is to raise children in the 21st century, and we’re in it together, my parent-clients and I. The more I lead with this truth, the more I can be an effective therapist.

Ron Taffel, PhD, chair of the Institute for Contemporary Psychotherapy, is the author of eight professional and popular books and more than 100 articles on therapy and family life.

This blog is excerpted from "Happy New Year's Eve?" by Ron Taffel. The full version is available in the May/June 2016 issue, Unexpected Gifts: Six Master Therapists Recall Their Most Unforgettable Sessions.

Dear Ron, I LOVE this article. Good for you for your gentle self- mockery and then acknowledgement of your own puzzlement which ironically empowered the parents. I might have burst out laughing at Jenny's stonewalling which would not have been useful. That scene was so classic. She had the makings of a master politician. Minuchin might have commented on that, and I wonder what Whittaker - would have done? I always feel that we are called to authenticity and honesty and to step out of the therapy box when it's necessary. I am real with my clients, offering my therapy wisdom but not out of some false hierarchy. And I did love your article in the Networker. It was really helpful. Thanks for this story. Ellen Fox