An Expert Explains What It Really Takes to Change Behavior 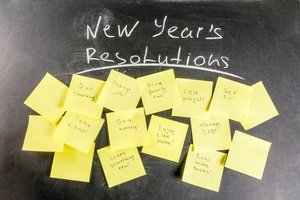 The holiday cookies are all eaten and the last champagne toast has been downed. It’s time for a new year and a new you, right? Surveys suggest that about half of us will make New Year’s resolutions, most of which will have to do with exercising more, eating less, and permanently snuffing out cigarettes. Unfortunately, some old acquaintances aren’t too soon forgotten, and our habits tend to follow us into the New Year, for better or for worse.

“People recognize intuitively how much of their lives are habits,” says Charles Duhigg, a New York Times reporter and author of the bestselling book The Power of Habit. He cites a Duke University study that found that 40 to 45 percent of people’s daily actions are habits or unconscious decisions. For the most part, we should be thankful that our brains have a highly functional autopilot mechanism. There’s enough in life to worry about without having to give our full attention to tying our shoelaces or driving to work. “The problem is when that same automatic tendency takes over something we do care about, like what we’re eating, or how often we’re exercising, or how we spend our money,” notes Duhigg.

For centuries, everyone from Aristotle to Oprah has talked about changing habits, and New Year’s in particular is a time when we focus on new beginnings and fresh starts. For many people, that means trying to ditch some persistent negative behaviors that impact health.

It appears as though healthy living in the New Year should be pretty easy. Other people seem to do it all the time, so surely you can just strap on some running shoes and get to the gym, or ditch the midday snack cakes for a salad and a Powerbar, right? Not so fast. “When you have a neurological pattern established via habits, you can’t simply say, ‘I’m going to stop doing that,’” Duhigg suggests. “You can’t just willpower through, ignoring the cues and the cravings and the reward . . . It doesn’t actually work.”

People should instead pay more attention to analyzing and diagnosing what he calls The Habit Loop. The loop starts with a cue that sparks an urge or craving. The cue can be internal or environmental, such as a particular place, time of day, or emotion. The second part is the routine—the behavior itself—and that routine leads to a reward that satisfies a particular craving. By better understanding the cues and rewards underlying our habits, we can more effectively focus our attention and try out new routines.

For instance, when midday fatigue at your office cues you to get up and get a soda from the vending machine, you might consider whether this caffeinated sugar jolt is really what you’re seeking. Perhaps the real reward is getting away from your eye-numbing computer monitor and moving around for a few minutes. If so, maybe next time you experience the craving, you could start a new routine, like taking a brief walk outside the building or paying a quick visit to some coworkers. Over time, the new behavior will become one small habit that can have a big impact on healthier living. “Simply explaining to someone about cues and rewards and helping them learn to identify those triggers and cravings in their own lives actually helps people change their own habits,” Duhigg says. “Just giving them that knowledge is actually a really useful tool.”

The Power of Habit has quickly become a big hit with readers interested in how their minds work and businesses seeking new tools for success from psychology. Another reason for the book’s success, Duhigg says, is its new perspective on decision-making. We spend most of our energy on a few big, meaningful events that cause big shifts in life, like where to go to school, whom to marry, and what job to take. “Those are big, important decisions,” Duhigg agrees, but we ignore equally important everyday decisions. “It doesn’t matter what we eat for lunch today, but it matters a lot what we eat for lunch every single day.” The Power of Habit capitalizes on a growing interest in “how small, discrete decisions impact us in the same way that big strategic decisions do.”

Don’t worry that Duhigg’s book is a runaway bestseller that’s threatening to put therapists out of the habit-change business. “I think therapists can help a huge amount,” he says. “By committing to a plan with a therapist, by being involved with a therapy group, by making change into a social experience, you increase the likelihood of being successful.”

In fact, the very act of declaring a New Year’s resolution may be good for your health. Even though many of these resolutions ultimately fail, one study by clinical psychologist John Norcross and colleagues found that people who publicly commit to declaring a New Year’s resolution are much more successful at following through on behavior change than others who want to change the same behavior, but don’t officially voice their resolve.

One promising approach to changing the way you make a New Year’s resolution comes from MeYou Health, a website that advocates turning sweepingly broad goals, like quitting smoking, into smaller targets, such as reaching out to a friend or online support group whenever you get a craving. That process of dismantling large goals into small, specific plans, Duhigg says, is essential for changing our most stubborn habits. “You need to figure out a specific plan that’s related to specific events and parts of your day, and then have some small gains and small wins that give you a sense of momentum. And if you can involve a community, a group, or a social experience, it makes it easier.”

This blog is excerpted from "Learning How to Learn," by Jared DeFife. The full version is available in the January/February 2013 issue, Treating the Anxious Client: New Directions for Psychotherapy's Most Common Problem.