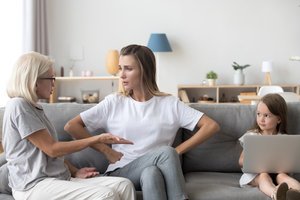 "I don't love her hat," I announce. The item in question is an ersatz safari number in pink and white gingham, and it's on the head of my first grandchild, Hannah, who's 5 months old.

Susan, my daughter-in-law, looks up from the baby clothes she's folding with perfect precision and fixes me with a granite stare.

"If you don't have something nice to say," she says, after what feels like a barrage of poison darts aimed at me from behind her heavy-lashed eyes, "please don't say anything. Please." Then she softens. "That's what I told my mother, too."

Well, at least it isn't just me. I feel slightly less rebuffed.

Ours hasn't been an easy relationship: I'm of the toss-the-laundry-in-rumpled-heaps school of sorting; her style is worthy of opening hour at Bendel's. In conversation, she defaults to smirky silence; I rattle on like a runaway train.

"Sorry, Susan," I murmur, and go back to playing "this little piggy" with Hannah.

To myself I say, "Idiot, you've done it again. Can't you keep your mouth shut?"

Apparently not. When she was first born, I'd admired Hannah's couturier crib, with its eyelet-edged dust ruffle and matching pillow. "How gorgeous," I exclaimed, tearing up a little remembering the bare-bones nursery Larry and I had hastily put together when we'd had David, our first son (and Susan's husband).

Susan smiled at my crib compliment. Larry pressed up against me, proffering a silent "stop sign" that I managed to ignore.

"Isn't it dangerous for a baby to sleep with a pillow?" I asked with apparent innocence. I could feel Larry slump in defeat, anticipating what would come next.

Undeterred, I went on. "I mean, when David was a baby I remember the doctor telling me not even to leave a big stuffed animal in the crib—that it could smother the baby. But I guess things are different now."

The train had run off the track. Susan turned and stalked out of the room. Larry glared at me, furious.

"Again?" he hissed, his look speaking louder than his word. In fact, he, too, had erred in the few years we'd been in-laws. The first time Susan and David invited us to dinner, we were dutifully impressed by the lavish display of crudites and cheese (later Larry commented that it would have served 10 people). The dinner was equally impressive: lamb accompanied by crisp roast potatoes and green beans.

So impressive that Larry said, "Susan, this is absolutely delicious; could I have a little more?"

Susan turned pale and disappeared into the kitchen, returning with a small plate of potatoes and a flurry of apologies. She confessed that she'd ordered the dinner from a gourmet food shop, and she was glad we were enjoying it, but she was so, so sorry, really sorry, that she hadn't ordered more. How could she have been so stupid! Did we want veggies-and-dip or some cheese maybe?

David stared into the middle distance, mortified. I looked at my plate and prayed for deliverance.

Larry cut off Susan's self-flagellation. "No problem, don't be silly. We've had plenty. It's a wonderful dinner."

I wanted to tell her how I'd once passed off store-bought chicken paprikash on my unsuspecting in-laws, but I knew to keep my mouth shut.

Unfortunately, my mouth had sprung back into action as soon as Hannah had been born. Before the hat and after the pillow there was the fever episode.

"She's burning up," lamented Susan one day as Hannah lay on a quilt on the floor, kicking her feet and grinning, making me want to grin back.

I bent down and placed my hand on her head. "She feels cool to me." Blessedly I stopped before saying "You'll learn to gauge these things as you become more experienced." But, alas, I'd said enough.

Susan quickly scooped Hannah up and dashed off to find the thermometer, not bothering to say good-bye. I called out, "Let me know if there's anything I can do," but she didn't answer, and I never found out whether Hannah was feverish or not.

Larry and I had eagerly anticipated becoming grandparents, and we were thrilled with Hannah, but it was clear that we were heading for a grandparenting trainwreck. What to do? I called up an old friend who had four grandchildren and described the situation.

"Bring presents," she said. "Anything little, but nothing sharp and no small parts—soft books, age appropriate. Open a college fund, give money even if you can't afford it. And, oh yes, I forgot the most important thing," my friend said, pausing for emphasis. "Don't talk. Volunteer nothing. I mean nothing. Nada. Just smile and maybe occasionally say something like 'That's nice, dear,' but remember: speak as little as possible and bring presents. Never pass a toy store without going in."

It hasn't been easy—there've been numerous slip-ups—but Larry and I have learned the lesson well. Now he bites his tongue when he watches Hannah eat the third ice cream of the day. I've learned to love safari-style hats (they do, after all, keep the sun off a child's neck). And although we hug and kiss Hannah as much as we can, we never, ever put a hand to her forehead to see if she's feverish. That's her parents' job. We've mastered the grandparents' mantra: "Keep your mouth closed and your purse open."

"Jeanne Mills" is a New York writer and a longtime Networker fan, who's using a pseudonym here for obvious reasons.

This blog is excerpted from "The Grandma Mantra," by Jeanne Mills. The full version is available in the November/December 2008 issue, Now What?: Putting Therapy Skills to Work in Our Post-Election World.