Embracing Grief in a Laundromat 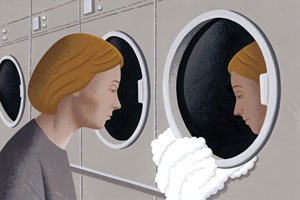 It was 4:00 a.m. and I was the only patron in one of the most broken-down laundromats in the Commonwealth of Virginia. My sister Sarah, after decades of turmoil and tumult, had died the day before—a combination of pain and painkillers.

Earlier in the evening, my family had converged on Sarah’s condo to begin sorting through her things. We siblings were drawn to objects with obvious sentimental value—her teacup collection, her favorite, well-worn denim jacket. For some reason, I was attracted to her bedspread. It was at least five inches thick and had a swirling motif, with moss and pea-green colors conspiring to make the whole thing look even more hideous.

I’d hated Sarah for the first 15 years of my life. Part of that could be explained by the dynamics in large families, at least ours. Among the six kids in our family, our identity was determined by whether we were a “big” or a “little.” As the oldest child and a girl, my role was clearly prescribed: I was the boss, the leader, the junior mother, with all the privileges, praise, and often-resented responsibilities that went with it. Sarah, who came right behind me, always resisted my big-sister status, which I lorded over her whenever I could. Given our opposing personalities, the fact that we were forced to share a bedroom only added further strain to our fractured coexistence as children. The only thing we agreed on was that our mother must have found the dreadful-looking brown brocade spreads we kept draped over our respective antique beds from a garage sale given by a family completely lacking in taste.

Somehow, my sister and I must’ve carried a proclivity for unappealing bed covers into adulthood, because that night, of all the possessions I could’ve claimed, I chose her monstrously bulky comforter to bring home with me. My two brothers had to help me drag it off the bed, roll it up, and try unsuccessfully to stuff it into the trunk of my car. Unconstrained by any trace of sentimental attachment, my husband proclaimed it “too big, too heavy, and too damn ugly.” But finally, to placate my grief, he bypassed the full trunk and managed to wrestle the comforter into the back seat, cursing and hyperventilating the whole time.

Two minutes into the drive, the crumpled-up comforter began to creep over the front seat, onto my husband’s head. His patience exhausted, he pulled over and demanded that I take control of the situation. So I jumped into the back seat, laying my body over the comforter, and we were off again. Not long after, as I started to wheeze uncontrollably, I began to wonder if a bedspread could kill a person. Searching furiously for my inhaler, I remembered my sister’s five beloved cats, who’d shared her bed during the nights and staved off the crushing sorrow of her days. Hearing my raspy breathing, my husband insisted that we kick the comforter to the curb. I refused. So we compromised, abandoning it in the car when we finally got it home.

But as my husband fell into a welcomed sleep, I found myself too wired to do anything but cry so hard my ribs hurt. Looking for a distraction, despite the late hour, I decided to give the spread the big-time cleaning it obviously needed. Although household matters have never been my forte, I knew an everyday detergent wouldn’t be enough. So I concocted a special potion from literally everything under the kitchen sink: dishwashing liquid, lemony furniture polish, ammonia, baking soda, vinegar, copper cleaner—the works. Even though it smelled worse than the comforter, I hoped it would perform some magical alchemy. Next, I searched our house for every quarter I could find, and drove across town to the only laundromat that was open.

With the exception of its name and a sign over the jumbo dryer that read “Use caution with animals and small children,” Spanish was the exclusive language of the 18-Minute Laundry. Virtually no one was inside, but the place sounded deafening. Two TVs, tuned into two different soap operas, competed with each other, both blasting fights between two women and an unfaithful man—all ready to tear each other apart. A talk-radio show blared from somewhere near the back of the room. Piñatas and little girls’ pastel dresses hung from the ceiling. The counter spilled over with lottery tickets and soft drinks for sale.

Using all my strength, I dragged the bedspread to the biggest washer I could find and poured in my potion, the smell of which almost rendered me unconscious. Then I deposited about 100 quarters, turned it on, and hoped for the best. It was a front loader, so I could monitor its progress from a splintery aqua bench that looked as if it had been stolen from a park. Watching the gentle swish-swish rhythm of the spread in the water calmed some of the cacophony inside and around me. But just as I’d started to settle in, I noticed foam slowly seeping out of the machine’s window and door. Soon it began to drip onto the floor. And before long, a full-fledged flood had begun.

Martha Manning, PhD, is a writer, clinical psychologist, and former professor of psychology at George Mason University. She’s the author of Undercurrents: A Life Beneath the Surface and other books. Her work has appeared in numerous publications, including The New York Times Book Review and The Washington Post.