The Courage to Let Go 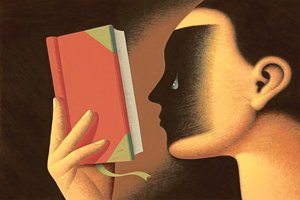 I first meet Peter at The Bookshop, a coffeehouse near my apartment. My dad has just died, suddenly. Peter sits across from me at the big library table, working on his laptop; I’m grading Shakespeare papers. He says hello, asks if I’m a professor, says he is too, and buys me a refill on my coffee. He’s attractive: tall, well-dressed in a casual way, older than I. He laughs at my jokes, asks for my phone number, and calls that night to invite me for a walk on the beach the next evening.

A whirlwind romance erupts. We walk a lot: on the beach, to the movies, to Starbucks near the shore. We talk: he was an English major too, then worked for IBM out of college, breaking the mold of East Coast business geeks by riding his motorcycle to work. He started his own business in Alabama, where he was a successful headhunter in the medical industry. He got an MBA, and is now in the marketing department at State, where I’m in the English department.

One evening as we walk back to his apartment, Peter clears his throat and says, “I need to tell you something.”

“Okay,” I say, moving closer as he takes my hand.

“I’ve been married before,” he says.

“I know,” I say. He’d told me about a too-early marriage to a high school sweetheart who got pregnant. Their daughter became a famous fashion model. He pauses, and I look up at him. His face is taut, and slightly flushed.

“Yeah,” he says. “I’ve been married four times.” I don’t even pause: we walk on as though nothing has happened. “And I have six children.”

We’re moving in cadence; I don’t misstep. “Well,” I say. “Wow.” Peter acts like he’s just told me that the weather forecast is for sun and 75, as it is every day in our beach town.

Another time we’re on the way home from the movies. It’s been a lovely day: a long walk to the theater to see Paul Newman in Nobody’s Fool, dinner at the cheap Mexican restaurant. Peter says, “I have to tell you something serious.” For a moment I think he’s going to tell me he wants to marry me, and I’m excited. I want to marry him. I want to be the woman who makes him happy. I want to have this smart, sophisticated, self-contained man who never gets upset about anything, who manages things and will look after me always.

“When we get inside,” he says, and his tone makes it clear this isn’t going to be a marriage proposal.

Side by side on the couch, Peter takes my hand. “This is hard,” he says. I can feel tears rising in me: the man I love is rattled. Is he going to break up with me? Or tell me he has cancer? As I look steadily at him, he says, “I killed someone.”

As Peter tells the story, I float above the couch, watching myself. I instruct myself to remain calm. You can deal with this. You have to make it okay for him. After all, Peter’s story makes a certain sense. Eventually, I’ll learn it’s not quite the whole story: it’s a polished rendition he’s told many times, including in court. He tells me that he was temporarily disabled by a hip replacement, that he acted in self-defense, that he happened to have a loaded gun, that the man was going to kill him. The whole thing happened years before; he was convicted of second-degree manslaughter; the judge commuted his sentence. His probation ends this year, and then it will all be behind him. When he falls silent, my inner voice continues to urge me to step up to this challenge. I meet his beautiful eyes and nod. “I see. Thank you for telling me.”

“I’ve been wanting to tell you,” he says. “I’ve been so afraid I’d lose you when I told you.” Those eyes are suddenly full of tears, the first and only time I see Peter cry. What could I possibly say? I’m back in my body again, and the words are automatic: “You won’t lose me, Peter. I’m here.” A few weeks later, he asks me to marry him, and I do.

When we’ve been married a few months, Peter says, “I need to tell you something.” My heart sinks. I brace myself and take a deep breath. “Sure, Pete. What’s up?”

He says, “I owe some child support, and now that we’re married, Cynthia is taking me to court to get it.” I’ve met Peter’s youngest daughters, Leslie and Susan, when we all visited his mother last summer. I love them.

“She’s going for about $5,000,” he says, glancing at me. He’d declared bankruptcy when he couldn’t pay the attorney who defended him against the murder charge. He’s had a rocky time.

“I’ll pay the arrears,” I say. “It’s something we ought to do. It’s hard on Cynthia to not have the money.”

“I don’t care about Cynthia,” he says, and I quickly add, “It’s not fair to the girls. We want them to have everything they need.” He doesn’t reply to that. Instead, he says, “I wouldn’t have to pay a couple of months of child support if we had them stay with us this summer.”

I end up paying the arrears, and we arrange for Leslie and Susan to spend the summer with us in southern California. I envision myself as a stepmother, offering wise guidance through the perils of adolescence. I picture Peter and me as Mike and Carol Brady, but with only two kids, not a bunch. We’ll have little adventures, and it’ll be fun.

Leslie is 14, and Susan 12. They’re athletic, beautiful, funny, smart girls. They have gentle Southern accents, and excellent manners. They read books, write poetry, and draw. They’re also interested in boys, clothes, shopping, and makeup. They’re excited when Peter tells them that we’re going camping at the beach south of us, and then out to Mono Lake near Yosemite. “Cool!” Les exclaims. Susan squeals, “We can live in our bikinis!”

Camping at the beach, Peter lets the girls do whatever they like, hardly even checking in with them, but they thrive. They body surf, and join volleyball games with other kids. Leslie reads Jane Eyre, and Sue takes photos of sunsets. I begin to relax, and one morning when Peter swims way out, I decide to follow him. I’m a strong swimmer in a pool, and I figure I can always turn over and float if I get tired. When I’m about halfway out to him, however, I get caught in a riptide. I struggle, fighting the powerful pull. I panic, and begin to flail. Peter! I think. Help me! I’m drowning. I choke on a mouthful of saltwater, and see a lifeguard running into the water toward me.

The lifeguard has Peter’s build: all muscle, long legs, broad chest. He has dark hair, like Peter. He’s wearing Ray Bans, and once he has me in his arms with my head out of the water, he carries me until we can walk the rest of the way in. “Thank you,” I say, “oh, thank you.” When Peter comes into shore a few minutes later, he says, “Was that you the guard came after?” I nod and reach for his arm, but he’s busy brushing sand off his feet, then falls asleep on his towel a few minutes later. .... [continued]

This blog is excerpted from "The Rescue," by Elizabeth Young. The full version is available in the May/June 2018 issue, Men and #MeToo: What Are They Thinking?