A Nightmare No More

Repairing the Parent-Child Bond is a Two-Way Street 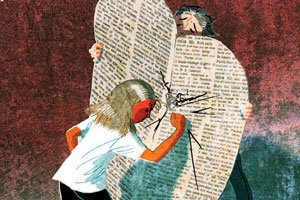 Children at any age can be difficult to parent and nurture for many reasons, especially when trauma has shaped their early life experiences. When difficulties arise between parent and child, most therapists naturally focus treatment on the child. But the parent–child bond is a two-way street, and parents come with their own history, which can impede an already challenging child’s ability to attach. One such mother–daughter case challenged me recently to take a closer look at this two-way street.

Elaine, a single mother living in the Midwest, had adopted Natasha at age nine from a Russian orphanage. Adoption records indicate that Natasha had been found alone in a dirty apartment without food or heat several times before she’d been sent to live at an aunt’s home at age five. Three years later, she’d been removed again because of neglect and sent to an orphanage, where she’d lived until the time of her adoption. During her first year with Elaine in America, Natasha recounted stories about scary men coming in and out of her parents’ apartment and the police arriving many times to break up arguments. But by the second year, she was no longer speaking about her life in Russia.

When I first met with Elaine, she described 13-year-old Natasha’s behavior as a combination of icy disengagement and fiery rage. Her default mode of disengagement seemed almost robotic: she often retreated to her room and answered even the most benign questions in apathetic grunts. One time, when Elaine tried to raise Natasha’s pant leg to check out what seemed like a nasty bruise from being kicked on the soccer field, Natasha pulled her leg away and spat with disgust, “Ew, you’re gross!”

This constant rejection of Elaine was coupled with fits of rage that would erupt without warning about seemingly trivial things. Usually, scenes like this would end with Natasha running to her room and slamming the door so hard it’d shake the rest of the house. If Elaine tried to knock gently and enter, Natasha would snarl, “Get out of here! I hate you!”

Elaine was living in a state of constant stress. Weeping openly, she told me she was deeply ashamed of the way she felt and how she was failing to connect with her own daughter.

“Natasha had a very difficult time in her early years, and it sounds like she built up some pretty tough defenses. You’re doing the best you can,” I assured Elaine. “Life with any girl her age can be difficult, but I think we can find ways to make sure you can build up a foundation of trust and support. Soon enough, you’ll even be able to enjoy spending time together.”

When Natasha first walked into my office with her mother, she struck me as a sad baby stuck inside a teenager’s body. She avoided looking at me, and pretended not to hear my questions or know the answers, even when I asked something simple.

As with most traumatized children I work with, I knew my first task was to transmit to Natasha that she was safe—at least safe enough to peek out from her protective shell and see if there could be something worth taking the risk of letting her guard down for. In these situations, I can often find ways to help parents and children connect through attachment-based games that involve elements of silliness, movement, and surprise.

Want to help your young clients separate "good" worry from "bad worry"? Download this FREE CBT worksheet for kids and adolescents and get started today!

So when Natasha came into the next session looking at the ground and picking the polish from her nails, I surprised her by asking, “Do you have strong arm muscles?” I turned to Elaine and asked, “Is it ok if I check how strong your daughter is?”

Puzzled, Natasha immediately looked at her mom and then at me. She seemed genuinely curious.

Next, I asked her to make a fist with her hand, and when she held up it up, I cupped it with both my hands, looked her squarely in the eyes, and said with a resonant voice, “Oooooh, that’s a good fist.” I then reached for a big sheet of newspaper and spread it open in front of me. “Now, with this fist, I want you to punch a hole right here in the center of my newspaper when I say ‘One, two, three, punch.” I pointed right to the center. “I have my arms extended way out, so you don’t have to worry about hurting me when you punch the paper,” I added.

Natasha nodded cooperatively as she readied herself to respond to the signal. “One, two, three, punch!” I said with vigor. Natasha threw a precise, purposeful fist through the paper, and I simultaneously pulled at each side. The newspaper tore in half cleanly and with a resounding POP! Natasha looked stunned and impressed.

“Wow!” I yelped, mirroring her reaction. Natasha glanced sideways toward her mom, giggling at what she’d done as Elaine beamed with pride. Surprisingly, Natasha leaned toward her mom’s arm for a moment.

Natasha’s laugh was genuine and I could tell that Elaine was both pleased and surprised to hear her daughter’s laughter. “I love to hear you laugh. That’s the best sound in the world!” she said at one point. For the next few sessions, we continued these types of playful games filled with laughter and surprise that got around Natasha’s defenses. Session by session, she became softer and more present. When I’d ask her about school, soccer, friends, even some of the things that made her so angry at home with her mother, I noticed her responding not only to me in this way, but also to Elaine. I was hopeful that these small moments of connection and shared laughter would provide the basis for real therapeutic progress.

When Elaine came in for an individual session, however, I was surprised to hear her say that she couldn’t see any changes in her daughter outside the therapy room. She told me she still experienced dread when approaching Natasha and felt ineffectual and unable to connect at home.

When I described my experience of Natasha opening up to her in our sessions, Elaine said she thought Natasha might just be “faking it.” I was shocked to hear her say that in such a matter of fact way, so devoid of hope. I realized I’d have to do some deeper work with Elaine to understand the meaning she ascribed to her daughter’s behaviors and explore her how her own attachment history might be contributing to their challenges.

“Elaine, I’m wondering: did you ever get to feel this way when you were a child—that your mom or your dad or someone really felt true delight in being with you?” I asked. “Like someone sought you out just because they felt pleasure in your company?”

“I don’t know,” she responded.

I probed further. “For example, can you think of a time when your parents cuddled with you, or held you in a way that made you feel special?”

Elaine paused. “I can’t remember that kind of moment. My parents were really busy, and there were a lot of us kids. They weren’t really the affectionate types. But I remember when I got my first cat,” she recalled. “When he hopped up on the couch next to me and started rubbing his back and tail against my leg, I thought to myself, What did I do to deserve this cat’s affection?”

Elaine seemed to be experiencing a deep sorrow as she relayed this anecdote. So we spent the next few sessions exploring this feeling of not being truly worthy of love, and how it now intersects with the challenge of raising a child who’s often distant and sometimes frightening.

It began to dawn on Elaine that beyond the security of a stable home and a good school, the need she wanted to fulfill for Natasha was one of feeling really special and connected, as she’d wished for herself as a child.

A Nightmare No More

Natasha and Elaine soon began to pick up positive cues from each other in their day-to-day interactions, cues that had previously gone unrecognized. In subsequent sessions, Elaine reported that Natasha had begun seeking her out in ways that were small but immensely heartening. One day, for example, Natasha had emerged from her room and nonchalantly asked Elaine if she’d make her some ramen noodles. Elaine was more than happy to oblige, but asked in amusement, “How come you’re not making them yourself?” to which Natasha responded with a smile, “They taste better when you make them.”

Elaine’s confidence as a mother began to blossom the more she felt that Natasha trusted her and wanted to be with her. And in therapy, Elaine continued to learn to be present and supportive in ways that were more palatable to her daughter.

With their deeper grounding in security and trust, it became increasingly clear to me that Elaine and Natasha could handle the next step of their journey more on their own. I suggested we shift our weekly sessions to monthly check-ins. They looked at each other, and Elaine responded, “This is our special time to just be together and have fun, but I guess we have more of that at home now.” Without breaking eye contact with her mom, Natasha nodded in agreement.

Dafna Lender, LCSW, is a certified trainer and supervisor in both Dyadic Developmental Psychotherapy (DDP) and Theraplay. She’s the program director of The Theraplay Institute in Evanston, IL, and provides Theraplay and DDP trainings and supervision in three languages.

This blog is excerpted from "A Playful Path to Attachment" by Dafna Lender. The full version is available in the September/October 2018 issue, Psychedelics: The Future of Talk Therapy?Illustration © Sally Wern Comport