August Quandary: My Client Keeps Checking His Phone During Sessions

Five Clinicians Give Their Take on This Tricky Clinical Scenario 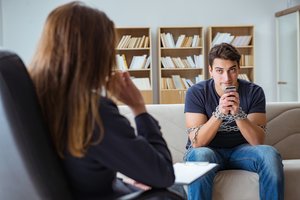 August Quandary: My client Jonathan is in his early 30s. He’d like to be in a long-term relationship but struggles with intimacy, which is why he came to me for help. We have a good rapport and he’s generally engaged in sessions, but if there’s ever the slightest pause, he slyly checks his phone for emails or updates, even though I’ve asked him not to on several occasions. The minute the session ends, his phone is out and he’s scrolling through Twitter. I suspect his phone use may be affecting his “real life” relationships and adding to his anxiety, but when I raise this with him, he insists that it’s not a problem and I’m just out of touch with the times. What should I do?

It’s relatively easy to find articles, podcasts, and videos that explain the effects of devices on relationships. I might share these with Jonathan and use them as a catalyst to explore the possibilities that may exist in his relational dynamics. I'd let him explore and play with the ideas we come up with. Therapy for me is about creating a space where we can consider ideas and possibilities that may be uncomfortable to face head on in real life. I’d maintain a stance of curiosity as we explored what’s behind his attachment to his phone.

Once Jonathan had played with the idea that perhaps his phone usage is impacting his relationships, I’d propose an experiment. First, I’d request that at the start of our sessions, Jonathan place his phone in a drawer in my office and not retrieve it until our time was up. Throughout the session, I’d periodically ask about what Jonathan is feeling and if he believes anything underlies these feelings. I think this experiment would generate plenty for us to talk about regarding his fears about intimacy. I’d be very curious to see how his ability in or inability to connect with me in the absence of his phone mirrors his life outside therapy. I’d also share my own reactions to his presence with the phone and without it, to show how others may feel around him and how having his phone out might impact their ability to connect with him.

It this situation, I might gently bring to attention how Jonathan’s checking his phone is affecting my feelings, thoughts and behaviors. Our hunch about the link between Jonathan’s phone usage and his real-life social anxiety could be accurate. However, we need to investigate this with Jonathan in a non-confrontational way that doesn't cause him to secretly rebel.

I might start by saying something like, “Jonathan, I want to share something that's coming up for me every time I see you use your phone during the session. Can I share that with you?”

Asking for permission from the client gives them autonomy. If Jonathan agreed, then I might follow up by saying something like, “When I see you use your phone during our session, I feel agitated and ignored. Maybe somewhere I feel that what I'm saying and what's happening as part of our therapeutic relationship isn’t important to you. As I share this, what's going on in your mind?”

Another option could be to empower Jonathan by highlighting how he’s managed to be emotionally vulnerable with me in therapy, saying something like, "I feel in some ways that our therapeutic relationship is also emotionally intimate because you are open and vulnerable in the counseling space with me. I think there's a fair amount of trust and faith between us. I wonder if distracting yourself with your phone helps you feel safe by taking a step back when you feel too vulnerable?”

Hopefully, by bringing what's happening in the here-and-now to Jonathan’s attention, I might be able to engage with him better.

Just a note: the therapist working with Jonathan would benefit from asking herself what it is about Jonathan’s phone use that bothers her so much.

3) Explore in a Safe Space

For a client like Jonathan, it may be important to explore the anxiety surrounding real-life connection, especially with regards to intimacy. It sounds like he may be able to engage in conversations on his phone without much trouble. To get to the root of Jonathan’s anxiety in real life, I’d first want to unpack what social media and online relationships mean to him. Next, I’d ask him to compare these relationships to ones in real life. Do they seem more threatening to him? Is he able to portray himself differently online?

I imagine the biggest difficulty in our work would be his defensiveness, but we might get around this by focusing first on what prompts him to turn to his phone during sessions—for instance, pauses or silences. Next, I’d want us to talk about the feelings of relief he gets when he turns to his phone. Focusing on what’s happening in the therapeutic space might allow him to investigate the threat he feels in his real-life connections safely, and engage with the therapist more fully. From there, it might feel safer for us to work together to identify how people outside the therapy room might perceive his phone usage and how it might be affecting his relationships.

I’d want to start with Jonathan by asking him if he’d be open to using mindfulness exercises with me to explore how this habit influences his relationships. What’s going on emotionally and cognitively before, during, and after he checks his phone? Is he checking something important? Was it intentional? Is this behavior aligned with his deepest values, therapy goals, and purpose? Has it facilitated the authentic connection with others he craves? Why or why not? How does Jonathan feeling about himself when he’s using and not using his phone? How does he think other people perceive him when he’s using it?

If he’s open to this mindful exploration, I’ll proceed by looking into how he experiences the digital and real world emotionally. Perhaps the digital world feels safer, albeit less intimate. This step might include some psychoeducation. I’d tell Jonathan that despite our technology-driven times, humans are innately bonding mammals who need regular face-to-face contact to function optimally.

Next, I’ll discuss with John the history of his phone checking. How did it start? And what was the quality of his relationships like before and after it became a habit? This will help us determine whether his difficulty forming deep bonds is the cause, result, or byproduct of compulsive tech use.

Taking a humanistic perspective, I’d also want to tell John how I experience him personally in therapy. I may tell him I experience him as emotionally unavailable, contrary to his longing for connection, and perhaps perpetuating the problem.

There may also be room for a broader discussion about the unprecedented power that technology companies are gaining, incentivizing us to spend increasingly more time on our devices for their own financial gain, and leading to tech addiction and pervasive shame and silence. John is not alone.

It sounds to me like Jonathan is repeating with the therapist the very predicament that brought him to therapy: he experiences attachment-related anxiety which he manages by using distancing or avoidant behaviors. Thinking about him as having a “dismissive-avoidant attachment style,” my therapeutic strategy would be to deliberately activate his attachment system over time by allowing more silence, reducing the structure or agenda of each session, commenting on our work and history together in therapy with “here-and-now” comments, using the word we or our often, and making judicious use of self-disclosure.

I'd also gently but consistently bring Jonathan’s attention to the distancing maneuvers I think he’s using, ultimately linking these behaviors with attachment-related anxiety in the therapeutic relationship and then exploring what he may be afraid will happen if greater intimacy is achieved. While he may continue denying the meaning of his distancing behaviors and dismissing the significance of the therapeutic relationship, perhaps over time he can experience the therapist as a secure base rather than a threat to his selfhood, an important change in his internal working model that he might bring to outside relationships as well.

As a therapist I would not place myself in a situation of social interaction with my client and going to her home would influence the relationship which would impact the therapeutic relationship. This clearly crosses the line of professional boundaries for me. I would explain to the client that the ethics and laws of counseling prohibit duel relationships.

This is a good example of situations we might encounter in a small community. My first thought would be to have a conversation with the client (in session if able before the scheduled barbeque) to share the following intentions and ask the client the following questions: "Were you part of the decision to invite my family to the event, and how do you feel about my being there?" "Your feeling of safety and your confidentiality is of upmost importance to me as your therapist, and so I would like to talk through this with you. Another important issue is keeping personal encounters from intruding on the therapy relationship. There are a number of ways we can decide together to handle this issue and I would like us to find the best one for us both." Then I would invite exploration of options with "what if" questions that consider the potential problems inherent in maintaining a therapy relationship alongside facilitating our sons' friendship. My own comfort level would be determined by the complexity of the case and my own ability to keep social contact with the client from affecting my therapeutic response to the client. Another issue is confidentiality includes not sharing with our spouse who sees us professionally. How do I beg off the invitation and keep an open and accountable relationship with my spouse? I might tell the client, "If you would like us to attend, I can do so this one time, but we will probably need to work on finding you another therapist so we are both free to socialize as families."