When Doing Nothing is Everything

Especially with Kids, Learning to Slow Down Is a Precious Gift 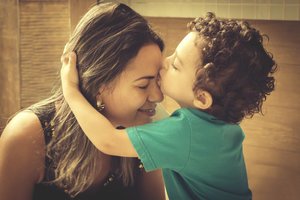 My son got sick over the weekend — vomiting, headache, diarrhea, stomach pains. I thought it was food poisoning. The next day, I got sick, too — the adult version of the kid version. By Monday, I could barely get out of bed and stumble down the stairs to get myself a glass of water. I have a really hard time getting sick. I don’t do surrender well. I’m too busy for illness. I have things to accomplish, clients to attend to, emails I’ve put off answering for months. Overdue time-sensitive projects on back burners. But full-bodied illness has a way of taking precedence over everything else that’s going on in your life in a way nothing else can.

I cancelled my video conferences, client sessions, and phone calls, shut down my computers, and curled up on one end of our couch in a fetal position.

My son told me he was still feeling sick, too. Could he also stay home for the day? He joined me at the opposite end of the couch, nursing a bottle of electrolyte-infused SmartWater. To my bleary eyes, he looked well enough to go to school: energetic, clear-eyed and pink-cheeked, but for once, I didn’t care if he was truly sick or just wanted to skip a day of teacher-directed agendas and Spanish class to stay home with me. At that moment, I probably wouldn’t have cared if he’d liquidated my IRA. My husband blew us air-kisses from the far end of the living room, hoping to avoid contagion.

Jennifer Aniston admitted once in an interview that she was fascinated by skin. “I think about skin a lot,” she told the interviewer. I thought about skin a lot, too, that day, as I lay on the couch resenting my healthy, productive husband for wisely keeping his distance. I don’t give my own skin too much thought, most days, unless I’m scheduling a dermatologist appointment. To me, it’s always been an afterthought, a union between an open and closed parenthesis, the chassis of more precious organs, glands and systems. The pain in my skin seemed to be saying, “Whose parenthetical, now?” as it gave me a visceral experience of its Skindom. I couldn’t help but feel the subcutaneous recesses as aches and chills intensified like the reverb of a guitar held too close to an amplifier. Jennifer Aniston was right. Skin is God. Praise be to Skin.

I’ve been sick before, but I can usually mask my symptoms with over-the-counter medications. Once it feels as if all the moisture has been sucked out of my membranes—or like a russet cloud of ibuprofen has cushioned my aches and pains—I do what every other caffeine-fueled, work-obsessed, task-addicted American does from morning till night: I power through my to-do lists without missing a beat. But that Monday was different. Reduced to a barely consciously human skin-ball of pain, unable to walk, eat, or lift my neck off the pillow, something amazing happened: I let go of my agenda. Poof—just like that.

My son sat on the other side of the couch, staring at me, a smile on his face.

“Hi,” I answered, the sound of my vanishing agenda still echoing in my ears like that subtle “whoosh” that emanates from a mike when you delete an app from your computer.

“Drink, mom,” he said, handing me a SmartWater. “It has electrolytes.”

A day without an agenda: it was a weirdly foreign and wonderful experience.

Here’s what we did: Nothing. And here’s what I learned: nothing is everything.

My son and I cuddled. We played “No Stress Chess” and “Battleship.” We looked at his old baby pictures, including the first picture of him ever taken outside of the womb, which our doula snapped a few seconds after he was born.

“Is dad crying in the picture?” he asked, his eyes wide with awe.

“He sure is,” I responded. “From happiness.”

That made him smile.

We made an Origami butterfly with wings that flapped when you pressed the middle fold. We stared into space—him lost in thoughts of flag-football maneuvers and Rubik’s Cube algorithms with his arm hooked around my arm and his feet scootched under my leg, me lost in thoughts about skin being the biggest organ in and on the body.

“Being sick is fun, mama, don’t you think?” he asked randomly, after reading me a few paragraphs from a Rick Riordan book.

Mama, mommy, mom, ma, and once, jokingly, he called me French Toast. He read me the stats on his favorite football cards, looked up NFL headquarters on my iPhone, and explained how the James Webb Space Telescope has been designed to locate extra-terrestrials in 2020.

But the capstone of our sick-day—which ironically was more of a well-day—was the Relaxation Station. My son is a fort-building expert by trade and he took the liberty of using every pillow, cushion and blanket in the house to construct it.

“Get inside, it’ll help you feel better,” he insisted with the confidence of a medical resident in the last week of his graduate externship.

I climbed into the Relaxation Station, suppressing my groans and keeping agonized facial expressions to a minimum. Then, I lay down and promptly fell asleep. My son was kind enough to let me rest. It wasn’t until much later in the evening, when I scrolled through the day’s text messages on my iPhone, that I saw half a dozen pictures of my face half-buried in cushions, which my son had taken the liberty of sending to his father and a few of my friends and relatives: mama asleep and very pale in the Relaxation Station, surrounded by green-sick-face Emoji’s.

The following day, we both felt better, thank Skin.

"I have a question, mama." He was helping prepare his lunch and snacks for school as I also got ready to leave for work. “Can we take another sick day off soon?”

“You mean when we’re not sick?” I asked.

Before? I would have said, “No, sweetie.” When he asked plaintively, “Why not?” I would have gone into dreaded lecture-mode: adults go to work for important reasons and kids go to school for important reasons, too. We can’t just not do things on a whim. If everyone didn’t do things on a whim, people would vote for the wrong president and society as we know it would collapse into a sordid End-Times chaos of daily government firings, political vitriol, and Reality-TV news scandals with topsy-turvy loyalties to dictators and Russian cybercriminals.

We have to always follow through on our commitments… right?

My son smiled and gave me a hug.

“Note to self,” I thought. “Drop your agenda—often.”

There’s nothing more important than doing nothing for extended periods of time, particularly with your child. But because doing nothing isn’t reinforced with any of the usual social, financial, or professional rewards we get from perpetually doing, it’s easy to overlook nondoing as an important activity—or as an important inactivity. It can take an extreme event—such as being immobilized by illness—to slow us down long enough to take in the preciousness of what’s already here in our lives. That said, you might still want to try your best to avoid falling asleep in the Relaxation Station when your son knows your iPhone passcode.

Alicia Muñoz, LPC, is a certified marriage counselor. She’s a contributor to Counseling Today, GoodTherapy.com, YourTango, PsychCentral, and Medium.com. Her first book, Fight Less, Love More: The 20-Minute Relationship Book for Couples, will be available for preorder in November.

Thich Nhat Hahn said it best: "Don't just do something, Sit There..."