A Special Storytelling Piece from Our Family Matters Department 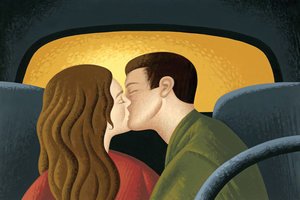 "Here’s what I know,” the Facebook message began, days after I’d asked after her. I braced myself before reading on. It had been 40 years, after all, since our high school days in the lackluster confines of life in Buffalo, New York. But she’d always been the bright spot, the kind of girl I’d dreamed about since the age when dreaming about females had become somewhat of a compulsion.

Perhaps that’s why memories of my time with her, pushed so deeply into the recesses of my memory, still swirl in a mixture of fact and fantasy, especially one evening that continues to linger all these decades later. Even now, it reflects how I saw her and how I wanted to see myself—worthy of someone like her.

She was mature, graceful, poised: an iconic presence among us awkward teens. At a time when the rest of us were struggling with inconsistent growth spurts and grotesque acne outbreaks, she remained a bastion of perfection, impossibly gorgeous, and accessible, at least as a friend. She had an older boyfriend, but mostly spoke of him as some distant and complex figure, often referring to him only by his last name. “Gundy told me I looked fat,” she’d say to me between classes. “Fat?!” I’d balk with appropriate horror. “No way!” Her laugh came easily, and her auburn hair tossed forward as she chuckled.

As burgeoning thespians, we were in some plays together. She was never great at acting, but she could take over a stage with her confidence and grace, and simply own any scene she was in. I don’t recall we ever played opposite one another as love interests, but in retrospect, that’s probably for the best: I don’t think I could’ve handled it. In fact, I can envision the story in the local paper: “Fatal Heart Attack during School Play. Boy leaned in to kiss female lead and dropped to floor immediately, according to eyewitnesses.” Not a dignified exit, to be sure. So we were “just friends,” at least until spring of our senior year.

I’d just completed a two-week run of Carousel, the venerable warhorse musical crafted by Rodgers and Hammerstein. I played Billy, chewing the scenery with gusto during “Soliloquy” and the death scene near the end of the show. I can’t remember if she was in it, but she may have had a minor role. She was always around for theater activities at any rate. We started seeing each other shortly after for two reasons: she’d broken up with Gundy (again) and my confidence had gone from nonexistent to emerging in the wake of the success of the show. Why not quickly parlay that triumph into some benefit? I thought.

So to the shock of all my friends, I asked her out on a date, the most popular, desirable girl in school. I kept it as quiet as possible, but word leaked, as it always does in high school. I begged my older brother to let me borrow his car, a cool white Triumph Roadster, for the appointed evening. Normally, he’d have said no, but even he was aware that I’d clearly out-kicked my coverage with her, and offered his wholehearted support: “One scratch on the car, you’re dead.”

After carefully navigating the streets in my brother’s car, I arrived at her house, which was much bigger than mine and in an opulent section of town. She came to the door wearing a simple sweater and skirt, unassuming and elegant. I held my breath for a moment and gazed at her, noticing in her eyes a slight sadness that had never been evident to me before. Perhaps I should’ve had the presence of mind to ask her about it then, or at least remembered to inquire later, but my anxiety had taken over, overwhelming any capacity I had for insight or observation.

In fact, I have no recollection of how we spent that evening, until I pulled back into her driveway at the end of the night. My memory of that part is clear and crystalized. Sitting awkwardly with the shifter and console between us, I turned toward her. Thankfully, my look must’ve conveyed enough, because I wouldn’t have been able to find any words given my butterfly-infested belly. Leaning in, our lips met, and we kissed warmly and affectionately, if not passionately. It’s a kiss I’ll never forget, as simple and elegant as her, the girl of my dreams—or “woman” rather, as that’s what she was to me, even though we were the same age. After, I walked her to the door with humility and thanks. She kissed me again as we said goodnight.

Read the rest of the story here...

Richard Holloway, PhD, is a professor, associate chair of the Department of Family and Community Medicine, and associate dean for student affairs emeritus at the Medical College of Wisconsin. He maintains a practice as a licensed marriage and family therapist.

This blog is excerpted from the article, "One Enchanted Evening," by Richard Holloway. The full version is available in the July/August 2018 issue, "When Depression Comes Back: Going Beyond the Limits of Therapy."