Five Clinicians Give Their Take on This Tricky Clinical Scenario 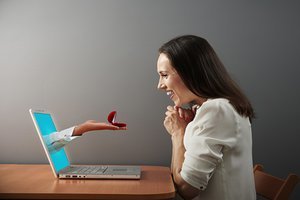 Thank you to everyone who responded to our first-ever Clinician's Quandary. We're excited to launch this resulting inaugural blog, featuring five of the dozens of insightful suggestions we received from readers. Submit to next month's Clinician's Quandary here.

June Quandary: My client Diane just told me she intends to move overseas to marry a man she recently met online, but has never spent time with in person. She’s divorced, and has said on multiple occasions that she hasn’t healed completely from the split. This raises an alarm for me, but I don’t think she'd respond well to my being overly directive. How should I proceed?

I agree that being directive is to be avoided in this case. To start, I'd normalize the difficulty of this decision-making process for Diane. When we have to make difficult decisions, our different inner parts talk with each other. I’d encourage Diane to tell me about these parts in our therapy. Next, I’d ask these parts questions about how they helped Diane make this decision, especially if none of them were skeptical about her plan. I’d emphasize that in the end, this is Diane’s choice to make, but therapy can help her explore herself so that she’s fully aware of her decision-making processes and has heard from all sides of her own mind. Helping Diane articulate how she arrived at her decision and might respond to any concerned parts that haven't been heard would be a big part of our therapy. Is there a part of her that she considers a best friend? What would that part say, and why? If she encounters problems after moving, how might she deal with them? And how likely are those problems to occur? These are important questions I’d want to cover with Diane in treatment.

If I was treating Diane, I’d suggest she take a trip with this man to “test drive” the relationship before committing to marriage. It seems there are many factors clouding her judgment. I’d examine any history of impulsiveness and poor judgment and inform Diane of the risks of getting married this way. However, I’d also want to be an ally to Diane, acknowledging that fulfilling relationships are certainly an ingredient for happiness. But I’d still want to discuss what could go wrong if she choose to move overseas to marry this man. Has she acknowledged that he might not be interested in her once they finally meet? I’d also want to discuss the nuances of spending time together in real life versus digital communication. Ensuring our clients’ safety and looking out for their best interest is the clinician’s mandate. We're also inclined to examine and highlight our clients’ driving behavior and inform them when we notice cycles of behavior. Ultimately, what Diane decides to do is her choice. But the therapist can also help her explore other ways of finding a fulfilling relationship.

3) Don't Shy Away from Empathic Confrontation

How I’d respond to Diane’s decision depends in part on how long I’d have to work with her before she moves abroad. If she’s moving within a couple of weeks, I think a direct confrontation would be the way to go, although I’d frame this as my own discomfort with the situation and concern for Diane in a deeply empathetic way. I might say something like, “Wow, this is a huge move on your part. I have some concern that you may be being impulsive about a life commitment! Do you have any doubts about this move?” Perhaps this would invite Diane to voice her own hidden doubts. I might also ask Diane to take a step back and look at her situation by asking how she’d react a good friend or family member was making this decision.

If I had more time to work with Diane, I’d advise that she go somewhere in nature—maybe a mountaintop, into a forest, or by the ocean—and wait for an inner voice to tell her something very important. I’d then ask Diane to report back to me about what happened during this outing and how it might inform her next steps. Maybe we’d find a repressed part of Diane that has doubts about this impulsive move. By suggesting this, I’d be respecting Diane’s ability to think things out rationally. It would also be important for any therapist working with Diane around this issue to remain calm and centered. Diane will do what she will do, but by creating a space for Diane to think through what she’s getting into is important.

4) Look for Cause and Effect

My approach to Diane’s situation combines elements of several different theoretical perspectives, including grief counseling, attachment theory, and cognitive behavioral therapy. I'd start by asking if she’s found any meaning in her recently ended marriage. By suggesting that she may still be mourning the end of this relationship, I’d urge her to consider how the relationship’s demise might be informing her vision for her future. Leading her through this process of reflection and contemplation about how she makes decisions would hopefully allow her to be better able to see the implications of her plans to move overseas and get married to a man she’s never met in person. This process also provides a coherent focus, helping Diane stay mindful as she approaches the critical task of moving forward after her divorce.

5) Use Lines of Questioning to Support Reflection

I agree that an overly directive approach would probably not work with Diane. Instead, I’d want to use a motivational approach and assess how committed she is to this course of action. Does she have any ambivalence about this decision? Can she tell me more about this man and their relationship? Has he ever asked for money, and has she given him any? What does she know about him? Can anything he says about himself be verified? Why can’t this man meet Diane instead of her going to him? What things does he say that make her want to marry him? Do her friends or family members know about her plans? And if they do, are they supportive or concerned? I believe my goal isn’t to oppose Diane’s plans, but simply to help her become more reflective about her choice and whether she’s ignoring any possible red flags. I’d also want to assess what she learned from her first marriage. Were there were any red flags in her previous marriage that she missed? If so, does she believe she could be missing red flags this time around too?

I would first check the counter transference; are you more uncomfortable than you need to be. Also it depends in what context is client trying to refer to you as an example, what is he trying to explain by asking whether it would be appropriate to hold your hand? Maybe that way he is trying to fish for your personal beliefs and opinions. If s, you can address it that way - it is not about me and my opinions, I would rather like to hear and help you formulate your opinions, decisions...etc Sara Pesic, LPC,NCC

I might respond with normalizing transference, and then redefine what the therapeutic boundaries are. My fantasized discussion: Therapist: "I'm glad you feel sufficient trust to discuss your building relationship skills against the background of our relationship. Since the therapeutic relationship sometimes becomes intense and discussions can become intimate, it is not uncommon for a transference to occur.....are you aware of what transference is?" Client" "No, do I want to know?" T: "Sure, because it's pretty common and normal. It's when a client might "transfer" feelings onto the therapist...almost like practicing or trying out new skills in a safe place. It also occurs if the therapist might remind you of another relationship in your past and you respond to the therapist in the way you responded in the previous relationship. Transference is an important concept because it leads to insights and self-awareness and it's okay to talk about. C: "So it's when I think of you and me in the hypothetical situation?" T: "Could be. So then let's go over what our relationship boundaries are....how do you see our relationship?" (How this conversation proceeds would determine how strongly the emphasis on boundaries need to be.) T: "So bottom line is that if you want to hypothesize about relationship skills, it probably is best to not use me as part of the hypothesis. It would be much more realistic and useful to you to think about a real or possible potential relationship."

I like Michael Bronner's idea of a 'test drive' before Diane makes any decisions. I also like Donald Zappone's questions he would put to Diane. Her inclination has the potential for disaster.

I love this new feature. It is such a pleasure to read the thoughtful and varied responses from different clinicians. The field as it is structured today does not allow enough of this type of exchange.