Sometimes, Too Much Investment in a Client's Recovery Keeps Everyone Stuck 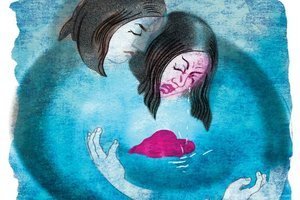 We all know that some clients affect us deeply and personally, but after having been a therapist for more than 25 years, I still find myself being blindsided by certain clients in ways that both humble and mystify me. I’ve learned that if I’m going to be helpful to these clients, I usually have to work through something difficult in myself. I’ve also learned that there aren’t any shortcuts to this process.

Christina was one such client. I’d treated her 16 years before, when she was a graduate student who was working too little, drinking too much, and sleeping with too many men. After two years of weekly therapy, she finished her PhD, adopted healthier habits, and met the man she’d eventually marry. When she called me years later, she told me that she loved her job, had been happily married to Ben for more than a decade, and had two young kids with him. Then she paused and added, “I’m having some trouble, but I’d rather explain it in person.”

Sitting down in my office, and gathering her breath, she said. “I guess I want to start by describing what happened.” She told me that two months before, when her husband and daughter had been away visiting his parents, her five-year-old son, Ethan, had woken up one day with a high fever and seemed incoherent. When she’d called the doctor’s office, they told her to bring him in right away.

“I was heading down the hill from our house on the way to the doctor, totally distracted, and I drove over a garbage-can top that had blown into the street,” she recounted. “For some reason, it freaked me out so much that I stopped the car. My neighbor Michael came out of his garage, picked up the top, and gave me a big, warm smile. I felt shocked at how beautiful his smile suddenly seemed to me. I remember the words bright spot going through my mind. Looking into his eyes felt like some weird kind of other-worldly moment.”

After several doctors’ consultations, Ethan’s full recovery was assured. But she kept returning to that “otherworldly” moment with the neighbor. During the hushed, long days when her son slept, she wandered around the house, unable to focus, replaying the memory of Michael and his smile.

“At first it felt like a harmless vacation in my mind. I’d think about Michael, and it’d feel comforting and exciting at the same time. But then, when Ethan got better and went back to school, I kept feeling this way. A few weeks later, when I ran into Michael at the supermarket, I started shaking. The day was pretty much shot. I felt like I was going crazy,” Christina wept.

“Do you feel depressed?” I asked. It was something she’d struggled with during adolescence.

“I cry a lot, but I don’t feel depressed,” she said. “I feel anxious when I see Michael, but I don’t walk around anxious all day. Sometimes it’s like my body is being turned inside out by all this intensity, like I want to crawl out of my skin. And then I start feeling that I’ll die unless I can do something. I’m obviously here because I needed to tell someone.”

In the days after our session, I pondered the rawness of her feelings and tried to notice what arose in my mind. Why now? I wondered. Why so intensely? Was she revisiting early emotional wounds? Was this 44-year-old woman being preyed on by a welter of confusing endocrine events? Was she, as she entered middle age, trying to recapture a younger version of herself, for whom new love was still in her future? Was there something amiss in her marriage that she wasn’t yet able to see or admit?

We agreed to meet twice weekly for a time. I offered emotional support while we tried to figure out what was going on, and probed for factors that might’ve contributed to her abrupt romantic obsession. As a clinician, I’ve seen my share of affairs, but Christina’s experience was different. She’d been pitched into an involuntary infatuation in the context of a good marital relationship. The episode was unexpected, and unwanted, which was why she felt so unhinged by it.

At each session, I listened as she described her sense of unbearable longing, and at each session she cried. We turned our efforts to trying to understand the underlying psychodynamic factors that might explain her state, and came to believe that her fear, triggered by Ethan’s health scare in conjunction with her husband’s absence at the time, had lowered her normal defenses. Her mind had played the trick of dramatically intensifying the saving grace of Michael’s smile, and like a traumatic memory trace, it was seared into her psyche.

While our exploration helped Christina contain her feelings, after several months of treatment, the problem hadn’t dissipated. She blurted to me one day, “I have this image of Michael confiding his marital troubles to me, and I can’t get it out of my mind.” I saw, yet again, the unnerving intrusiveness of her thoughts, the way they broke through her normal consciousness, and the effort it took to fight them.

I felt a thud of recognition. Christina was preoccupied with Michael—and I was preoccupied with her. It was hard for me to pack away our therapy relationship between sessions. I’d find myself writing detailed process notes after each one, in an effort to get a handle on what was going on, in her and me. Of course, I knew intellectually that my ability to inhabit her experience was part of what made me an empathetic therapist, but there’s always a delicate balancing act of getting involved but not too involved. I’d tipped over the edge.

I talked to my husband, also a therapist, and to my longstanding consultation group. They all knew me, both my vulnerabilities and my strengths. They didn’t judge; after all, we’d all “been there” with certain clients in our own ways. They offered ideas, such as exploring Christina’s experience in terms of the principles of addiction, and whether my sense of pressure to help “fix” her lovesick state was getting in the way. But mostly they helped me see that at times, my boundaries could feel too fluid.

Putting It to Rest

One day, Christina said, “It would be such a relief to acknowledge with Michael what we’ve ‘been through’ together. Hearing myself say that, though, I know how crazy it must sound. We haven’t been through anything together.”

“I want so much to help you with this,” I responded, “but I don’t know how. I wish I understood better. But I don’t.” I hadn’t intended to say that. It erupted from some combination of pain and powerlessness. My throat felt tight and tears pricked my eyes. Christina’s eyes looked wet but very clear. In that moment, looking at each other, I felt that we were together in a different way. We were counselor and client, but also two real people trying our best to find our way, and neither knowing what to do.

For the first time since I started treating Christina, I surrendered to being lost. I felt myself pressing up against a feeling of having to let something go. As I stayed with the feeling, it was as if I was following it in a dark tunnel, and was surprised by an aching grief. I stayed with that too. I wasn’t scrutinizing or reflecting. Rather, I was noticing and bearing witness.

I began to wonder if we’d been distracted by the notion that she yearned for a person. Perhaps the problem wasn’t attachment to Michael, but to the yearning itself. How might she relinquish its tortured intensity and choose to let it go? Strange as it seemed, I began to realize that she’d have to grieve its loss.

In our sessions that followed, I felt my own emotional position toward Christina subtly shift. I was less caught up in the details of her thoughts and feelings as potential clues to her problem. My attention centered on the magnetizing power of her yearning, and the emotional effort involved in detaching from it. My interventions shifted accordingly. Instead of asking how she’d coped in the past week, I’d comment, “It’s painful to be in this state, and it’s also painful to imagine putting it to rest.”

One day, Christina came into our session and said, “I think I’ve finally stopped believing in this feeling. I think I’m letting it go.” I remember that I felt the urge to cry. The image that came to my mind was that we’d been in a storm together, and we’d managed to swim ashore from the wrecked boat.

My bearing witness to Christina’s confusion and shame with interest and calm helped transform the storm inside her into something more tolerable. My role was to accept and contain her unbearable feelings by keeping my own mind when she felt she was losing hers. It wasn’t easy. At times, it took all my fortitude. I needed help from others, and I needed to struggle within myself. Indeed, I believe that my internal work of experiencing her dilemma and facing the pain of relinquishment repositioned me in a way that emotionally shifted something in her.

Christina soon began to come out of it. Her mood gradually became more even-keeled. Drawing on discussions we’d had over the months, Christina had told her husband of the difficulties she’d been through. They had many painful conversations, and she was surprised and moved by her husband’s efforts to understand. It helped enormously, of course, that she’d never acted on her feelings. Our meetings slowed, then stopped. When I saw her once more in the autumn, she seemed, despite a fresh crop of trials, to have reached the other side.

I was genuinely glad for her. Smiling, I could feel us gently letting go of one another. We were both silent for some time. “It’s like you’ve seen me naked,” she said. “Now—finally—I’ve got my clothes on.”

This blog is excerpted from "Taken Over: Breaking the Spell of Obsession," by Daphne de Marneffe. The full version is available in the May/June 2018 issue, Men and #MeToo: What Are They Thinking?

Read more FREE articles like this on Challenging Clients & Treatment Populations and Grief.

This article interested me in that I also once had an obsessive infatuation with my Osteopath many years ago. I spoke to my husband about those feelings and felt a bit sheepish about them but I acknowledged they existed. For some months I was plagued by them and I realized that they had come about because I had been in such incredible pain from my spine when I saw him, and that he was the source of relief and comfort. I thought that the source of my involuntary infatuation may have originated from some deeply biological response that may be akin to the Stockholm Syndrome in terms of the need for comfort and the imprinting impulse in the event of extreme stress.