Fraught Parent-Child Relationships Can be an Opportunity for Personal Growth 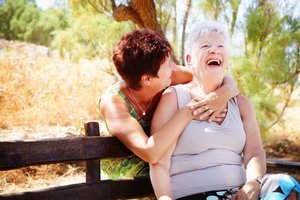 Many of us—including therapists—still hold on to some small sense of grievance about old wounds, even after we've succeeded at achieving a degree of psychological adjustment or emotional health. When it comes to our parents—and what they've allegedly "done" to us—we may have forgiven them, learned to accept them the way they are, and acquired the skill of maintaining a relationship with them that works reasonably well, but still hold in reserve some hard, inner core of resentment. Now and then, however, we're lucky enough to meet someone who doesn't want to settle for this arrangement, who feels driven to let go of the old emotional baggage and find the kind of freedom and inner integrity that comes with being able to love wholeheartedly, without inner reservation.

Donna was such a client. At 46, a well-respected therapist and author, she called to say she wanted some sessions to help improve her painful relationship with her mother, Bernice, 72, an intense and opinionated widow, who, according to Donna, was "a real piece of work."

A week earlier, Bernice had called Donna on her cell phone in the middle of a couples-counseling session. Donna said, "Normally when I'm in session I wouldn't answer the phone, but my mom pushed the emergency 9-1-1 code that she knows would make me think it was a crisis call from my 10-year-old son. So I picked up and was surprised to hear my mother's voice, telling me that I'm the most selfish and uncaring daughter in the world."

Apparently, Donna had forgotten to call her mother the previous weekend, when it was the anniversary of Bernice's marriage to Donna's father. According to Donna, "My dad put up with my mom's demands and mood swings for 37 years before he died, of a heart attack, 12 years ago. Even though their marriage was a battlefield, ever since he died, my mom's decided their wedding anniversary must be treated as a sacred and solemn date."

Trying not to reveal too much to the therapy clients sitting a few feet away from her, Donna had said quickly into the cell phone, "Mom, I love you and I'll call you back in 45 minutes."

When the couples session ended and Donna called her mother back, she was able to be a supportive listener and hear how hard the anniversary date had been for Bernice. Then as soon as she got off the phone, Donna arranged for a new cell phone code for her son, a code that they weren't going to let Grandma know about. Ever.

Sitting across from Donna in my office, I was impressed at how much work she'd already done on her issues regarding her mother. Like many therapists, Donna already knew far more than most people about what makes a fragile person like Bernice act demanding and manipulative. From previous counseling experiences, Donna had mastered the art of drawing boundaries, having her own life, and still being a supportive daughter for an explosive and highly critical mother. As she explained to me, "I've gotten better over the years at being resilient when my mother unloads her frustrations and at reframing the hurtful things my mother's said to me in anger. I still love my mother, even though it's not easy to like her or spend much time around her."

Near the middle of our second counseling session, I asked Donna, "Since you seem to have a good approach for dealing with your mom, I'm curious about what made you call and come into counseling. If you could have exactly what you want from these sessions, what would that be?"

She got tears in her eyes as she said, "I want to stop feeling weighted down or burdened by the fact that I've got a mom who simply cannot see anyone's needs but her own. I want to stop feeling put upon by my reality of being her daughter. I know it sounds like a crazy idea, but I wish somehow I could just embrace this whole mother-daughter relationship thing that I've been sorting out for all these years. I wish I could finally stop needing it to be different and just put my arms around it and say, 'This is the real deal.' I want to feel fully alive already, and not like I'm victimized by this heavy issue called Mom."

The Healing Power of Meaning

A few days later when Donna arrived for her next session. I told her that her description of "embracing the reality" about her mom had inspired me to question my own stagnation in my dealings with my father and stepmother. Donna's face lit up with recognition, wiping away any doubt I had about my self-disclosure. I suggested Donna think about a few questions: "Is there some personal meaning or deep purpose that might be taking place when you have a phone call or visit with your mother? Is there something about your interactions with your mother that's given you a strong push toward your own personal growth and development as a human being? Is there something about your mom's irritating behaviors that's been a crucial stimulus to your becoming the remarkable person you are now?"

Donna thought for a moment and then began to laugh. She said, "I can't believe it's so obvious all of a sudden. If I were to look at my life and ask what's the one thing that's forced me to become a better parent, a better therapist, a better spouse, and a better person, it's been the constant concern of not wanting to be like my mother. My dear mother and her extreme lack of empathy have forced me to learn about compassion, perseverance, teamwork, mutual respect, and fairness. It sounds totally absurd to say this, but I owe so much to my mom. She's the irritating sand in the oyster that's forced me to seek to become a pearl. I still have more to learn, of course, and I guess each phone call and visit with her will give me more chances to see how far I still need to grow."

A Sense of Renewed Energy

That afternoon, I called my dad and stepmother. I wanted to do in my own life what I'd seen Donna accomplish so beautifully. At first, it was difficult. My father kept interrupting me and turning everything I said into a story about himself. At that moment, I realized I could either go back to the old ways of feeling put upon, or try the new way of finding meaning in each interaction. I couldn't change my dad, but I could choose to feel compassion, decency, and relaxation.

I took a deep breath and began to participate fully in conversation about what was going well and what was difficult for my father and stepmother that week. Then, for a few moments, they listened to what was going on in my life. For the first time in years, we were simply hanging out on the phone and connecting like old friends. It felt wonderful.

During our final session, a few weeks later, Donna told me, "Something's changed in the way I feel inside. And I move more gracefully through my life now. The heaviness and the burden have finally lifted. I no longer resent each phone call or visit from my mom, because I now expect there will be a few nice moments of connection along with the curve balls she'll toss me, which keep things interesting."

Donna leaned forward in her chair. "It's like my soul has come into this life to receive a huge number of lessons and opportunities for growth as a result of being around my mother's fragile, wounded soul. Sometimes when I'm sitting next to my mom and listening to her complain about something, I actually feel a sense of amazement and satisfaction that having her in my life has allowed me to pursue a conscious and caring path. I don't know what might have happened if she'd been different."

This blog is excerpted from, "Beyond Acceptance," by Leonard Felder. The full version is available in the March/April 2004 issue, "The Secret Lives of Clients: The Inside Story of What Really Happens in Therapy."