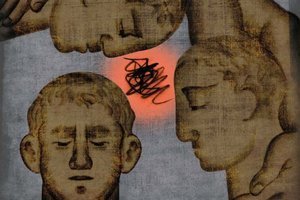 Although I’m a gay male therapist who’s worked with gay clients for 30 years, I don’t purport to know everything there is to know about sex among gay men any more than a straight therapist knows everything about heterosexual sex. But I do have a certain level of professional experience around a particular area of interest among my friends and colleagues—open relationships, or arrangements in which both partners agree to allow each other to have sex with people outside the primary relationship.

For gay men, open relationships aren’t unusual, but the arrangements vary. Some couples agree only to three-ways with both partners present. Other couples agree they can have sex with other people without the partner being present. Some agree to only a one-time hookup with another person, and others allow repeated hookups. But just because something is common doesn’t mean it’s right for everyone.

When a couple in a troubled relationship considers opening up the relationship as a way to fix their problems, an alarm sounds for me, and I often discourage them from doing so. But even for healthy couples, opening up a relationship in a way that’s not destructive is hard work and requires a great deal of communication around what is and isn’t acceptable. Thus, I invite my clients interested in taking this leap to take part in a contractual negotiation in which they agree to make the primary relationship the priority. They talk out the terms and limitations of the open relationship, attempt to ascertain if the relationship is solid enough to be opened up, consent to safer sex guidelines outside the relationship, think about what to share and what to keep private, and agree to try the arrangement for a specified period of time and then revisit it.

Yet even with these guidelines established, helping couples navigate this territory is a challenge. Often, this new freedom brings unexpected jealousy, communication problems, resentment, and the fear that one partner may fall in love, especially when the excitement of a onetime sexual encounter may be off the charts when compared to the familiar intimacy of a long-term relationship.

Then there’s the therapist’s own feelings in all of this. Not every therapist is willing to consider the option of an open relationship with clients; while some therapists, at the other end of the spectrum, follow theories that support open relationships, no matter what the specific circumstances are. Most of the therapists I know fall somewhere in the middle. They want to be supportive and realistic—and they have a lot of uncertainty when it comes to open relationships. In fact, you, the reader, might be noting how the topic makes you feel as you read about open relationships. A little tense? Anxious?

Here’s what I’ve concluded after several decades of doing this work: rather than me, it’s the couple sitting before me who must decide what’s right or wrong for them. But as therapists, we can help couples explore the landscape.

For John and Barry, a committed couple whose relationship was centered on mutual respect and care, opening up their relationship was a process of learning to be open on many different levels—for them and for me.

I’d been working with Barry in individual therapy for just over a year while his partner, John, with whom he’d been living for 12 years, had been seeing a separate therapist. Barry, in his late 40s, had a high-level job in the medical sales industry, but often struggled with issues around self-esteem and self-consciousness. One day, after 45 minutes of talking about work issues, he hit me with a classic case of doorknob therapy: “There’s one more thing I want to tell you,” he said as the session was ending. “John and I have had a change in our monogamy status.”

The decision to open up their relationship came as a complete surprise to me. We’d never even discussed it as a possibility, and I could see that Barry was nervous telling me about it, especially since it was after the fact. With his eyes dropped to the floor and his shoulders rounded, it almost seemed as if he was waiting for me to scold him. Knowing that, like many gay men his age, he carried some deep childhood wounds having to do with disappointing his disapproving father, I wasn’t about to chide him for this decision. Instead, I wanted to listen for the undercurrents that had driven it. I wanted to explore what he and John were really seeking in taking this route so I could encourage thoughtful action and active insight as they moved forward. But we were at the end of our time, so I put him at ease by laughing and said, “There’s so much to discuss here, let’s lead with this next week, shall we?”

The following week, Barry began with the story of how they’d reached their decision. “We were at a bar, flirting with a guy,” he told me, “and the guy suggested that we all hook up together. John and I declined, but on the way home we started talking about how easy and comfortable we both felt with him.” Usually buttoned-up, today Barry seemed excited as he spoke. “The next day, we downloaded Scruff together, a hookup app for gay men, and held hands while we went through the profiles. We both decided on this one guy and met with up him that night. We just chatted, all three of us, got to know each other a little, and then decided to have sex. It was easy and fun.”

“How did it go for each of you?” I asked. “Were you both comfortable? Will you do this again? Do you want to have a third all the time, or will you have sex on your own with other guys?” I asked these questions deliberately and slowly, so Barry could really hear them and understand that I was honestly interested and that my desire was to support him in this exploration. After all, I knew this man, and I knew that the decision to open his relationship with his partner was an indication of interest in growth and development, even if I felt surprised to hear about it so suddenly.

It turns out that Barry and John had already been working on establishing some ground rules: three-ways only, sharing a profile on Scruff that clearly specifies that they’re a couple looking for a third, and hooking up with a guy only when they both were in agreement. I could feel some of the effect of the work Barry had done in therapy, and was proud of the way he communicated these decisions to me with confidence, as well as the thoughtful way he and John seemed to be working it out between them.

In turn, it was simple for me to share my observations about open arrangements in general. “A lot of couples enjoy the excitement early on,” I offered, “but it can lead to difficulties. Usually I ask folks going down this path to do what you and John seem to have done: consider keeping their relationship primary, be really honest with yourselves about what you’re comfortable and not comfortable with, and set guidelines based on this. For you, this means only engaging in three-ways together. Also, it’s important that you agree that hooking up is for fun, as opposed to something that’s used as a weapon if there’s conflict between the two of you.”

Looking back, I learned something about the sometimes hidden and unexpected possibilities of moving to an open relationship. Barry and John were ultimately able to forge a stronger and more open relationship—with each other. They were able to risk sharing their fears and hopes, no longer so worried that the relationship was too fragile—or that they were—to withstand honesty. Therapy was a gentle guide for Barry, keeping him on course and letting him know he’d have a place to return to.

Even in our highly sexualized society, alternative arrangements such as open relationships may seem alien and intimidating to many people, but as therapists, our challenge is to be less prudish and frightened by potentially negative outcomes. Often, what’s risky about an open relationship is risky about any relationship: the potential for lying, hiding, betrayal, disrespect. Thus, my focus is on those issues and the emotional context in which decisions are made.

This blog is excerpted from "The Challenge of Open Relationships," by Rick Miller. The full version is available in the July/August 2015 issue, Should This Marriage Be Saved?: Therapists and the Dilemma of Divorce.

Read more FREE articles like this on Couples and Sexuality.