Six Ways to Find Comedy in Even the Darkest Moments

Shaking Your Clients Loose from Their Tragic Stances 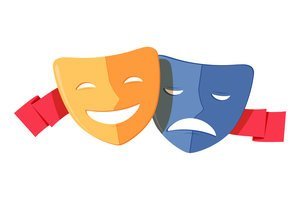 A young man named Jeff, who was dying from cancer that had metastasized to his lungs, was a patient of mine 30 years ago. His family cried and prayed over him and pretended he would recover, though they knew he knew better. I was initially called in to relieve Jeff's pain through hypnosis. That worked fine, but he was still lying in bed out of breath, bored, angry and resentful of the fact that his life was being cut short. He demanded to know why God was punishing him in this way.

As Jeff and I talked about how he could use his last few weeks, the idea came up of reading a great novel about life. Jeff had been an athlete with little patience for school and he had never read a book. He chose War and Peace, the longest novel we could find, and dedicated himself to reading it, determined that he would live until he had finished it. He was a slow reader, and he lived weeks longer than anyone thought possible. He refused all pain medicine that might cloud his brain, and each day we discussed what he had read and learned about life.

Jeff's favorite scene was the one of Nicholas unhorsed and knocked out on the battlefield, coming to and noticing the cloud formations and then the cloud of dust on the horizon. As he realizes that the dust was being kicked up by French soldiers on horseback coming to kill him, Nicholas wondered, "Why would anyone want to kill me, me whom everyone has always so loved?" The wonderful absurdity of Nicholas's sunny self-satisfaction in the face of death connected Jeff to all the rest of us who will one day meet our fate. Whether we deserve it or not, whether we embrace the world or shrink from it, whether we burst with self-esteem or shrivel with self-loathing, we're all going to die.

When Jeff died peacefully the night he finished the book, he no longer felt singled out by a cruel or capricious god. Instead, he knew he was sharing the human condition, a different part of the human condition than he expected to experience at his age, but nonetheless part of what is universal for humankind.

Recently, I was reminded of Jeff when Al, who, like Jeff, was barely out of his teens, was referred to me by a rehabilitation center after a grisly encounter with some heavy industrial equipment at work, which cost him both legs and one of his arms. The rehab center, puzzled by Al's reaction to his accident, wanted me to see him because he was not depressed.

When Al and his wife Alice came by to thank me for my willingness to see them, they assured me that they were getting along quite nicely. Al insisted that he had felt depressed when he first woke up and found that so much of him was gone, but within a few days he realized that even the simplest of activities was a challenge and he was daily given opportunities to use his ingenuity and develop new skills. He realized he was lucky that he had been left with one arm so he could do things for himself and one knee so he had hopes of getting around on artificial legs. When he went to shopping centers everyone was nice to him and he had lots of things to talk about.

Alice, who was very shy, had hated working but hated being home alone even more. Now Al was with her all the time. They didn't have to go to work, and they practically owned the company whose machinery had chewed up Al. Alice winkingly confided that sex had gotten much better too, because Al had been a restless, hyperactive person before the accident, and "now with fewer body parts, he can focus better."

Al and Alice are being offered more help than they can fit into their busy schedule. They are enjoying the challenges of a drastically changed life, and they don't think they need therapy. I'd love to be part of their lives, but I think they have already done for themselves the most important thing therapy could do for them: convert life's tragedies into just another part of the human comedy. Maybe the challenge for Al and Alice will wear thin, and then they may need me, but for now, at least, they know something most of my patients don't know, something I'm constantly at risk of forgetting.

The trappings of individual psychotherapy, whatever the underlying philosophy, have tended to picture the patient as a victim of powerful internal and external forces, living at the mercy of overwhelming emotions and ancient traumas over which he or she has no control. Such therapy could all too easily produce dependency, distrust of the significance of the here and now, distance from life's real relationships, and an overriding sense of disempowered helplessness. Individual psychotherapy doesn't always do so, of course, but it can all too easily enhance the client's sense of tragedy. The therapist has to actively work against such an undertow toward victimhood and isolation.

Family therapy is inherently able to offer a more comic perspective. Several points of view are heard, emotions are countered by reality, and no one is left isolated in a tragic position. Family therapy strips away those tragic and crippling beliefs that perfection is expected, that emotions are irresistible, that other family members are evil, that no one else goes through the same things, that you're all alone and you can't help "it," whatever "it" is. In family therapy, the emotional corners into which people have painted themselves can become the stuff of comedy. Family therapy, unless someone screws it up, automatically counters any anti-therapeutic belief that people lack the power to either change what can be changed or to endure what cannot be changed and therefore live in an imperfect world with the rest of us.

Therapy, in order to shake people loose from their tragic stances and bounce them into the human comedy, is at its best when it is funny, when the tragic family story being acted out is rewritten to provide a happy ending. Therapeutic laughter is a way of acknowledging, "Yes this is a shared experience. This is the way life is for all of us. You and even your feelings need not be alone anymore." In my therapy, I don't eschew laughter, but the patients have most of the funny lines.

A father, berating his son, looked at me and puzzled, "I don't know what that boy's mother did wrong. It couldn't have been anything I did: I was hardly ever there." I laughed, the mother laughed, the boy laughed and finally even the father could see his own absurdity.

Another father had been deserted by his parents and raised in an orphanage. His wife complained that he was not sufficiently loving to their son. He pouted, "How can you expect me to be loving when I have never been loved? The only people who even tried either gave up or pissed me off." I laughed. It took him a while to laugh about it, but once he could see the absurdity of his lifelong pout, he started connecting with the people around him, learning that he was no different from anyone else.

When people feel what they feel so deeply and so desperately, they can lose the ability to see the absurdity of it. When they put their feelings into words, they can often see the absurdity. But sometimes they can't see it until someone laughs at them lovingly and acceptingly. The laughter is the breath of life, the exclamation that you have discovered an alternative to death and despair, a way out—not of course an alternative to the human condition, but a way to transcend its loneliness by merely joining it.

The Theory and Practice of Therapeutic Optimism

I urge therapists to keep these simple guidelines in mind as they go through their day. In time, they may find the human comedy beneath all the tragedies. Their clients will be grateful.

1. There is little in human experience that is unique. The healing of any trauma, whether random, malicious, well-intentioned or self-induced, requires an understanding that this too shall pass, that it is one of the ills the flesh is heir to, and whatever we experience can just connect us more tightly with our fellow humans. It is not nearly as important to understand why it happened and who is to blame as to figure out what we ourselves can do to face it, to prevent it, and to handle it better next time.

2. Therapy is often about serenity, as described in Reinhold Neibuhr's famous prayer, "God, give us grace to accept with serenity the things that cannot be changed, courage to change the things that should be changed, and the wisdom to distinguish the one from the other." I would nominate humor as even more actively helpful than serenity in understanding life rather than just accepting it.

3. There is no position in life quite as weak as "It's not my fault." Therapists should never disempower people by putting them in the victim position. Our job is to get them out of that position of guilt-free helplessness and to build some healthy guilt, with awareness of their power in relationships and their effect on other people.

4. Your suffering patients who have screwed up in various ways can be seen as merely misinformed rather than bad. It is equally helpful to detoxify our clients' past and present persecutors, by attempting to explain how they might be similarly misinformed rather than perverse, demonic or abusive. If we apply a family perspective even in individual therapy, we can help people to understand one another rather than to slink through life anxiously escaping from one another.

5. What we therapists bring to therapy is not our greater success in life or our greater capacity for love, but our experience of living intimately through a great many lives and thus getting a perspective on what life is really like when the fairy tales are stripped away. We must pass that on.

This blog is excerpted from "Turning Tragedy into Comedy," by Frank Pittman. The full version is available in the November/December 1995 issue, Clinical Virtues for the 90s: What Makes a Good Therapist Good?

Love your wonderful perspective. There is a lot to,think about in this essay. Thanks! Larry