Brainstorming Ways to Make a Difference 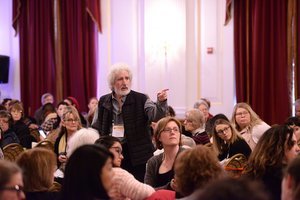 As an estimated half-a-million protestors poured into downtown Washington, DC for the March for Our Lives, therapists who were in town for their field’s largest annual conference—the Psychotherapy Networker Symposium—crowded into a large meeting room just a few miles away in the city’s Omni Shoreham Hotel.

When they’d filled rows upon rows of seats, many of these mental health workers sat on the floor and stood against the wall. There was a heightened edge in the room, an animated restlessness as they introduced themselves to their neighbors, and waited for something vital to take place.

That morning, they’d raised their hands high with thousands of other attendees for a moment of silent solidarity with those gathered for the march, and now they came together for what they hoped would be a productive discussion about actions that could prevent further gun violence in their communities and schools.

Therapists are often at the center of cultural conversations around large-scale shootings, the aftermaths of which often elicit passionate cries for tightened gun control and critiques of the mental health community. Many work on the issue of gun-violence prevention, at least tangentially, in their roles as mental health practitioners seeing troubled men and boys. They’re also often involved as crisis counselors responding to the trauma that lives on for survivors of gun violence and their loved ones and communities.

Clinical psychologist Ron Taffel, who’s had a decades-long career treating youth and working with schools and had agreed to facilitate the meeting, started off by reading an excerpt from a Networker article he’d written in 1999, in the aftermath of the Columbine shootings, that examined the wish for celebrity behind many acts of violence by kids. When he finished, there was a palpable gasp in the room. Had this reality been with us for almost 20 years now?

Taffel went on to say that the shooting survivors at Saturday’s march were doing something that hadn’t been seen in the intervening decades. They were not only stealing the spotlight from the shooters, but turning it on the adults who’d failed to protect them. These crusaders were now the celebrities, doing all they could to make sure it didn’t happen again.

Before encouraging attendees to share their own suggestions, Taffel touched on concerns that he felt therapists could address with both kids and adults, including confronting ignorance about the impact of pop culture, peer groups, and technology on kids’ psyches; acknowledging the new anxiety among kids derived from social, academic, and economic pressures gone off the rails; and understanding the paradox of teens appearing self-assured but secretly yearning for adult guidance and support.

He reminded therapists that they possess inside knowledge of a community’s life, its hidden needs and vulnerabilities. And that their communities will benefit from their insights if they’re willing to take the lead in local actions around mental health issues and gun violence.

With a show of hands, those gathered identified themselves as private practitioners or staff at mental-health agencies, hospitals, schools, and faith centers. They were from the US and other countries around the world. One clinician from Columbia, notorious for rebel conflicts and the violence of drug cartels, made a point to say citizens in her country did not have access to military-style weapons, so kids shooting one another was not one of the issues they grapple with there. “It is not inborn,” she said. “You seem to know how to teach violence well here.”

One woman stood to say she was connected to one of the Parkland shooting victims personally and was heartened and grateful to find so many caring people had come together to find solutions. A therapist, her voice breaking, expressed horror that her very young child was now participating in school shooting practice drills. Her deepest hope, she said, was that they would soon end and her daughter wouldn’t grow up with the specter of gun violence hanging over her school days.

As Taffel stepped off the dais and into the crowd, concrete suggestions started to fly and Lauren Dockett, senior writer for Psychotherapy Networker, wrote them down. Many of these were actions therapists were already taking or knew about in their communities. Those who’d recently experienced violent disturbances close to home—a murder-suicide, a teenage girl threatening a mass shooting—talked about the importance of collaboration with law enforcement, local justice, churches, businesses, and schools. Some involved personal action that therapists could take as citizens and parents. They included:

As the meeting came to an end, some participants stayed behind to share details of their ideas with one another or add them to the growing list on the flip chart. The energy was still high, and people told us they were ready to commit to action and could use all of this information in one place.

We know the list provided here is limited and there are many resources are there. We encourage anyone who’s interested to add their ideas in the comment section or to our Facebook or Twitter pages. Therapists may not have all the answers to our country’s gun violence problems just yet. But from what we saw in that room on March 24th, they can make a huge contribution.

Grateful to have been Part of this national conversation of social workers on gun violence by Ron Taffel. Feel free to make a copy of this working list and circulate it to those “influencers” In your local community or consider starting your own local group or taking action by joining One of these action groups. Semiautomatic weapons do not belong in our schools.