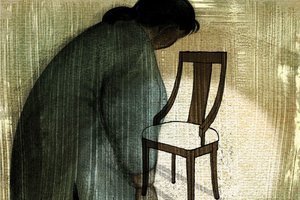 As a therapist who specializes in working with eating disorders, I often see people in my office who struggle with issues around restricting their food intake, overexercising, or engaging in purging behaviors. Although binge eating disorder (BED) is the most common type of eating disorder—with a 3.5 percent prevalence rate in the United States, compared to 0.9 for anorexia and 1.5 for bulimia—many people suffering with it don’t get the help they need because of their embarrassment about their bodies and eating habits. They often have long histories of disordered eating, multiple unsuccessful diets, and shameful interactions with medical professionals. Many of them avoid seeing therapists for fear of more shame and more useless advice to just stop eating.

Because people with BED have higher rates of depression, anxiety, and addictive behavior, many therapists overlook the symptoms of BED, which include recurrent episodes of overeating, even when not physically hungry, a sense of lack of control during these episodes, eating more rapidly than normal, feeling uncomfortably full, and feeling guilt after overeating. Research suggests that 30 to 40 percent of individuals seeking weight-loss treatment could be diagnosed with BED; however, not all larger-sized individuals have BED, nor do all of those who have BED necessarily have larger body sizes.

Despite its prevalence, BED didn’t get its own category in the DSM until 2013, meaning that it’s no longer grouped into the “other specified” category and has been defined as a condition requiring specific treatment. Of course, the approach to treating it and related concerns is similar to other eating-disorder work, but we need to be especially vigilant about addressing issues of self-agency and keeping their focus more on wellness than weight, even though societal, family, and often medical pressures can run counter to that approach. In my work with Diane, these pressures were so strong that we had to recommit to a focus on emotional well-being several times throughout treatment.

In our first session, Diane, a 34-year-old graphic designer, let out a sigh of relief as she saw the couch in my office and realized she wouldn’t have to struggle to fit into one of the chairs. She began boldly, “I’ve gained about 200 pounds since college. I’m now 350 pounds and need to do something about this.” She explained how she’d tried dozens of diets and hadn’t been able to stick with any of them long enough to make any difference. Her medical doctor had brought up the idea of gastric bypass surgery several times, but Diane had read about the risks of this procedure and wanted to try something else.

Some of the struggles she described highlighted her deep shame about her body size and eating. She was embarrassed to sit at a table in a restaurant and was self-conscious about filling up her shopping cart at the grocery store, so she usually ended up getting most of her meals by frequenting drive-throughs or ordering takeout to her home. She ate quickly, in secret, with guilt.

Diane recounted some of the details of plans she’d been prescribed over the years—more than 20 different approaches that left her feeling like a failure because she could never stick with them. “Which diet do you recommend?” she asked tentatively.

“I don’t think you need another diet,” I told her. “You may be thinking you’ve failed at dieting, but it’s the diets that have failed, because they don’t work long-term. I do, however, believe that shifting your relationship with eating would be useful. I also believe we might need to do some work on underlying issues that may be contributing to some of the patterns.”

I shared with her how I approach eating disorders from a non-diet perspective and suggested that we work on health from a broader perspective. I explained how most people find they have more success in shifting specific behaviors than in focusing on a specific target weight. As we talked about this new way of approaching the process, she was intrigued but a bit anxious. She liked the idea of focusing less on weight, but was such a people-pleaser that doing something so antithetical to what everyone expected of her, which was simply for her to drop numbers from the scale, created some internal tension. We went on to discuss some of her other anxiety issues tied to eating, such as experiencing so much worry over what to choose from a menu that she often ordered multiple entrees to make sure she liked what she got.

When Diane returned for her second session, I asked my typical question of whether anything from our first session was unclear or striking. What stuck with her the most, she said, was when I’d told her, “You have an eating disorder, not a character flaw.” She’d felt, as do so many with BED, that her overeating was a willpower issue and had never considered that it might be much more than that. She’d come to feel excited about focusing on improved health and overall self-care. “I see now how dieting was part of what triggered my binge eating,” she added. “It became more damaging than helpful.”

“You got it, Diane!” I said. “I’m pleased that you heard that takeaway message so clearly. I get the feeling you’re not used to treating yourself with compassion, but I sense that you made some space for considering that as a possibility. Thank you. I’m excited for us to begin the journey of figuring this out together.” I felt enthusiastic, but was mindful of choosing my words carefully so as not to suggest this was a simple fix. This journey is difficult, long, and unpredictable. Diane would likely have ups and downs in her progress, while continuing to feel pressure to do the quick fix of diet or surgery.

Part of our work over the next few months would be psychoeducational, challenging Diane’s many distorted ideas about eating and her body. She assumed, for instance, that her larger-sized body meant she’d be able to sustain herself on very little food each day, something she’d tried repeatedly only to find herself ravenously hungry each evening. She also assumed that when she did eat, it should only be low-fat, low-carb, diet foods, and this further left her feeling deprived and more ravenous. I talked about basic biological needs and introduced the HAES (Health At Every Size) approach. We also talked about fundamental behavior changes, such as slowing down her eating and chewing more mindfully. Eventually, she agreed to experimenting with the steps of mindful eating in our sessions, so I could help her find ways to tune in and allow her meals to be more satisfying, thereby decreasing her excessive cravings.

“I don’t think I ever really tasted all the flavors of the eggplant curry I order so often from the place down the street,” she told me one day. “When I got it last Friday, I did inhale some of it, but then I remembered to slow down, breathe, and noticed more about the textures and the spices.” Diane paused and added with a smile, “I even ended up putting some of it into the refrigerator for lunch the next day. I’ve never done that before.”

“Diane,” I grinned, “that’s fantastic on so many levels—doing a U-turn midmeal, refocusing on the skills you’ve been learning, and even fighting some old urges to eat everything even when you’re full. Wonderful examples of progress!”

In working on the eating changes, we slowly uncovered other anxiety-based habits that had been contributing to her BED. She had some symmetry superstitions that led to her feeling that a pizza had to be completely gone or exactly half gone, and some obsessions around certain numbers, such as feeling she needed to plate items in multiples of five. We approached each of these through practicing exposure and engaging in doing the opposite of what her anxiety commanded. After a while, she could catch herself more often when anxiety threw a rule at her, frequently saying to me, “I remembered last night not to believe everything I think.”

I was pleased about the many behavioral and mindset changes Diane was making, but I knew they likely wouldn’t lead to quick weight loss. And as I suspected, her excitement about these changes waned whenever the weigh-ins at her doctor’s office indicated only one or two pounds of weight loss. At these points, we needed to review the goals of our broader wellness work—which eventually led Diane to take my recommendation of seeing a specialized nutritionist. We discussed how weight maintenance is actually progress, as it’s different from the monthly weight gain that had been the case for years. “Remember to zoom out for better perspective,” I regularly reminded her.

Diane has continued to lose weight, sometimes only a few pounds in a month, and to take steps toward normative, mindful eating, as well as positive activity routines. Recently, she took a vacation to one of her bucket-list locations, Rome. She was annoyed with having to ask for an extender seat belt on the airplane and with having to take frequent breaks while walking around the city, but she had much more to say about the sites she’d seen and the excitement of travel. She’s also started experimenting with recipes and cooking several times a week. “I don’t have to be embarrassed that I like to eat good food,” she tells me now, “and taking the time to make good, healthy food for myself is part of my self-care.” Our work is ongoing, but our sessions are less frequent now. Most importantly, she’s no longer just waiting for the weight to come off before making important changes toward physical and emotional well-being.

This blog is excerpted from "From Weight to Well-Being," by Sandra Wartski. The full version is available in the January/February 2018 issue, Not Your Grandfather's Therapy: Meeting the Needs of Today's Clients.

Your article is very good, but I wonder why you had to mention your client's weight loss at the end? Was this always a goal of treatment? We know that some people do lose weight as their relationship with food changes, but not always -- in fact this is unusual according to BED studies. I am concerned that so much good information was shared and then the "weight loss" bomb was dropped. As someone who is in recovery from higher weight BED, there was a day when I would have seen this article, felt good about it, and then felt shame because wasn't losing weight as part of my recovery and your client was apparently. It doesn't seem to be an important part of the story, just an add-on because weight loss is viewed by some as a requirement of recovery from BED.