Couples Therapy with a Positive Spin

How to Accomplish Something in Every Session 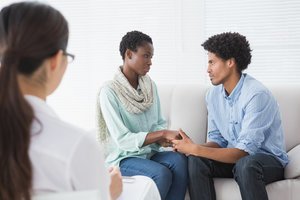 Q: I often feel drained after a couples therapy session, and sometimes I sense the couples feel the same way. What can I do differently to make the experience better?

A: Doing couples therapy isn’t easy. In fact, there was a time, many years ago, when I’d leave my office and wonder if I was being paid enough to endure what felt like soul-sapping work. The hurt, the blame, the accusations—the fact that many couples couldn’t even agree on what was black and what was white—left my head spinning. I wondered if it was just taking too much out of me and I should instead focus on individual and child/family work. Fortunately, I hung in there and developed new methods, and variations on old ones, that have made my work with couples not only enjoyable, but most importantly, much more effective.

So how did this evolution occur, and what do I now do differently? First, I realized that one of the most distressing aspects of the work for me was when a couple left the session—even one I felt was particularly good—feeling discouraged or overwhelmed. Though most of my clients felt closer for having worked through some difficult feelings, it wasn’t uncommon for couples to also feel depleted and worn out, as if they’d been through the ringer.

As a therapist, I wanted to believe I was helping people feel better, and it was disheartening to hear the opposite. I knew I couldn’t prevent these kinds of reactions every time, but I wanted to do better: I wanted couples to leave sessions feeling that they’d accomplished something, and that the work hadn’t been arduous. I wanted them to be more optimistic when they left my office and to look forward to our next meeting. And I wanted to do this without minimizing or glossing over the extreme problems and dysfunction that often lead couples to seek help.

Perhaps this was a tall order, but I was determined to try. As it turns out, it was more achievable than I’d anticipated. Now, almost everybody who sees me for a first session wants to continue the work, and more importantly, it’s rare for anyone to drop out of therapy or hang in there with a suffering attitude. Plus, the changes I made in my way of working can readily be incorporated into any theoretical approach to couples therapy to instill hope, combat demoralization, and increase each person’s motivation to change. And as we know from research, hope is one of the essential ingredients for a successful outcome in couples therapy.

My first goal became to make the initial visit a positive experience and convey that the work would be as much about the strengths in the relationship as it would be about what needed to be worked on. Most couples therapists aim for this, but the tweaks I applied to what I’d customarily done have made a big difference in making that goal achievable.

First, I’m now explicit with clients about what I call the occupational hazard of couples therapists, explaining, “It’s easy for therapists to focus so much on a couple’s difficulties that we forget about the things in the relationship that go well.” I then lay out the structure of the first meeting, saying, “To make sure that I really get the whole picture of your relationship, and not just your problems, I like to spend just 10 or 15 minutes getting an idea about the difficulties that brought you here, and then put those on the back burner. At that point, I like to use the remaining time hearing about what used to be good in your relationship and what might still be okay.”

Of course, finding out about what drew the couple to one another is standard procedure for couple therapists. But I started spending a much larger portion of the first session on that topic. Now, I’ll ask the couple to elaborate on the qualities they each described. If someone says, “he was very supportive,” or “we had the same values,” I’ll ask for an example to give me a fuller sense of what that person meant. Or I’ll ask questions that might result in more depth, such as, “As you got to know each other, what made it go from just having fun to feeling that you could go forward in life together and be partners in the inevitable ups and downs of the future?”

Often it’s been years since partners have heard each other speak positively. And sometimes they’ve never heard their partner articulate what traits they’d noticed and deeply valued. Generally, each person is deeply touched by what the other says, and for a few moments, they’re able to access loving feelings that may have been deeply buried for a long time.

After hearing what had drawn them to each other in the past, I’ll ask them if they ever still see any of those same qualities or have any of the same experiences with each other. Frequently, despite the negative feelings they may have mentioned at the beginning, they respond almost incredulously with “yes, of course, I still think he’s very funny,” or “yes, she’s incredibly loyal,” or even “yes, we can still go out and have a really good time together.”

Most couples think that therapy will be about venting their complaints and enlisting the therapist’s help in getting the other to change. One of my goals in a first session is to dispel this misconception and plant the seed of a way of working that’s likely to be far more gratifying. To this end, I often state, “Though our initial goal is to help you get along better and repair the hurts that have resulted in a frayed relationship, given what you’ve each said about what it was like between the two of you when things were good, I’m hoping I can also help you feel happy and lucky to be together. To get to that point, we’ll eventually be talking much less about the arguments and patterns that are making you so unhappy, and more about what you’re longing for from each other.”

It’s all well and good, you might say, to look at positives in the first session, but how on earth do you continue to do that when couples seeking therapy are filled with painful emotions? Often they’re profoundly hurt, furious, and alienated from each other, and one session of focusing on more positive feelings in no way undoes the feelings that led them to seek help.

The key to continuing to locate and build on strengths lies in becoming acutely aware of just how many opportunities you have to influence the direction of the work. Virtually every statement uttered in a session presents the therapist with numerous decisions about what to pick up on.

Often there are implicit positives in statements in which the main point is anger, disappointment, and hurt. With practice, therapists can learn to pick up on the strengths that are embedded in painful emotions. It’s not that therapists should ignore the main point of what’s being presented, but that they should also notice and comment on other dimensions. It takes conscious effort to find the kernels of good interactions that can exist despite, or side by side with, the dysfunctional ones.

Crucial to feeling good about the work is accomplishing something in each session. I’m not just “making nice.” Staying focused—not letting one topic morph into another and yet another—is essential. So, too, is keeping in mind the problems the couple came to therapy to solve, even when the conversation is strategically pointed in other directions. At the end of each session, I sum up what we did that day and what they’re going to try to work on before our next meeting. And if at all possible, as they get up to leave, I end the meeting with some additional positive feedback, like “We got off to a rocky start, but there were a number of moments when you showed real empathy for each other.” You may be thinking, but what if there wasn’t much that was positive? I have two answers to that. First, if you incorporate some of what I’ve described, you’ll find that sessions will go better. And second, you need to cultivate an attention to the positives. Seek, and you shall find!

This blog is excerpted from "Keeping Couples Therapy Upbeat," by Ellen Wachtel. The full version is available in the January/February 2018 issue, Not Your Grandfather's Therapy: Meeting the Needs of Today's Clients.