The Healing Power of Uncertainty 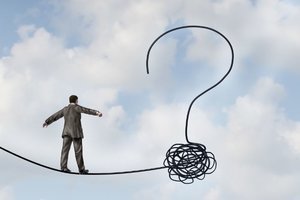 After two decades of working with people suffering from phobias and other expressions of disabling fear, I still remember clearly a client whom I met more than 15 years ago—a woman whose "cure" for crippling anxieties was worse than the fears themselves.

Dorothy was a 72-year-old married woman with two grown children. She belonged to a self-help group to whom I taught cognitive and behavioral techniques for overcoming phobias, anxiety disorders and obsessive-compulsive disorder (OCD). Dorothy was afraid of being alone, afraid of the world outside her house and above all afraid of fear itself—afraid of feeling trapped and experiencing a panic attack.

She had had her first panic attack in response to events that would terrify anybody. When she was in her thirties, not long after she had given birth to her second child, her husband had come home in a drunken rage and brutally beaten her, breaking her jaw.

By the time she turned 40, she had remarried and fashioned a life whose guiding principle was to avoid danger, risk and fear at all costs. She had stopped driving for fear of panicking in a traffic jam and hitting another car while attempting to escape. She rarely went to restaurants or movies, and when she did, she sat close to the door, took frequent breaks in the lobby and always left before the movie or meal were complete. She never stayed at home alone at night, nor did she go out in public alone.

Perhaps by some strange algebra, Dorothy could be counted a success: by living such a narrow, predictable and constricted life, she hadn't had a panic attack for more than 30 years. "I never push myself," she told me. "I stay away from anything that produces that trapped feeling." But freedom from panic was her only freedom. In 30 years, she hadn't seen the end of a movie, left our small North Carolina town or enjoyed a solitary walk or evening alone at home.

In the weeks that followed, I suggested Dorothy learn deep breathing and relaxation exercises and gradually expose herself to feared situations until she got used to them. She might try to sit through an entire movie without fleeing to the lobby, I suggested. Or stay home alone while her second husband took a 15-minute walk. Dorothy never tried the exercises. These classic and often successful cognitive-behavioral approaches might have been effective, but in the short run they would have produced discomfort and uncertainty. In making comfort her highest priority, Dorothy had traded her liberty and autonomy for a life of dependence and constriction.

Over the past decade, other failures of "compliance" have shown me that the battery of effective techniques usually brought to bear on anxiety disorders (relaxation, cognitive restructuring, behavioral techniques, exposure, breathing skills and pharmacotherapy) are insufficient in a vacuum. When clients are simply given exercises and expected to obediently carry them out, treatment can become as rote, unfruitful and ritualistic as the obsessive behaviors and emotional responses it is designed to treat.

I have found that therapy with anxious clients is most effective when I repeatedly challenge their underlying beliefs about how to handle distress and solve problems. Anxious clients don't need my cleverness. They need therapeutic principles powerful enough to offset their faulty beliefs and a therapeutic relationship that makes room for intuition, encouragement and the client's own creativity. I have since learned to help more people like Dorothy by challenging three of their most basic life stances: their attitudes toward worry, certainty and comfort.

As long as they lean on worry, certainty and comfort as allies against danger and fear, these clients will not practice even the most precisely targeted behavioral exercises in the world. And when they change their orientation toward worry, certainty and comfort, they are like martial artists taking a balanced opening pose. With their stances corrected, they become warriors in touch with the enormous courage and motivation needed to do battle with disabling anxiety disorders.

Yolanda, an outwardly attractive and composed 42-year-old mother of two, had had OCD so severely for 21 years it had destroyed her first marriage and made it impossible for her to work outside the home. She was terrified that doors or windows would be left unlocked at night, continually checking and rechecking them. She was even more obsessed with the idea that she'd contract rabies from a car tire, parking lot or driveway, and pass the disease on to her two children and kill them.

In our first session, I concentrated on a single principle, which I wrote on the whiteboard in my office: to practice having obsessive urges and not responding to them with compulsive behaviors.

She returned a week later to report she had tried out my technique, by dusting the TV and another table and not washing her hands. But her focus quickly moved away from her practice of the classical technique and onto something less predictable. After our first session, she told me, she had felt angry all day long at the way OCD had run her life. She had begun to personify and externalize her OCD as an enemy, rather than seeing it as the friend that had kept her and her children safe from the "real" danger--rabies. Her anger at OCD was the first sign that she was beginning to realize that the real problem was not the content of her obsessions, but the anxiety that led her to focus on them.

In our second session, I built on her success by listing three concepts on my whiteboard:

1. I'm willing to be uncertain;

3. I must be distressed for prolonged periods in order to get better.

That was it. No techniques. No skills. No homework. No tasks. She walked out and went to work, making up her own exercises to carry out the concepts. At our next session two weeks later, she told me she had been keeping a journal of all her OCD-related activities and was touching things that she used to avoid. But she wasn't exposing herself to outdoor objects that she feared might carry rabies. She was still too afraid that her daughters would get sick and die, and much as she wanted to get well, nothing was worth risking that terrifying outcome.

I didn't reassure her that nothing terrible would happen. But she would win over OCD, I told her, if she held fast to the belief that her battle was with the physical symptoms of her anxiety, not with the content of her obsessions. It wasn't about germs or rabies or salmonella. It was about the fear of feeling distressed.

Yolanda left with this simple, specific instruction: "Focus on anxiety, not content." Over the next month, she stopped drinking and pumped her own gas for first time in years. Despite continuing feelings of doom and difficulty sleeping, she no longer washed her hands after touching the television or other previously taboo items in her house.

After her fourth session, I decided to walk Yolanda to her parked car. It was an unusual thing for me to do, and I didn't know why I was doing it. Nevertheless, I trusted my intuition—anxiety disorders are governed by irrational beliefs, and I had a hunch it might be effective at this point to move beyond a rational framework. As we stood by her car, I asked her, "Would you let me touch my hands to your tires?" She appeared visibly shaken and her face paled.

Finally she nodded her head. I walked around to each tire and dirtied my hands. As I turned around after touching the fourth tire, Yolanda was directly in front of me. With tears rolling down her cheeks, she grabbed both my hands in hers and squeezed. Without speaking, she got in her car and drove away. I was left standing in the parking lot, shocked by what she'd done. But I stayed with my discomfort and uncertainty and waited two weeks.

She returned to tell me she had gone home that day feeling contaminated with rabies, but hadn't washed her hands until suppertime. Since then, she had been doing more and feeling worse: every hour during the day she had been practicing another exposure, even though she got into bed terrified every night. The groundwork was laid and Yolanda's attitudes toward worry, uncertainty and comfort had been transformed. After five sessions, she progressed steadily. Within the year, she started working again as a nurse's assistant and returned to school. She earned her nursing degree over the next two years and now works full time, symptom free.

I wondered, as therapists often do, where exactly in the course of our therapy the magic had occurred, and during our sixth session, Yolanda tried to explain it to me. After groping for words, she looked up and past me, stretching out her arms in a dramatic gesture toward the whiteboard on my wall. Then she leaned forward, excitedly declaring, "What you put on the board! That's what you did; that's what you did! You put on the board how I need to feel anxious and feel distress 'for a prolonged time.'" She pulled her hands in to her chest and mimed the idea of feelings progressing down her torso. Laughing now, she said, "I had that memorized and I still say that to myself! Little by little, I started touching things that distressed me. Then I'd say to myself, 'you're going to have to feel anxious,' and I would resist the washing.”

As tears welled up, first in her eyes, and then in mine, Yolanda told me. "Yesterday, I accepted flowers from my daughter for the first time. It was the happiest day of my life."

This blog is excerpted from "Everyday Courage," by Reid Wilson. The full version is available in the September/October 2000 issue, Making Schools Work: What Therapists Have to Offer.

Uncertainty has always been an issue for me.