Step One: Confronting Your Own Limitations 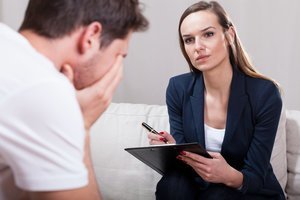 I'm sitting with the Pattersons, an old married couple, kids mostly grown, and she's hammering away at him. It's a first session, and I can't tell whether her startling bursts of anger are old hoary business or new. She's resurrecting incidents from 15 years ago, his affair, his drinking then, something he said here, something he did there, as if these had never before been aired between the two of them. He's not especially defensive, saying, "I know, I know," then proceeds to get lost in philosophical circumlocutions. In turn, she apologizes for her rage, but soon starts up again.

I ask, "You folks do this a lot?" They both say, "No," and she angrily says that she's kept silent for a long time. But he rolls his eyes at this, and they both describe how they've been battling for years, so I'm confused. Trying to figure out who knew what when, I ask them, “Why is this all coming to a head now?" but they look as puzzled by the question as I am by the freshness of her anger.

I am not bothered much by my own confusion however, not especially anxious, although I am keeping a wary eye on the rising intensity between the two of them. The poet Keats called this space "negative capability," a capacity to hang in ambiguity without any "irritable reaching after fact." So in sitting with these painful feeling her glowering resentment, his hangdog spirit I am finally moved to ask a more fundamental question: "Are you two questioning your love of each other?" There's enough silence to mark a roomy, echoing space, and I go on, "I mean, do you question whether you are loved, or do you question whether you feel your own love for the other?" They are genuinely relieved by the directness of this question. So am I. For the rest of the session we talk about pure love and ambivalent love and mature love and weary love and other mysteries of loving, until the husband, remembering his father's wretched inability to love his wife or his children, jolts me by suddenly gulping great tears. It seems his father had died barely two months before, but until this moment, the couple had not connected the father's death with their own mysterious crisis.

I offer this vignette not in the spirit of "how to do" therapy but rather in the spirit of "how to be." When I was a novice therapist, I often found it too excruciating to sit with other people's pain. In my anxiety, I talked a lot, jumped in early with directives, thought I understood things that I was nowhere near imagining. Caught by the distress and confusion in my clients' lives, I wished, ached, longed for the day when I had so much experience and savvy that I would know, always, what to say or do that would relieve their burden. I imagined that I would not be sitting there, caught in my own doubts and confusions, trying on this theory or that, held in imaginary conversation with a supervisor, but rather would know. Now it is years later, and I know a lot, my experiences are rich and meaningful, my theories tested and honed and revised. But slowly I have come to realize that what I am getting paid to do is tolerate just these crosscurrents and tricky undertows of theory and experience and emotion.

The longer I practice, the more I am struck with the importance of this capacity of tolerant, hovering attentiveness that therapy demands---an attentiveness that looks, Janus-faced, both outwardly at the client and inwardly toward the therapist's own processes. The demand for this attentiveness cuts across all sorts of ideas of what therapy is, what therapists do. In fact, it's a spirit I can recognize now in a range of human activities. In honor of its place for several thousand years in Buddhist and other meditative practices, we should call it mindfulness. Mindfulness is the capacity for here-and-now presence. Like a lot of really simple things, it's hard to do. It's easy to slip clean away in a therapy session, especially if feelings are deadening or overstimulating, if problems are tediously knotty. One moment you're there, the next moment you're stuck up in some quiet room in the attic, lost in thought. Typically, I might find myself, chin in hand, brow knit, puzzling over a client's dilemma: What's the matter? How do we fix things? I begin to notice that in my attempts to peg the problem, I have become disconnected from the person in front of me. The truth is, the direct experience of another human being can be terrifying; in exercises when two people gaze meditatively for more than a few moments on each other, face to face, I have seen people burst into tears from the intensity that is generated.

What we typically do in order to stand so long in the presence of each other is think and judge. We can always count on our minds to produce plenty of internal chatter to keep us distracted. We can especially count on our minds to crank out an unending stream of carping analysis. How much easier to hunt for something wrong. Perhaps, lost in his or her discontent, the client begins to appear whiny or boring or irritating to me, endlessly repeating complaints, ungratefully ignoring my wise remarks. Perhaps I start to feel I am a bad therapist; I should be wiser, more skillful, more dedicated, more empathic.

Growing alienation, distractibility, anxiety about how it's going—these may be reactions to the client's problem but more likely are indications that, in some way, I am not really tuning in. To tune in to the client, I have to let go of my own demand to fix or understand them. I might have to abandon my hard-won sense of knowing, my prized experience, and instead sit there, open, expectant, empty. Mindfulness has a certain spaciousness to it, a quality of emptiness, as if allowing air and light into the growing tension and clamor of a therapy session and into the chatter of my mind.

So, sitting with the Pattersons, getting temporarily nowhere, I am able to give up for a while to get the details down pat. Calming my own mind down, I sit back to observe the flow of energy between the two of them. I notice that while she is making accusations, he doesn't make countercharges; she fires a rock at him, but he won't fire one back. At first, I find myself appreciative of his restraint, even perhaps a little too appreciative, being for the moment spared an all-out battle between them. But soon I notice how he is almost welcoming her accusations, as if he deserves the punishment. Is he feeling guilty and is he feeling helpless in that guilt, as well? But rather than getting caught up just then in ideas about guilt, I keep the space open, just listening to their tone with each other. I notice at last that whenever she softens her voice, when she lets up on the punishment, he does not look all that interested or relieved, but rather makes another round of vague and tangential remarks. I find myself feeling disappointed in him, then I start to wonder what would make a person unable to respond to someone's warmth. Actually, "wonder" is too cognitive a description, imagine a kind of gentle curiosity, tolerant, expectant, not rushing to judgment. Open.

Even though the two rarely look each other in the eye, I notice moments when each listens well to the other, cocking a head in attention, nodding to follow a statement. I feel a steady flow of their attachment, as if all this really matters. But watching him ignore another conciliatory gesture from his wife, I get to wondering whether he thinks he deserves any love, even when it is being handed to him. Is he really so un-movable? I feel weary for him. And then, resonating with his weariness, I start to feel how incredibly hard it is to keep loving someone. My own heart opens up in warm recognition: what a terrible and human and real problem that is, to expect ourselves always to feel unambivalent love. I've been trying to understand what to do with that myself. That question about love "Are you two questioning your love for each other?" took shape when I observed his eyes dart away, before he started on one of his vague speeches, as if he were looking into his heart and coming up empty-handed. That's the short answer to how the question about love popped up. But the long answer is that it is a question that vitally engages me, that evokes my own sense of mystery. How does married love last? Must we inevitably arrive at the wreck?

The capacity for mindfulness, for sitting with others, is truly an exercise in slowing down and opening the heart. Being in the ebb and flow of a therapy session requires attention to nuances and shadings of another human being, nuances impossible to capture in texts and training manuals. That's why mindfulness is so important to cultivate, because as a human being, even as a very good, highly trained therapist, you can't really know another human the way you can know that an egg hard-boils in seven minutes. What is necessary to understand another human being must come from, resonate with, be filtered through, our own humanity as well. Wrestling with my own limits prepares me to sit with other people's struggles with loss and ambiguity. That's the kind of knowing a therapist needs: the generous knowing of a person truly present both to one's own experience and the experience of others.

This blog is excerpted from "Mastering Mindfulness," by Molly Layton. The full version is available in the November/December 1995 issue, Clinical Virtues for the 90's: What Makes a Good Therapist Good?

Molly, Thank you so much for this beautifully written testament to what is ultimately asked of us as psychotherapists. I have been grappling with my own capacity for being present and not get mired in wanting "to be helpful" at the expense of real attunement. So timely for me and I am grateful for your insight and ability to articulate it. With gratitude, Heather