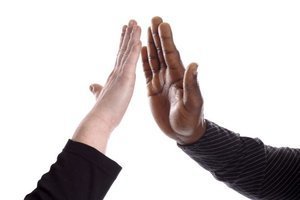 At 14, Malik is nearly full grown. He bops into his first therapy session dressed in jeans so baggy that two of him could fit into them, with a 3-inch black belt that doesn't do anything to keep them from riding so low that they could fall off at any moment. He's here because he has been suspended from school for talking back to his teacher. As he slouches in his chair and looks bored, I sit with the team, observing the session through the one-way mirror.

Valerie, the therapist in the room, is a white woman in her early thirties, one of my trainees. Because Malik is African American and dressed in the uniform of his generation, I worry that Valerie will automatically experience him as menacing. As she closes the door, I can already sense how her discomfort pervades the room. A fine therapist, Valerie is clearly more guarded and tentative than I've ever seen her. Later, she denied she was afraid of Malik then added that she was never comfortable with teenagers. When we discussed it further, she said she worried that admitting to being afraid of a 14-year-old African-American boy who hadn't done anything but slump sullenly in a chair would mean she was a racist. This is a problem many of my white colleagues and trainees encounter: when is their fear justified, and when is it the noxious fallout of racism?

Malik describes his unhappiness in school, telling the therapist, "You can't trust the Man," and "They're out to get you." He is speaking in code, raising the issue that is foremost in his mind, yet Valerie is reluctant to pursue it. She keeps asking him general questions about his life, ignoring his many allusions to racism. At one point, Malik makes a reference to the O.J. Simpson trial: "I grew up hearing about two things you don't do," he tells Valerie, "you don't mess with the Man's money, and you don't mess with the Man's women." After confirming that Malik is referring to whites, Valerie carefully replies, "Yes, I guess some people do have trouble with interracial couples." Malik suddenly becomes very alert and asks her, "What do you think?" Startled, she answers, "What I think isn't important. People think different things." But Malik insists on getting an answer. "No I'm asking you," he says. "What do you believe?" When Valerie says she has never thought about it, Malik persists. "I guess I probably wouldn't want a son or daughter to date someone black," she finally tells him. "But it's not because of what you might think. It's just too hard, given the way things are."

"I'm glad you said that," Malik tells her, looking directly at her, sitting up straighter, his voice louder, "because this is how you white people feel. Only, you don't want to be on the up and up about it. So I got to walk around feeling like I'm fuckin' crazy." Behind the mirror, none of us seems to breathe, each of us wondering if this session is about to get out of control. I am torn between wanting to jump in to "rescue" Valerie and wanting to let both her and Malik learn from each other. I'm not altogether sorry the conversation has taken this turn: the issue of race is definitely out on the table now. Malik and Valerie need to address it head-on. But the problem is, Valerie is uncomfortable not only with the topic, but with the vehemence of Malik's expression. As he seethes with pent-up anger, Valerie's response is, understandably, to divert it to something safer.

This is one of those tightrope moments in therapy, the pivotal seconds when the core issue, the raw emotion, is finally out there. I know it will be exhilarating to get to the other side, but I am also acutely aware of the danger of walking this line, how easy it is to slip. I decide to call in. "Valerie, I think you're doing a nice job of getting him to express some stuff that he needs to get out," I begin, trying to reassure her. "It's like he's throwing up now, and you need to let him. Try to empathize." I know it's hard to empathize when the therapist feels threatened. Still, being a good therapist means learning how to hold one's own fear and focus on what the client needs at that moment. We have talked about fear in an abstract way in Valerie's supervision, but this is her first experience confronting it in the flesh.

I watch Malik come to life as he screams out his frustration and pain. Although it churns up all kinds of emotions in the rest of us, I can't help but think this is an important experience for him. Unfortunately, Valerie cannot stay with it. She wants what we all want when we feel threatened: control. "Look," she tells him in a tight voice, "you're entitled to feel what you feel, but I'm not going to tolerate you yelling in here." Malik immediately shuts down, although I can see the rage still in his eyes. I worry that, as Valerie lays down the law and becomes the embodiment of all the put-downs and slights that he feels besieged by in a white world, his rage might suddenly shift to her.

Valerie has used her position to do what Malik believes whites always do: tell him to shut up, make him feel small, wrong and frustrated. At the same time, Valerie is now in a bind because the therapy has become a conversation about Malik talking more quietly. With teenagers, it is almost always a mistake to focus on issues of style take the hat off, pull the hood down, pull the pants up, sit up straight, take the headphones off, stop swearing, stop yelling. I have never found it useful to get into these stand-offs.

I call in again and ask Valerie if she is willing to take a one-down position now. Can she admit that she felt overwhelmed by what Malik has been saying, but assure him that therapy is a place where he can express himself in whatever way he needs? She tells Malik, "The team just told me what I was already feeling. I realized I got a little carried away when you were yelling. And yelling at you for yelling didn't help. So let's start over," and she extends her hand to him as if to shake it. "Deal?" Surprised, somewhat reluctant, Malik nevertheless shakes her hand. Then she says, "It seems like your life so far has been about people telling you what you have to do. What is this thing about school?"

There is now a tone of genuine curiosity in Valerie's voice. Malik relaxes for the first time and the session shifts. He talks about feeling singled out and persecuted by his teachers for being black. He feels he hasn't done anything to deserve the treatment he receives. As Valerie listens to him fully, he is finally opening up to this white therapist who has invited him to talk about the ways his white teachers are screwed up.

Once Malik feels Valerie is, in some small way, on his side, she is able to challenge him a little about what he might be doing to contribute to the hostile tug-of-war at school. After Malik describes a confrontation with a teacher, she says, "So when you got up to walk out of the classroom to use the bathroom, and you ignored the teacher when she asked you where you were going, what would have happened if you had just said, 'I'm going to the bathroom?'" As they talk, he defends his position. At times, he tells her, "You don't understand. You can't understand." Maybe this is true, but maybe her questions also sink in and give him some options he can try next time he feels helpless to change his teacher's attitude toward him.

With adolescents, I treat every session as if it is the last, and try to make the greatest amount of impact I can while they are in my office. At the end of this session, I don't know if Malik will come back again. But my guess is he will because he took away some connection to Valerie, some sense that she understood him.

Therapy with teenagers has to be about creating, and then holding, a connection. As a therapist, I am like a spider trying to lure my adolescent clients into a web that will support them. First, I work to spin a strand of connection between us, and when that is established, I focus therapy on strengthening or reconnecting the teenager's bonds to his or her family, school and community. It is when teenagers lose their connection to these sources of support that they are most at risk. Everything in their worlds becomes one-dimensional, and all that matters then is their pain and the relief of it. These cut-off kids become the ones who are capable of staring you in the eye and pulling the trigger with absolutely no remorse, and even some inner thrill.

Adolescence is a time of life when teenagers define who they are by trying on different identities, like trying on shoes and discarding the ones that don't fit. But if you are a black kid in an overwhelmingly white society, you have fewer opportunities to try on different identities or even to define yourself because you are constantly grappling with society's blanket definition of you as, first and foremost, black. Being devalued as a person of color means being drained, every day of personal dignity, respect, validation and one's sense of belonging. Under a barrage of countless, and recurring, negative images and messages about black people, many African-American teenagers find themselves in a trap: how can they forge a positive identity—the developmental task of adolescence—without having a positive racial identity, and how can they cultivate a positive racial identity in a racist society?

Therapists who work with these kids have the task of holding the racial context of the teenager's life in front of them like a pair of glasses, without making race the sole explanation for why people are the way they are. In the case of Malik, his therapist's job is not to assess whether the teacher was picking on him because he is black or because he was simply frustrated by a kid with a bad attitude. The therapist's job is both to support Malik and underscore the legitimacy of his feelings about racism, while also challenging him and holding him accountable for his own actions. While I try to use the context of racism to help African American teenagers understand their situations, verbalize and vent their feelings about its effects on their lives, I also want them to develop inner resources and tools for handling the adversity they face in more useful and productive ways.

Therapy is about healing and also about promoting connection. The healing starts when we lance the wounds our clients bring in, help them vent their pain and rage and let the toxins pour out. Ultimately, the impact of therapy depends on our making a human connection, but to make that happen we must overcome our fears and dive into the process.

This blog is excerpted from "Breathing Room," by Kenneth Hardy. The full version is available in the May/June 1996 issue, Across the Great Divide: Reaching Out to Teenagers in a Troubled Time.