What's In a Kiss?

Helping Couples Decode the Language of Their Sexuality 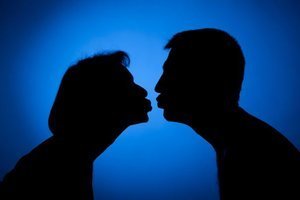 Betty, a designer in a high-powered advertising firm, and Donald, a college professor bucking for tenure, had been married for 15 years. They spent the first 10 minutes in my office invoking the standard litany of our times as an explanation for their lousy sex life—they were both just too busy. Not that this focus precluded blaming each other for their difficulties.

Betty gets home from work so late that we barely see each other anymore, let alone have sex," said Donald resentfully. "We're collaborators in child raising and mortgage paying, but we're hardly lovers anymore. I've taken over a lot of the household chores, but she often doesn't get home until 9 p.m. and most nights, she says she's just 'too tired' for sex."

Betty sighed in exasperation. "Sometimes I think Donald wants me to leap from the front door to the bedroom and take care of him," she said. "But I'm being swallowed up by a sea of obligations—my boss, the kids, the house, the dog, Donald, everybody wants a big chunk of me. Right now, I feel there's nothing left of me for me, let alone for him. He just doesn't get it that I need more time for myself before I'm interested in sex."

I asked them to be specific about how the stress from their very demanding lives revealed itself in bed exactly what happened, and in what order, when they had sex. Several moments of awkward silence and a number of false starts ensued before another, much more intimate, level of their marital landscape revealed itself.

Betty looked hard at Donald, then at me. "The fact of the matter is, he doesn't even know how to kiss me!" she said grimly.

"How would you know? It's been so long since you let me kiss you!" hissed Donald.

When I asked them to describe their foreplay, Betty looked embarrassed and Donald sounded frustrated. "During sex, she turns her face to the side and I end up kissing her cheek. She won't kiss me on the mouth. I think she just wants to get sex over with as fast as possible. Not that we have much sex." Betty shook her head in distaste. "He always just rams his tongue halfway down my throat I feel like I can't breathe. Besides, why would I want to kiss him when I can't even talk to him! We don't communicate at all."

Over the years, I've worked with many couples who complain bitterly that the other kisses or touches, fondles, caresses, strokes the "wrong" way. I used to take these complaints at face value, trying to help the couple solve their problems through various forms of marital bargaining and forbearance listen empathically, give a little to get a little, do something for me and I'll do something for you teach them the finer points of sexual technique and send them home with detailed prescriptions (which they usually didn't follow) until I realized that their sexual dissatisfactions did not stem from ignorance, ineptitude or a "failure to communicate."

On the contrary, "communicating" is exactly what Donald and Betty were already doing very well, only neither much liked the "message" the other was sending. The way this couple kissed each other, indeed their "vocabulary" of foreplay, constituted a very rich and purposeful dialogue, replete with symbolic meanings. Through this finely nuanced, but unmistakable language, both partners expressed their feelings about themselves and each other and negotiated what the entire sexual encounter would be like—the degree and quality of eroticism, connection and intimacy, or their virtual absence.

Knowing that Betty and Donald were most certainly communicating something via their gridlocked sexual styles, I asked them, "Even if you are not talking, what do you think you might actually be 'saying' to each other when you kiss?" After a minute, Donald said resentfully, "She's telling me I'm inadequate, that I'm not a good lover, I can't make her happy and she doesn't want me anyway."

Betty defensively countered, "He's saying he wants me to do everything exactly his way and if I don't just cave in, he'll go ahead and do what he likes, whether I like it or not!" I asked her why she was willing to have intercourse at all if she didn't even want to kiss him. "Because he is such a sullen pain in the ass if I don't have sex," Betty replied without hesitation. "Besides, I like having orgasms."

Rather than "work on their relationship" as if it were some sort of hobby or home-building project, Betty and Donald, like every other couple I have seen, needed to understand that what they did in bed was a remarkably salient and authentic expression of themselves and their feeling for each other. The nuances of their kissing style may have seemed trivial compared to the screaming fights they had about money or the long days of injured silence, but in fact it was an open window into their deepest human experience who they were as people, what they really felt about each other, how much intimacy they were willing to risk with each other and how much growing up they still had to do.

Betty said she used to enjoy sex until she became overinvolved with her job, but I suggested that the case was more likely the reverse that the demands of her job gave her a needed emotional distance from Donald. Her conscious desire to "escape" from Donald stemmed from emotional fusion with him—she found herself invaded by his worries, his anxieties, his insecurities and his needs as if she had contracted a virus from him. 'You may feel that you don't have enough inside you to satisfy his needs and still remain a separate, whole person yourself," I said. 'Your work is a way of keeping some self for yourself, to prevent being absorbed by him. That's the same reason you turn your head away when he tries to kiss you."

I suggested that Donald's problem was a complementary version of the same thing: in order to forestall the conviction that he had no worthwhile self at all, he felt he had to pressure Betty, or anybody he loved, to demonstrate they loved him over and over. Donald, of course, did not see that he was as important to Betty as she was to him, but their mutual need for each other was really a function of two fragile and insecure selves shoring each other up.

Like grains of sand inexorably funneling toward the "narrows" of an hourglass, marriage predictably forces couples into a vortex of emotional struggle, where each dares to hold onto himself or herself in the context of each other, in order to grow tip. At the narrowest, most constricting part of the funnel where alienation, stagnation, infidelity, separation and divorce typically occur, couples can begin not only to find their individual selves, but in the process acquire a far greater capacity for love, passion and intimacy with each other than they ever thought possible.

In order to help them each find a self and each other, I had to redirect their gaze away from their obsession with mutually disappointing sexual behavior, and encourage them to "follow the connection" rediscover or establish some vital physical and emotional link as a first building block to greater intimacy. To consciously "follow the connection," however, requires the full presence and consent of both partners, each purposely slowing down and giving full attention to the other, feeling and experiencing the other's reality. For example, I suggested that Betty and Donald, who couldn't come up with even one way in which they made some sort of vital contact, might simply caress each other's hands and faces while attending to what they were doing and feeling.

The next session, Donald reported that he now understood why Betty felt he was too "rough"; he said the experience made him realize that he usually touched her with about as much care and sensitivity as if he was scouring a frying pan! But slowing down to really become conscious of what he was doing made him experience a sudden jolt of emotional connection with Betty. This awareness was an unnerving sensation for someone who had spent his life performing for other people (including his wife rather than actually being with them.

Betty, too, was shaken by the jarring reality of their connection. She hadn't liked being touched roughly, but the concentration and attention in Donald's hands as he really felt and got to know her body was deeply disturbing; she found herself suddenly and unexpectedly sobbing with grief and deprivation for the warmth and love she'd missed as a child, and that she had both craved and feared in her marriage. Donald managed to keep his own anxiety in check during Betty's unexpected reaction, holding her hand while she cried her eyes out and gradually calmed down on her own. Later that night, they had the best sex they had experienced in a very long time.

Now that they knew what they were looking for, they could tell when it was absent. It was as if each had let slip away a hard, tough carapace, and allowed something tender and vulnerable to emerge. Later, in my office, while Betty gently stroked his arm, Donald teared up as he told me about the new sense of quiet but electric connection he felt with her. "I just had no idea what we were missing; she seemed so precious to me that it almost hurt to touch her," he said, his voice thick with emotion.

This leap in personal development didn't simply occur through behavioral desensitization. Sometimes, Betty and Donald got more anxious as their unresolved issues surfaced in their physical embrace. At times, when Betty dared to shift to a more comfortable position, Donald felt she was squirming to avoid him. It was my job to help them see how this reflected the same emotional dynamics present in other aspects of their marriage. Betty was attempting to "hold onto herself while remaining close to someone she loved, and likewise, Donald was refusing to chase after a loved one to get himself accepted. Insight alone didn't help much; a lot of self-soothing was required. Ultimately, they stopped taking each other's experience and reaction as a reflection on themselves and recognized that two separate realities existed even during their most profound physical union.

There is no way this process can be foreshortened into a technical quick-fix, no matter how infatuated our culture is with speed, efficiency and cost containment. Courage, commitment, a willingness to forgo obvious "solutions," tolerating the anxiety of living without a clear, prewritten script, as well as the patience to take the time to grow up are all necessary conditions, not only for a good marriage, but for a good life. Marriage is a magnificent system, not only for humanizing us, maturing us and teaching us how to love, but also perhaps for bringing us closer to what is divine in our natures.

This blog is excerpted from "Passionate Marriage," by David Schnarch. The full version is available in the September/October 1997 issue, Grown-Up Love: Deepening Connection in a Disconnected World.