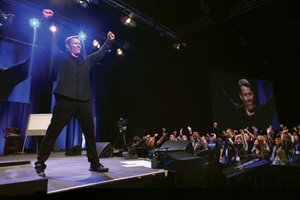 Tony Robbins is up on stage, all 6 foot 7 inches of him. He claps his hands, jabs the air, jogs back and forth, and pumps his fist skyward like a giant boxing with God. “Come on!” he exhorts his audience of 2,500, who've gathered in the ballroom of the Boca Raton Hilton for A Date with Destiny, which is Robbins's signature, six-day personal growth extravaganza. “Come on!” He pauses for a second, gazes out at his audience, and breaks into a titanic grin, looking suddenly like a college kid who's showed up at a really, really amazing party. When he spreads his arms out to welcome the crowd, you're looking at a 7-foot wingspan.

“How're you doing out there, ladies and gentlemen?”

They roar. They stand, clap, jump in the air, shout whoo whoo, and otherwise go crazy on him. He's their rock star.

Tony Robbins, who will give a special session at the 41st annual Networker Symposium next March, is a pop psychology phenom. Over the last four decades, his work in the area of emotional growth and healing has influenced millions of people, most of whom will probably never see the inside of a therapist's office. According to his website, he's reached some 50 million individuals through his recordings, TV appearances, online offerings, and books, at least two of which have made the New York Times bestseller list. Four million people have attended his live seminars. His 2006 TED talk, entitled “Why We Do What We Do,” is the seventh-most watched TED talk ever. He's repeatedly appeared on Oprah's Lifeclass show and has chatted with Larry King, Amos Oz, Ellen DeGeneres, Charlie Rose, Jay Leno, Conan O'Brien, “Morning Joe” Scarborough, and assorted other TV royalty about his tenets of personal change.

And Robbins doesn't appeal only to your average TV junkie. He's served as a “peak performance coach” to the likes of Bill Clinton, Princess Diana, Mikhail Gorbachev, Quincy Jones, Serena Williams, and a whole flock of Fortune 500 execs. He's also met with Nelson Mandela and Mother Teresa (though it's not clear if he had anything to teach those two). He's been interviewed by CNN, CNBC, NPR, The New York Times, The Washington Post, and The Los Angeles Times. The bottom line is that when Tony Robbins talks, a lot of people listen—from a staggering range of backgrounds, expertise, and interests.

Yet many therapists are only generally aware of him. Upon hearing his name, clinicians are apt to say something like “He's that self-help guy, right?” Relatively few are aware of the way Robbins actually works—his beliefs about human possibilities, his specific approaches to healing, and the particular quality of his presence. If you attract thousands of people to each event you give, and keep attracting them multiple times a year, over four decades, it's a good bet that you have something to offer. But what's that elusive “something” that Tony Robbins embodies and transmits to people who seek personal change? And can therapists learn anything useful from it?

At first glance, it's not clear. Robbins claims, after all, that people can transform their lives via his six-day seminar. He sometimes speaks in soundbites. “Biography isn't destiny” is one. “Divorce your story and marry the truth” is another. He likes to wrap his messages in numbered groups: two master skills, three key decisions, four kinds of love, six needs, seven beliefs. Transformation is his brand, and his style is easy to lampoon, or even disparage. In a New York Times review of Tony Robbins: I Am Not Your Guru, a 2016 Netflix documentary, Jeannette Catsoulis wrote that Robbins comes across like “a carefully honed combination of Elmer Gantry, Dr. Phil and David Copperfield.”

At the very least, Robbins's vision is seductive. He promises something that nearly everyone longs for—the capacity to create the life they desire, instead of merely managing the one they have. In a CNN interview, he describes the core intention of his work with people as “finding that source inside of them that's still alive and fanning the flames of that intensity. Give them a taste of who they are, and people start to change.”

It sounds like a worthy goal. But in six days?

For clinicians who toil conscientiously with their clients over a period of months or years, it may be tempting to write Robbins off as more super-salesman than healer, a captivating performer with a taste for fame. But a close look at the documentary I Am Not Your Guru, which covers his Date with Destiny (DWD) seminar, reveals a man who seems to be a bunch of things at once. For example, he's never trained as a therapist (and never claims to be one), yet he integrates several clinical approaches into his retreats, including cognitive behavioral therapy, psychodynamic strategies, Ericksonian principles, Internal Family Systems, Gestalt therapy, positive psychology, and narrative therapy. He cites Milton Erickson and strategic family therapist Cloé Madanes as major influences on his work.

He makes excellent money doing what he does. The DWD seminar costs $4,995 a pop for up to 2,500 participants, and he does high-end executive coaching on the side, prompting Fortune Magazine to dub him the “CEO Whisperer.” He's an outlandishly successful businessman, having owned or partnered in companies as far-flung as asteroid mining, credit cards, nutritional supplements, 3-D printed prosthetic limbs, a 5-star resort in Fiji, and a major-league soccer franchise. He owns six homes, including an oceanfront spread in Palm Beach, Florida, that encompasses a half-size basketball court, an infinity pool, and a bowling alley. The Washington Post estimates his net worth at $480 million. He gives away some of it: in partnership with Feeding America, for example, he's provided 300 million meals to those in need over the last three years, and he's publicly committed to donating a billion meals over the next eight years. Even so, he remains a very, very rich guy.

But here's the complexity. For all his wealth and prominence, it's hard to believe that Tony Robbins is just a guy padding his bank account or celebrity status. When he talks about his mission—to help people identify the emotional forces that hold them back so they can begin to truly thrive—his passion is palpable. And yes, onstage he's big and brash and pumped-up. But once he wades into an audience and begins to talk with an individual, something else emerges. As that person begins to tell his or her story, you can see Robbins slow down. He becomes present. He palpably connects. You could swear he truly cares.

Diving into the Wreck

The Netflix film I Am Not Your Guru offers intriguing glimpses of Robbins's complexity. Director Joe Berlinger, who's previously made hard-nosed investigative films such as Brother's Keeper and Paradise Lost, directed Not Your Guru after taking the DWD seminar himself in 2012. Deeply affected by the experience, he went on to create what feels more like a celebratory concert film than a probing documentary. But if Robbins is a rock star, the film demonstrates that he's a talented and inspirational one—a kind of Bruce Springsteen of the human-potential business, a working-class guy who can reach the masses at a gut level.

On the first morning of the filmed seminar, following his rollicking onstage introduction, Robbins challenges people in the audience to stand up if they want to change something. “What's an area of your life that's not the way you want it?”

On the first morning of the filmed seminar, following his rollicking onstage introduction, Robbins challenges people in the audience to stand up if they want to change something. “What's an area of your life that's not the way you want it?”

A slim young woman named Sienna leaps to her feet. She has long, glossy hair and large, gray-blue eyes. “My diet,” she says, flashing a wide, sweet-girl smile.

Robbins lets the statement hang in the air for a moment. Then, looking at her quizzically, he asks, “Your diet. What about your diet?”

She says she wants to be better to her body. Get healthier. Eat at “the most beneficial times of day.” She goes on like this for a little while, her smile twinkling at odd times. When she finishes, Robbins gazes at her for a moment. Then he asks, “So what are you doing all this for? What's life about?” The other participants listen intently.

Sienna bites her lip. Finally, she admits, “It's about finding love and happiness.” Robbins probes further: what does she have to do to be worthy of receiving love from people? The young woman hesitates again. Then: “I need to be responsible for their happiness.”

Robbins nods. He asks, “Whose love did you most crave growing up, your mother's or your father's?” This question reflects a basic element of his approach. He's big on setting here-and-now goals, but he rarely starts there. He believes that you have to understand the grip of your past before you can actively shape your future. And he's really asking this question of all 2,500 participants, who can see and hear the intervention on huge video screens at either side of the stage. . . .

READ THE REST OF THIS EXCERPT HERE.

This blog is excerpted from "The Tony Robbins Experience," by Marian Sandmaier. The full version is available in the November/December 2017 issue, Our National Blame Game: Can Therapists Help Find a Way Forward?

As a professional coach certified by the ICF I do not believe that Robbins can be called a 'coach'. He seems to have more of a 'Dr. Phil' appeal. Change in any person takes time and continuous practice at changing behaviors. I would be very interested to see data on what is the long term change of those in his audience.