The Silver Lining in Failure

Not Every Teachable Moment Has to Be a Successful One 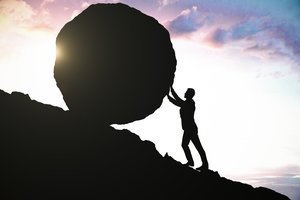 For years, I've gone around saying that I don't like the concept of resistance. Too many therapists blame their failures on a "resistant" patient or a "resistant" family. Of course, everyone who comes to therapy is resistant, otherwise they could solve their problems by listening to the advice of friends and relatives. In fact, they have to come to a therapist precisely because they can't accept good advice. So to say that clients are resistant is the same as saying that they need therapy. The whole art of therapy is to overcome that resistance.

A good friend and well-known therapist called me to refer Bob. He said, "I have this very interesting, very unusual case of agoraphobia for you. It's a man who can't leave the city of L.A. He's wealthy, successful, powerful, but he can't go anywhere. I told him that you're the only therapist in the world who could solve his problem." My friend knows that flattery will get him anywhere with me, but this was a little too much. I had enough sense to ask my friend why he wasn't keeping the case himself, but not enough sense to realize that his answer was ominous: "Bob requires a lot of attention," he said, "and I don't have the time."

I often travel to L.A., so I met Bob on one of those trips. From looking at him, you would never guess that he was successful in a cutthroat, highly competitive business. Skinny, shy, nervous and almost sickly pale, there was a certain vulnerability about him that made him interesting. I thought women would find him attractive. Polite and charming, he was eager to tell me all about himself.

His first panic attack occurred when he went off to college. He had to go home to L.A., but was able to return to school, and the panic did not recur until after he graduated. Good in sports and with lots of girlfriends, he looked back on his college years as the best time in his life. He was somewhat fixated on that time, dressing and behaving much younger than his 40 years of age. Back in L.A. after college, he started his own business and made it a success through a combination of vision and force of character. He also kept up with his childhood friendships and had many loyal friends. But the fear of leaving L.A. returned and he became a prisoner in the city.

His fear about leaving L.A. was that he would get sick and be hospitalized in a strange place. If he was driving out of the city and reached a certain distance away, he would have palpitations and think he was about to die. He was also afraid of getting caught in traffic and not being able to get home. On one occasion, he had tried to take a plane to San Francisco and when the plane was on the runway, he had convinced the pilot to turn back so he could get off. Yet, he said he wasn't afraid of flying, just of leaving L.A. I thought that, as is common with agoraphobics, he was extremely controlling and began to prepare myself mentally for Bob's attempts to control me.

Bob said that, at the moment, even though there was nothing he wanted more in life than to solve the "Leaving L.A." problem, he couldn't really focus on this because he was in the middle of a terrible mess with his ex-girlfriend, Maria, and was trying to get custody of their 7-year-old daughter. Maria drank and had several DWIs. Bob was afraid for the child's safety, yet he still loved Maria and wanted her back. She had pressed charges against him for violence, which he denied ever having committed, and she had gotten a restraining order against him. He had responded by getting a restraining order against her, but they saw each other regularly anyway. This sounded to me like the familiar cycle of the abusive marriage.

During a year and a half, I flew to L.A. three times and had many telephone conversations with Bob and Maria. Bob called me constantly with emergencies that turned out to be just his anxiety. I began by meeting everyone who was involved with Bob: parents, stepparents, Maria, his best friend, other friends. I even had sessions driving around in his car to get a feeling for what his day was like. Every time I felt imposed upon way beyond the call of duty, Bob's angst, his love for his daughter or Maria's vulnerability would appeal to me and I would renew my efforts.

In one moving session, into which I put a great deal of effort, Bob cried for more than an hour as he apologized on his knees to Maria for all the ways in which he had wronged her. He begged her to start a new life with him and promised her all kinds of things. They reconciled, and I thought I was on the way to success. Now I was going to be able to focus on the Leaving L.A. problem. Two weeks later, Bob turned against Maria again, recanting on all his promises. I was enraged. In all my years of practice, I had never had such a reversal before. I was so upset with Bob, I almost forgot my commitment to never use diagnostic categories, especially insulting ones like "Borderline personality."

No matter how I reasoned with Bob, this destructive sequence repeated many times during the course of the therapy. He promised to set up Maria in an apartment, to give her money and a car, to pay her doctors' bills, to pay for the school of her two children from a previous marriage. Each time, he changed his mind, and each time, she drank more. Now Bob has custody of the child and Maria has limited visitation. She continues to drink, and he still can't leave L.A.

Meanwhile, in spite of the constant focus on the relationship problems and on Maria, I made many attempts at various strategies to get him out of L.A. I told Bob that a first step in controlling the symptom would be to deliberately make it worse, so I asked him to restrain himself to a smaller area of L.A. than that which he usually frequented. He refused. I offered to go on trips with him and one of his friends myself. He wouldn't go. I suggested that he organize a trip with a group of friends so he would have an entourage and feel secure. He didn't want to.

In a sense, both Bob and Maria have the same problem of not being able to leave. He can't leave L.A. and she can't leave him. Bob constantly complains that he has done so much for Maria, yet she has no gratitude. And, objectively, one could see that, over the years, he has supported her and helped her with her children. But he does it in a mean way. As his father put it: "It's like a man who, every day, hits his wife on the knees just a little, not very badly. After years, one day, she tries to get up and she can't walk. So he carries her and expects her to be grateful because he's carrying her." In many ways, it's easier for a therapist to work with overt, brutal violence than with this kind of everyday, subtle, insidious demoralization.

I'm supposed to end this article with some brilliant conclusion about the meaning of this case, but I have none. The problem with a failure is that one doesn't really understand why one failed. If one did, it wouldn't have been a failure. It's possible that I wanted to change Bob more than he wanted to change himself. Looking back on our conversations, he was always more interested in talking about Maria than about leaving L.A. I can't believe I wasn't smart enough to overcome Bob's resistance and motivate him to truly want to change. For every problem successfully brought to therapy there is "an offer that can't be refused," or what I call the Godfather Strategy. Milton Erickson used to say that if you make it more painful for the patient to have the symptom than not to have it, the patient will give up the symptom. For example, if a man who suffers from insomnia has to get out of bed and scrub the floors if he awakes in the middle of the night, he will sleep and be cured of the insomnia. Conversely, if the benefit of not having the symptom is much greater than the benefit of having it, the patient will drop the symptom. I wasn't able to set up this type of strategy with Bob, because he wouldn't follow any directive and because he didn't want anything from anyone.

I'm not giving up on Bob. There is one strategy that I haven't used in trying to motivate Bob to follow my directives, and it comes from the work of Erickson, who often used money as a motivator in therapy. For example, he paid obese patients for every pound of weight they lost. Also, I've been thinking about a student I had who made his money in business, but did therapy for free. He explained that this is the ultimate source of power for a therapist. When no one is paying you, the patient will listen to you, because he will feel obligated. To help Bob, I have to be more controlling than he is. So I will talk to him for free, on the condition that he follow my directives, until he's able to leave L.A. I know how difficult it is for him to pay his bills. My generosity will shock him. Is this out of compassion and empathy? No. I love the intellectual challenge of banishing a stubborn symptom, in spite of the patient's efforts to hang on to it.

When I started writing this case, I thought it was a failure. But the process of writing gave me a second wind, and I'm not giving up. I think I can be smarter and more obstinate than Bob.

This blog is excerpted from "The Godfather Strategy," by Cloe Madanes. The full version is available in the November/December 2000 issue, The Enigma of Psychotherapy: How 6 Noted Clinicians Tackled Their Most Challenging Case.

Read more FREE articles like this on Challenging Clients.