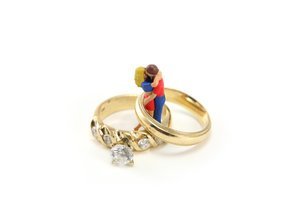 Most of the couples whom we see have little understanding of how commitment really works. Correspondingly, we see the same commitment mistakes being made repeatedly. Of these, two stand out as being the most common and the most troublesome.

The first mistake is that people commit to outcomes (which cannot be controlled) rather than processes (which are always within our control.) The opening line of Epictetus's Art of Living (written 2,000 years ago and considered humankind's first self-help book) says, "The secret of happiness is realizing that some things can be controlled and some cannot." Nowhere is that truth more apparent than in close relationships. To use a familiar example, a traditional wedding vow commits us to "love, honor and obey" the other person "until death do us part." This is an outcome commitment, and is doomed to failure from the start. None of us has any control over whether we will wake up loving and honoring another person on a given morning. Feelings by their very nature are beyond our control. What's within our control is how we deal with our feelings once we discover them. We can ignore them, pay attention to them, speak frankly about them, tighten our shoulders to hide them. Some of these options obviously make for better relationships than others.

The second mistake is a failure to understand a profound truth about commitment: In all times and every way, we are getting exactly what we're committed to getting. Here's why this discovery is both troubling and potentially liberating: All of us have unconscious commitments—hidden from our own view and surrounded by a wall of defenses—which sabotage our conscious commitments. We've found that there is only one quick, foolproof way to find out what we're really committed to, and that is to look at the results we're producing. For example, even if we think we're committed to spending more quality time together, a quick look at the results will tell us whether we're achieving it. If we're not spending more quality time together, we have to admit that we're not actually committed to it. To present a clear example of the principles, we've selected a case in which the work does indeed proceed relatively smoothly. As any experienced therapist knows, however, the snap-finger magic of rapid change is largely in the domain of late-night infomercials, not in the real world of normal office practice. That said, there are ways to speed up the process of change through a deep understanding of commitment. In the following example, there are numerous points at which we ask for commitments of one sort or another. Based on our experience, we believe these moments to be crucial to increasing the speed at which couples make changes.

Maria and Ed have made the journey from Chicago to Santa Barbara to work with us for two days. (About 10 years ago, we shifted our practice from the one-session-per-week model to what we call an intensive model. We work with people in one or two day-long series of sessions. We've found that this intensive format allows us to accomplish in one or two days what used to take months.)

Their surface complaints may have a familiar ring. From Ed's perspective, the problem is very simple: Maria is stingy with sex. Maria hears this with a snort of disgust. From her perspective the problem is emotional distance. Ed rolls his eyes—they've had this conversation many times before.

"When we were first married we made love every day," he says. "Now I'm lucky if it's every other week. That doesn't work for me."

Maria doesn't sympathize with Ed's sexual frustration. "I need more connection with you if I'm going to get turned on. You can't go around emotionally detached all day Saturday, then suddenly get physical with me at bedtime. When we were first together, you seemed interested in me as a person, not just a body."

As therapists, our first task is to find out if they are both committed to solving the problem. Although they've come a long way and paid a considerable fee, we need to hear a clear "yes" before we can get anything meaningful done. People come to couples counseling for many reasons other than to improve their relationships. Some have hidden agendas, such as proving that the marriage is really hopeless, getting professional confirmation that the mate really is a jerk and so on. We ask them blunt questions to find out what their agendas are. Our first question: "Are you willing to do whatever it takes to resolve these issues so you can feel more love flowing between you?"

"We're here, aren't we?" Ed says, a trace of irritation in his voice.

"We hear your irritation," we say, "but please note that you didn't say 'yes.'"

"If you asked a couple if they wanted to buy a house they liked (Ed's a realtor), what would happen if they said, 'We're here, aren't we?'"

He gets the point. Maria's a sharp cookie—she already got the point. Still, she can't resist a barb in Ed's direction.

We invite them to take a few deep breaths, then ask them our original question again.

This time, they both say "yes." That's all we need. It doesn't matter whether they have a dozen murky agendas--practically everybody does. It doesn't matter if they have a ton of resistance and two tons of transference. All that matters is that they go on record with a clear "yes." With a clear commitment to do everything possible to solve the problem, everyone has a firm place to stand.

Our second question: "Would you like to resolve it quickly or slowly?"

Our third and final question: "From past experience, we've found that there's one quick way to solve problems like this. It's very powerful. May we teach it to?"

There's a change in the energy in the room. Although we're talking about heavy issues, the atmosphere is lighter, more charged. Commitment has that effect—it puts a kind of benign electricity in the air.

"I'm not getting enough emotional connection with you," Maria says.

"Okay," we say, "Now we're going to use our most powerful technique to help you solve this problem. Do you still want us to do that?"

"Maybe," we say, "but for sure it would make him a person who was more committed to drinking than to being sober."

He whips his head from side to side. "No, no, no—I'm telling you, I'm committed to having plenty of sex. How could I be committed to not getting enough sex?"

We say, "That's a good question. Let's come back to that. In the meantime, notice that you're avoiding looking Maria in the eye. You're avoiding saying, 'Maria, I'm committed to not having enough sex.'"

"Maria, I'm committed to not having enough sex."

Although his face still looks puzzled and doubtful, we note that his breathing shifts to become deeper and easier.

"Maria, look Ed in the eye and say, 'Ed, I'm committed to not having an emotional connection with you anymore.'"

It's clear that enlightenment has already dawned on Maria.

She nods as she says, "Ed, I'm committed to not having an emotional connection with you anymore."

"Why?" he asks plaintively. Suddenly there's a younger tone in his voice, a kind of innocence he's been covering over with hostility.

Maria has already figured it out; Ed's shaking his head in puzzlement.

We give him a prompt. "Does that remind you of any relationships you saw around you growing up? Were there any people you saw frequently who complained about sexual frustration?"

He barks a sharp, bitter laugh.

"My parents fought about that constantly. I probably heard my old man bitch about his crappy sex life about 500 times a year."

Maria chimes in with a similar observation. "My father and my brothers are all so cool and distant. Good providers, but like there's nobody home inside."

"So," we reflect back, "You learned by osmosis that marriage is supposed to be full of sexual frustration and emotional distance."

"Want to make a commitment to changing that?" we ask.

Deep philosophical questions are raised by this example and the techniques we employ. These questions go to the heart of how intentionality works and what drives us as human beings.

For example: Does this mean that, due to past conditioning, each of us has unconscious commitments that require our partners to do the very things we complain about most bitterly?

Our experience says "yes." For example, an introverted husband we worked with complained about his wife's extroverted nature, only to discover through therapy that he required an extroverted mate to help him excavate and bring forth the long-hidden extroverted part of himself.

Do we enter our intimate relationships with unconscious imperatives that eventually overwhelm our noble conscious intentions? Our experience says "yes." Does this mean that human beings are responsible for creating all the bad things that happen to them? Our answer is a resounding "no."

As therapists, we have a different charter, one which has a genuinely empowering possibility. We can choose to see a world of people who are seeking, often desperately, to take full responsibility for their lives. We are in a unique position to help them do so, if we can help them understand that in every moment of life, they are committed to getting exactly what they're getting. Then, from this place of reclaimed power, they can choose conscious, new commitments that are unfettered by the past and free to act powerfully on the present.

This blog is excerpted from "The Art of Commitment," by Gay Hendricks. The full version is available in the September/October 2001 issue, Turning Points:  Moments of Truth That Transformed 5 Noted Therapists and Their Practices.

Great information!! I find myself thinking people don't know what commitment means anymore! Especially working with younger couples. This is super information to help explain commitment to them. Thank you!