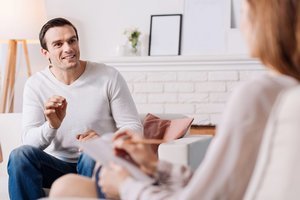 Before it happened to me, I had never heard even my closest colleague talk about falling in love with a client. In our consultation group, the subject was once broached purely theoretically, and everyone became uncomfortably quiet. Nobody shared a personal experience. The message we gave each other was clear: Whatever you do, don't talk about having a crush on a client! And that may be why I would rather write about being seen naked by a client at the health club, or dealing with anti-Semitic remarks in session, than describe to you what happened.

Yet, I want to break our conspiracy of silence so that we can get help when we need it. And believe me, when it came to Scott, I did.

Scott was 34 years old when he was referred to my therapy center by the courts. He had nearly strangled a truck loader who had made a major mistake at his metals manufacturing company, and in previous years, police had been called on three different occasions by girlfriends he'd struck in late-night arguments. He had never been in therapy before he saw me. Unmarried, childless and an amateur jazz musician, he worked hard by day and hung out with famous and creative people at night. He was gorgeous, at least to my taste: tall, well-built and (like many men with a history of violence) charming, intelligent and a champion at forming relationships.

Although I had spent years working with violent offenders like Scott, from the beginning, I wasn't sure I would be a match for him. I was 44, tired, working long hours and steadily gaining weight. My father had just died and my mother was ill. I could still remember when I thought my husband, Dennis, was the most perfect person in the entire universe for me, but we were now slogging through mid-life, staying home on school nights and getting our three kids to school each weekday morning. We hadn't had even a weekend alone together in years, because I felt guilty about the time I spent away from the kids while traveling for work. There were no obvious conflicts between Dennis and me, but things were flat.

In my initial work with Scott, I could see that he was uncomfortable to be in a relationship in which he was not totally in control—a familiar early stage of therapy, when clients and I are working out our power balance. Usually, I quickly get a feel for how to establish a collaborative relationship where I am, nevertheless, in charge. Not with Scott.

I was flirting instead of guiding. Conversing instead of teaching. Worrying about my feelings instead of his. Confused rather than clear and purposeful. Thinking about him outside of sessions. Giddy and confused.

I always dress modestly in pants when I work with offenders, but on Scott's days, I wanted to look hip and stylish and young. I felt like a schoolgirl.

In session, he worked hard to please me and often told me what a fabulous therapist I was. I'd heard it all before, but this time, I did not use a client's compliments as therapeutic material; I simply let them wash over me. He smiled. He left long messages on my voicemail, telling me funny stories, small successes, struggles and new behaviors that would make me proud. I was amused by his stories of life with the rich and famous. I loved participating vicariously in his exciting life, and I was flattered that he kept me emotionally present even when we were apart.

From the outside, our sessions may not have looked much different from hundreds of others I've conducted, but I knew they felt different. Instead of keeping him engaged in the process, I was working hard to keep him engaged in our relationship. I wondered if he was changing at work, treating his employees better and becoming a better human being. He had become my personal project. Singlehandedly, I was going to turn this man around and help him become a mensch, a human being with a good heart and soul. When he said he'd prefer to do his hypnosis lying on the floor--and then asked me to sit on the floor next to him—I said no almost too forcefully, totally flustered.

This was not the Mary Jo I knew.

The worst part was the terrible isolation I felt. I pride myself on being clear during therapy and on top of my game. When I am not, I usually go immediately for help to get me back on track. Not this time. For two months, embarrassed and ashamed, I struggled internally and alone. I didn't tell Dennis, or anyone else.

Finally, from the office late one night, I called my best friend, Linda, a therapist who lives safely 1,000 miles away. She reassured me that what was happening between Scott and me happens to many of our peers. We talked about the fact that the only scenarios we had heard were the horror stories--where crushes turn into affairs followed by personal and professional disaster.

Once I began to talk openly about my feelings, I realized that danger existed only if I behaved unethically. As Jimmy Carter taught us, many of us have lust in our hearts. The danger lies in not understanding the lust and not taking responsibility for how we behave in response to it. I was clear on my marital and professional responsibilities. I was not about to act out my crush.

Nevertheless, I also realized that I had to bring my dirty secret out of the closet, understand it in context and commit to a plan of action. And I couldn't do that just through a phone call with a best friend 1,000 miles away.

And so, I finally brought up my Scott crush in my consultation group. We began to explore my feelings and some of the group pushed me hard to question whether I should terminate and refer him out. "What is he bringing up in you?" they asked. "What's getting stirred?" It soon became clear that Scott had arrived just in time to smack head-on into my own mid-life development crisis.

I felt like a middle-aged, boring mother getting through each day. With his jazz-playing, freedom and fascinating friends, Scott reminded me of my own carefree younger days, when I'd first fallen in love with Dennis (he was my landlord and I'd met him when he came over to install a fire extinguisher). Dennis made me feel special then—he read everything I wrote, told me I was brilliant and came to my speeches. We hiked and lifted weights together, went out for dinner and stayed up talking long into the night. There was no such thing as a school night. Scott had stirred up a longing for those days. He even looked like Dennis.

I told Dennis about what had been going on. We started working out together again and taking walks without the kids. We went away together and spent a wonderful weekend in New Orleans shortly before Mardi Gras, when Dennis flew in to meet me after I'd finished a training.

Meanwhile, my consultation group helped me role-play less flustered responses to Scott's flirtatiousness. They pushed me to ask him whether he was making changes for me or for him?

Over the course of the weeks, I stopped feeling like a deer frozen in the headlights. I began working with Scott with an easier mix of head and heart. Our consultation group also changed: we began taking greater risks with one another and the therapy we did subsequently improved. We commented on the new level of intimacy we had reached together.

And I stopped feeling like a schoolgirl on the day of Scott's sessions.

Scott finished therapy six months later without ever having known about my crush. Two years later, he asked to come in for some brief couples work with his new partner, whom he was thinking of marrying. Given my history, I decided to refer him out; he signed a release and went to a colleague I recommended. A week later, as I was catching her up on his history, I said over the phone, "You will really enjoying working with him. He is very committed and desires to change. Plus he is so adorable."

This blog is excerpted from "The Crush," by Mary Jo Barrett. The full version is available in the March/April 2002 issue, Shhh!: The Ethical Dilemmas No One Talks About

Thank you for writing this article and sharing it with a larger audience of your colleagues. Like many others, I can relate to the feelings and issues you raised. Like you, I stay in contact with a small group of friends/colleagues that I can safely share areas where I feel vulnerable. I appreciate how aware you were of your own reactions and defenses. From this alone I would suspect you to be an excellent therapist. It takes courage to share, and I just want to say "thank you".