Doing Away with the "Blank Slate"

What Happened When One Therapist Decided to Self-Disclose 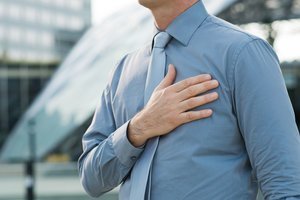 There is a basic inequality built into the therapy contract—we ask clients to disclose their vulnerabilities, while we hide behind a facade of unflappability, presumably floating above ordinary human foibles, untouched by the jolts and discouragements of life. We're not supposed to discuss our personal problems, or even acknowledge having any. While preaching congruence, who among us has never pretended fondness for a client we actually disliked, didn't understand and didn't trust? But on at least two ticklish occasions, with a minimum of strategic deliberation, I opted to step out from behind my own well-cultivated facade of inscrutability to tell clients the unvarnished truth—with surprising results.

The first time came at the end of a particularly long and trying day that had started promisingly enough in the office of a colleague with whom I had spent almost two years working on a book. But that morning, he informed me that after rereading the first three chapters—the part I had considered finished—he had come to the conclusion that the material had to be completely reworked. What was worse, changes in these early sections would affect everything else in our draft. He was talking about another year's work—if it could be done at all. To make matters worse, I could see at once that he was absolutely correct. I was so stunned that once he had finished delivering his verdict, I got up without a word and stalked out of his office. All I could think of doing was tossing the manuscript in the nearest trash can and calling it quits.

Walking home, I found myself spiraling into the kind of depression I hadn't experienced since I broke up with my most alluring high school girlfriend. I avoided my wife, went up to my home office, skipped lunch and didn't talk to anyone for hours.

In the middle of the afternoon, I glanced at the calendar and was dismayed to see that a client was due at any moment. I considered asking my wife to meet her at the door and explain that I had suddenly become violently ill—maybe some sort of food poisoning—and that I would be in touch to reschedule.

Then, for some reason, I felt a sudden impulse to go in a different direction—to simply tell the client the truth about what had happened that day. When Jenny, a perennially frazzled lab technician, came in and sat down, I immediately announced, "Today, I might be the one more in need of help." After describing what had transpired, I admitted that I had considered canceling but thought better of it. However, although I wanted to proceed with the session, I indicated that I was not planning to charge for it. After all, given my mood, I wasn't sure how much of my attention I would be able to muster for the task at hand. "In fact," I said only slightly tongue-in-cheek, "if you expect to use any 'air time,' you had better come up with some damn good problems to talk about."

In retrospect, I should have charged double. We soon became engaged in an energized give-and-take about how setbacks can convulse our lives and how difficult it can be to regain composure, even after the immediate crisis has passed. We both laughed about the ridiculously melodramatic pronouncements we usually uttered in the midst of such emotional distresses and the complexities of saving face later on. As we talked, I felt my own mood lift, but I also saw something emerge in Jenny that I hadn't seen before. She was proud of being able to gracefully yield center stage and empathize with someone else's troubles for a change. She liked the trust implied by my willingness to share my experience with her, and she profited from knowing that none of us is impervious to life's setbacks.

That evening, feeling much better, I called my coauthor, apologized for having "lost it" at our meeting and outlined a plan for digging into the repair work needed on our ailing manuscript. Restored by my time with Jenny and the freedom to acknowledge what had happened to me earlier that day, never again would I underestimate the value of just giving an upset client a safe place to vent.

A few years later, I had a chance to stretch myself even more with a client. Tim was one of the few clients to whom I have taken an almost immediate dislike. Referred by his wife, he carped nonstop about his thankless duties as a foreman in a small carpentry shop and his hassles with his in-laws, who lived just around the corner. His second session was more of the same, and I felt a growing irritation with his self-absorbed whining.

Midway through our third session, I found myself wondering how much longer this could go on. As Tim droned on with his litany of complaints, I became increasingly annoyed and confused. I knew we had gotten off to a shaky start, but I wasn't sure why. I sensed that it was time for decisive action, although I didn't know what. Then, I found myself uttering the following two statements: "Tim, I have two things to tell you," I said. "First, I don't like you. Second, I don't believe anything you have been saying." My words sounded harsher than I had intended, and in the silence that followed, I toyed with the idea of softening the impact with more nuanced words. But before I could recant, he said, "Frankly, I don't like you either. And besides, I think therapy is a complete crock."

"Now, those are the first things you said that I believe," I responded, and I asked him why, in that case, he had come in at all. He explained that his wife thought he needed help for his "temper" problem, and he had promised to give it a try. I told him that his wife's positive experience with therapy was not a sufficient reason for us to continue working together. He seemed relieved to be done with this charade and, frankly, so was I.

As he walked out the door, I was sure that was the end of it. Therefore, I was astonished when he called four months later to ask if he could stop by. He was the last person I had expected to hear from.

Talking to him this time around was like meeting someone new. He was warm and friendly, with none of the wary self-absorption that had once made me so impatient. He freely admitted that he needed help and confessed that—if I would still see him—I was his first choice for the job. We quickly formed a strong therapeutic partnership and worked together efficiently for the remainder of that summer. I grew to like and respect him, and I looked forward to each of our sessions.

Although he made a good living, Tim was a school dropout, while his wife was a college graduate. He told me he felt that his wife's family had never really accepted him, and he was always uncomfortable in their presence. He also felt out of place with his wife's friends, whom he considered stuck-up.

Tim could be quick tempered and judgmental, but I learned that he was also good hearted with a kind of boyish, down-to-earth charm. Through our work together, he lightened up about the reactions of others and less often felt a need to prove himself.

Later, he told me that the only reason he had returned after those initial meetings and was willing to let down his guard was that I had spoken so candidly. "I realized that I could always count on you to tell me the truth," he said. "I hate bullshit," he added, "especially my own!"

These days, I rarely hesitate to share my frank reactions with clients, most of whom, I have come to realize, are far hardier than we were taught to believe. If the setting is right, even brutal honesty can advance the therapeutic cause. In fact, over the years, I have discovered a very handy therapeutic mantra to consider whenever the work bogs down, "When you find yourself stuck, try the truth."

This blog is excerpted from "Tell the Truth" by Jay Efran. The full version is available in the March/April 2002 issue, Shhh!: The Ethical Dilemmas No One Talks About.

Very nice to see a glimpse of how this mentality and action is beneficial in therapy. Thank you