The Emotional Truth Behind Anxiety Symptoms

An Exercise That Gets at the Root of Your Clients' Worries 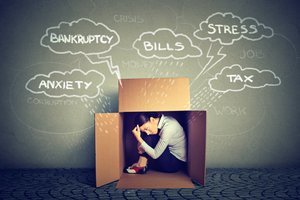 Carmen, a stylish freelance writer, was 35 and happily married, but she experienced intense panic attacks every day or two. "When they started, five years ago, I thought I was having a heart attack," she said. "Before that, I had strong depressions that lasted weeks at a time. Then the panic attacks replaced the depression."

I asked Carmen to walk me through a recent panic episode. She said she'd been in her dining room the previous evening waiting for her husband to arrive home from work. When he was a few minutes late, she began imagining a terrible car crash and went into escalating panic.

In the old days, when psychoanalytic psychotherapy was dominant, Carmen's panic would have been considered a symptom of repressed conflicts, hidden desires, primal dreads, and guilty secrets. Relief required insight into the underlying psychic dramas stoking such terrors. Today, we tend to regard anxiety almost exclusively as a set of behavioral and physical symptoms, sustained usually by irrational beliefs. Treatment protocols require either that the symptom be quashed, often with medications, and the specific beliefs be "exposed" or "corrected" into nonexistence or that reframes and resources be set up to override and avoid symptom production. To focus on the unconscious psychological roots of an individual's anxiety--the hidden system of personal meaning that might be generating it--has become an anachronism.

But how many of us, with a toolbox full of today's methods, reliably bring about a decisive cessation of our clients' intense anxiety and panic? In the first few years of my clinical career, I found that with standard methods I could often help clients mildly relieve their anxieties, but that I rarely achieved a radical reduction of symptoms. At the same time, there were occasional sessions in which I abandoned conventional clinical wisdom and followed my own instincts by tapping into a deep layer of personal meaning in the symptoms. When I did that, I often discovered that clients' symptoms ceased from one session to the next, and never recurred. For several years, my therapy partner and wife, Laurel Hulley, and I systematically examined what was different about those sporadic sessions that yielded such profound change. We wanted to know exactly what elements had made the difference, so that we could achieve such results quickly and predictably with our clients.

What we found was a surprise. Again and again, it turned out that the seemingly out-of-control symptom was actually necessary for some completely cogent purpose harbored by the individual. We rediscovered the once-revolutionary idea that what may appear to be an irrational "disorder" is actually full of personal meaning and deep sense when viewed from the underlying emotional context from which it arises. Our transformative sessions were always those in which the client directly experienced and accepted this previously unrecognized purpose, without having to take any measures to "counteract" the anxiety.

Anxieties and panics understood in this way aren't merely neurobiological dysfunctions linked to irrational beliefs, but arise directly from life-organizing, adaptive constructs formed during specific circumstances in peoples' lives. Symptom coherence is how we refer to the view that there always exists a well-defined, cogent set of personal themes and purposes that necessitate the symptom--which is why the person produces it. At the moment, there no longer exists any purpose requiring the symptom, the person stops producing it. This discovery led to a clinical methodology we call Depth-Oriented Brief Therapy, or DOBT, which is shaped from start to finish by assuming symptom coherence.

For a therapist who can find this inner coherence and utilize it, therapy becomes a process of actively guiding the client experientially into retrieving and then further evolving or dissolving the constructs that have been requiring the symptom. Along the way, many clients encounter strong, deep emotions, but the work is paced so that there's never more affect-laden material than clients can handle at any step.

The methodology of DOBT isn't a one-size-fits-all approach. The symptom's emotional truth is made up of constructs unique to the individual, and to uncover and transform them requires a custom-tailored, experiential process in each session. Furthermore, there are several different ways in which anxiety and panic symptoms are "necessary" to have, as the following examples illustrate.

Panic with a Purpose

"It's so irrational," Carmen said after describing the panic she'd felt when her husband was late.

"It may look that way," I replied, "but let's see how it looks when we've found out what it's really about."

The underlying coherence of Carmen's panic began to surface in our second session. Using a technique we call symptom deprivation, I guided Carmen to reimagine the moments when she noticed her husband was late, but now without any accompanying panic. The goal wasn't to counteract her panic response. Rather, if panic was in some way compellingly necessary, then being without it was likely to yield a consequence so dire that it was worth going into panic to avoid it. "This is an exercise in simply imagining what-if," I explained. "See what it's like for you if he's late and no panic is cropping up. You're at the window, the sky's darkening. Just get a glimpse of what you start to experience as you're waiting, if there's no panic when he's late."

Carmen was silent for a time, and then said, "Well, I know it sounds strange, but I start to feel scared over not having the panic." I asked her what was scary about not having the panic. She said, "It just feels kind of darker, like something bad will happen, but I don't know what or why."

Because the exercise had been fruitful, I assigned a continuation of it as homework. "When you notice you're starting to have a panic attack," I said, "that's now your signal to see, just for a moment, if you can glimpse what you'd experience if you didn't have panic--the same exercise you did here." I wrote down this exercise and gave it to her on an index card, an indispensable tool for maintaining a new awareness and staying on track with between-session tasks.

In the next session, Carmen reported that one evening when her husband was again late and her panic began, she took out the card and did the task. It now was clearer to her why not having a panic attack was scary. "If I don't worry that he'll crash," she told me, "it means I believe nothing bad will ever happen to us--and having that belief will make bad things happen! I really feel that if I panic, if I just suffer, it keeps anything bad from happening."

I prompted her: "Let your next words come from that feeling, and tell me why bad things happen." To her surprise, Carmen then described certain metaphysical rules of suffering that she hadn't known were a powerful subjective reality to her. She felt that her family lived under a weekly quota of suffering, and she could spare her husband an auto crash or some other family disaster by suffering intensely herself, thus meeting the quota. Because she'd always prided herself on being free of any religious beliefs or superstitions, this discovery rattled her sophisticated self-image.

Carmen had become conscious of the emotional truth of the symptom as a direct experience, not just a cognitive insight. She realized she had the ability to whip up a physiological state of panic on the spot, whenever the rules of her unconscious worldview indicated that her suffering was necessary for the safety of loved ones. Carmen's initial thought that panic was something that happened mysteriously to her had been replaced by a clear recognition of her own purposeful agency in producing it.

It would be bad therapy, it seems to me, to attempt merely to "refute" and "correct" Carmen's "irrational" beliefs. This amounts to pitting the client's neocortex against her limbic system--her conventional ideas against her living, emotional knowledge--which isn't at all likely to be effective. Furthermore, it's questionable therapeutic strategy for the therapist to presume to know the "correct" reality for a client to believe.

Accepting the realness of Carmen's world of meaning just as it was, I named the possibilities contained in her newly discovered constructs. "What you've found means there are two ways you could stop having panic attacks. Just as when you switched from depression to panic, you can again switch to a different type of suffering, like eating live worms or standing with your arms straight out for an hour, to keep bad things from happening. Or you could deeply reconsider your beliefs and find whether they remain real to you. Because if they don't, you wouldn't have to keep suffering to keep everyone safe."

Carmen sat quietly for a time and then calmly informed me that the idea of changing her beliefs had no traction whatsoever for her--so the only alternative was to find a different type of suffering. I accepted this and suggested that between sessions she think seriously about what type of suffering she could switch to, and let me know next time.

The following week, Carmen told me she'd had no panic attacks for several days. She hadn't yet settled upon a different suffering to adopt, so I suggested she keep on with that project.

A guiding principle of my work is that once the symptom's emotional truth is found, I stay right there. I kept working with Carmen to get fully in touch with her symptom-requiring worldview, encouraging her to feel it and verbalize it in the most concrete form. By the end of the session, she said, "I really feel that if I think we'll be happy and fine, the universe will smash us in some way. I've got to suffer--by expecting disaster and feeling terrified every day or two--to protect us from that." Another index card carried these words home with her.

In the next session, Carmen reported she'd had no panic attacks at all for two weeks, which was unprecedented. With a bemused look she added sheepishly, "Panic attacks seem silly to me now." She said she'd considered alternate ways to suffer, but still hadn't got one up and running.

Carmen was now in a process of dismantling the basis of her panic attacks--her emotional schema of having control over her family's suffering by suffering herself--despite her earlier statement that this was so real to her that it couldn't be changed. Here we glimpse the operation of another of DOBT's guiding principles: people are able to change a construct they experience having, but aren't able to change one they don't know they have.

Carmen now wanted to see how she'd do on her own. Nine months later, I mailed her a follow-up query. She left me a voice message saying that panic attacks were now very infrequent and she was still working fruitfully on the themes we'd unearthed. She ended with, "I'll call you if I want to speed things along." She didn't.

By heading straight into the core of meaning at the heart of the symptom, therapy becomes a place where a deeper sense of order replaces the apparent senselessness of presenting complaints, and clients awaken to areas of self that have control over what previously seemed utterly out of control. The emotional truth of the symptom is always there, waiting to be discovered and embraced. Searching for it with each new client is always a rich and poignant adventure.

This blog is excerpted from "The Hidden Logic of Anxiety," by Bruce Ecker. The full version is available in the November/December 2003 issue, The New Anxiety: Meeting the Challenge of a Scary World.