What Makes Esther Perel Stand Out? 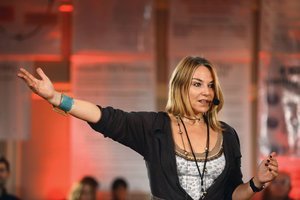 Editor’s Note:The following piece is excerpted from a longer feature article from our September/October 2017 issue. The full version—as well as an up-close interview with Perel—is available here.

Ubiquity is a word that invites exaggeration. After all, how many things really exist everywhere at the same time? Light? Air? Texting-while-walking teenagers? But in the age of modern media, when certain people come along to exert an irresistible pull on the spotlight across platforms, there’s something that might be called cultural ubiquity. Everywhere you look, every magazine you pick up, every time you check your social media, there they are. But how many people outside the realms of politics, entertainment, or the upper reaches of the business world achieve anything like it?

To be sure, in the therapy field, no matter how many conference keynotes you deliver or workshops you give around the world or professional books you write, there’s normally a modest limit to your visibility and media exposure.

And then there’s couples therapist Esther Perel, who in recent years has had as much claim to being the public face of psychotherapy as anyone in our field. Here’s only a partial list of the publications in which Perel and her work have been featured: The New Yorker, The Economist, The New York Times, The Wall Street Journal, Psychology Today, Entertainment Weekly, Vogue, Cosmopolitan, and The Huffington Post, which dubbed her a “sexual genius.”

Beyond print journalism, there are her appearances on NPR’s Wait Wait ... Don’t Tell Me! and This American Life, in which Ira Glass waxed rhapsodic about her skill as an intense listener, and an endless list of television programs, including her bemused and hip turn sitting across from master late-night ironist Stephen Colbert. Perel is also becoming a fixture on the big-idea conference circuit, with appearances at the Aspen Institute, South by Southwest, Gwyneth Paltrow’s GOOP Institute, Google, and of course, the TED stage, probably the most influential platform, on which her two talks have already been viewed by nearly 20 million people.

With the publication of her much-promoted new book, The State of Affairs, and the launch of her Audible original series, Where Should We Begin?, based on interviews with people struggling with the dilemmas of modern couplehood, the drumbeat about Perel is just beginning.

So what is she saying that’s so intriguing to such a growing range of audiences, and what makes her stand out from all the other “relationship experts” that our field produces in such abundance?

From the start, a big part of Perel’s appeal has been how at ease she is bringing the intimate, private conversations couples struggle to have about their sexual connection—or lack of it—to the most public of platforms. At the podium, Perel, whose friends pronounce her first name “Astaire,” seems to embody female sexual wisdom with her exotic-sounding accent and palpable sense of joie de vivre. When she’s on stage, Perel not only takes a trained performer’s delight in being the center of attention, but radiates a genuine empath’s sense of connection with her rapt audiences. Finally, they seem to be thinking, somebody’s put into words what I’ve always been afraid to say myself.

Perel’s most distinctive gift may well be her ability to move so comfortably between the private realm of sexual forbidden desire and the lofty, intellectual domain of reflections on the broader context of history and culture. Her many fans have found this contextualizing of our most private musings both intellectually exciting and emotionally validating. Indeed, her specialty seems to be scaling up the embarrassing relationship frustrations that most of us keep mum about into broader public conversations.

In Perel’s world, it becomes possible to move back and forth between the idiosyncrasies of one’s personal marital tangle and the historical roots of commitment in establishing marriage as a mercantile arrangement not necessarily based on love and fidelity. As she put it during one of her mega-viewed TED talks, in forging more fulfilling bonds in today’s world, we need to recognize that this is the first time in history we’re being asked to experience sexuality not as a means to having 14 children, but as a way to create connection and pleasure rooted in desire.

Perel argues that couples too often don’t acknowledge that the flame of desire requires novelty and open space in which to fully light. If we’re serious about making our emotional bonds with our partners more sexually satisfying, she says, we need to learn how to create the right kind of presence mixed with separateness to keep kindling the shared spark if and when it begins to dim.

Maybe, her work suggests, some of us can benefit from a discussion of our sexual boundaries. Monogamy is a practice, she says, and today it can no longer simply be assumed: it must be negotiated. Just saying, “I catch you and you’re dead” isn’t enough. In her free-thinking and disruptive way, Perel is willing to consider that reenvisioning monogamy might be the new frontier of modern American relationships, even as she’s perfectly willing to accept that, for many people, if not most, more traditional marriage continues to work.

While many find Perel’s perspective on sexuality, eroticism, and long-term commitment liberating, some prominent figures in the wider psychotherapy community have been sharply critical of her work. They point to the paucity of scientific data in her discussions of changing relationship patterns and the lack of theoretical rigor in her clinical approach. Especially worrisome to them is her challenge to the idea that closer emotional connection is what fosters better sex, or as she puts it, “The care, worry, protection, and responsibility that nurture love can, when brought too punctiliously into the bedroom, be antithetical to what ignites desire.”

In response to the notion that even happy couples may cheat, her critics say that these couples may report that their relationships are loving and fine but still not be truly and securely close to one another and hence vulnerable to infidelity. They also counter that when pressed, clients tell them that they hunger for sex because of the closeness and connection it brings them. The way these practitioners aim to get clients to solidify their love and their sex lives is by guiding them to create even greater safety through deeper emotional connection.

Despite what her critics think, she sees her work as a reenvisioning of “eroticism as a quality of aliveness and vibrancy.” She adds, “My goal is not just to make people stay together. I want to make them feel that they have some joy when they wake up in the morning. You know? To not be dead is not the same as to be alive. That’s definitely my own history and what I look at when I talk about the issue.”

Perel is the daughter of two Holocaust survivors, both the only surviving members of their families. When they met, her father had been in 14 labor camps and her mother nine. They came together on the day of liberation, walking on the road away from neighboring camps. Her mother had grown up in an educated Hassidic family with a long lineage of rabbis, while her father was from a tiny village of trade workers. They knew each other’s families from trading before the war, and that inspired an initial trust in the aftermath of the tragic ordeal each had been through. So they kept talking, and wound up marrying each other.

Perel says she and her older brother were her family’s symbols of revival. Her personal intensity and deep investment in weaving together such a large and varied social network around her, she believes, is rooted in the tragedy that formed the background of her upbringing. “I grew up feeling that my life had to be big,” she says, “because in a way we felt we were living life for so many people who didn’t survive. Average wasn’t good enough.”

When she moved to New York, she aimed for the top, signing up to train with famed acting teacher Stella Adler, even while boldly knocking on the door of family therapy pioneer Salvador Minuchin, with no introduction, and asking him to let her observe his work. Unlicensed, with only a degree in expressive arts therapy and brief training as a family therapist, Perel’s persistence wore down the initially reluctant Minuchin. He finally allowed her to stay, on the condition that she remain invisible. “I don’t want to see you and I don’t want to hear you,” he told her. That was until a refugee couple came to him for help and, remembering her multicultural interest, asked her to take them on. It was the start of a working relationship that would last for years. Today, she credits Minuchin with being one of her most important mentors.

While receiving her training as a family therapist and starting a lower Manhattan private practice catering to intercultural couples, she began to initiate dialogues with friends and colleagues that wove together the therapeutic themes she saw in sessions with wider reflections on cultural issues.

It was in these public salons where Perel honed her flair for drawing people into Big Conversations with her ability to articulate questions that spark real dialogue, her willingness to challenge social taboos and speak the unspeakable, and her almost preternatural ability to scan a crowd and get them engaged in a shared exploration of even the most difficult topics. However, the key to Perel’s conversational style is that she’s always interested and has a visceral gift for making people feel that they’re always interesting to her. She not only knows how to get past the noisy racket in our heads to see that our history, race, religion, and culture have shaped how we look at the world, but gets us to be interested in it as well.

Read an up-close Networker interview with Esther Perel here, and the full feature from which this blog was excerpted.

You can also here Perel as a featured speaker and presenter at the 2020 Networker Symposium.