The Power of Play

How to Use a Fast Road to Connection with Children 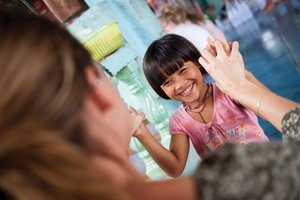 Children need our help. According to the Centers for Disease Control and Prevention, 1 in 7 young children have a diagnosed mental, behavioral, or developmental disorder, and that number goes up to one in five after age nine. Yet despite the fact that they make up nearly a quarter of the population, children are rarely a central part of therapists’ practices. In fact, nearly every state in the nation—43 of them, to be exact—is facing a severe shortage of child mental health practitioners.

If my experience is any indication, most beginning therapists are also offered little to no basic training in clinical work with kids. Why is this? The kinds of interventions that are most effective with children are based in play, and maybe that seems somehow less than professional, not so sophisticated, a little embarrassing. So play therapy gets relegated to a kind of cheerful corner of practice, while purportedly deep and transformative adult-centered talk therapies take up most of the field’s floor.

For me, who’s made a career out of therapeutic play and seen profound clinical results, this is unfortunate. Play is a remarkably powerful therapeutic tool, backed up by cutting-edge research, and teaching families how to apply it at home can bring about profound systemic changes. Because play allows children to relate through something other than the confusing terrain of adult language, and instead engage in a mode of being that they’ve already mastered, family therapists could be more effective if they added it to their repertoires.

One day, the police dropped four-year-old Timmy and his two older brothers off on the agency’s doorstep. They’d just watched their mother bleed to death after being stabbed repeatedly by her boyfriend. When they arrived, the older brothers looked shocked and disoriented, but they could at least nod their heads to questions like “Do you want a drink?” or “Can you come sit here?” Timmy, in contrast, was just a shell of a child, stooped low and on the verge of collapse. He found the first couch in the lobby and balled himself into it like the smallest water bug coiled against a predator. Various people tried to approach him, asking if he could sit up, telling him there was a nice playroom down the hall where there were toys. Timmy stayed in his tight ball. The minutes passed. No one could elicit the slightest response from him. The only indication that he was alive was a shallow rise and fall of his tiny back as he breathed.

That day, our clinical consultant, Sandy, happened to be in the building. Witnessing this distressing scene, Sandy approached Timmy. She crouched down by his side and started singing in a soft, rhythmic way “Timmy, Timmy, you are here today. What did you bring with you? You are here today.” She hummed a few more bars. She said, “Oh, I see you brought your elbow. It’s a fine elbow. I bet it’s a pointy one, like mine. Or maybe it’s soft or squishy. I don’t know. I’m going to check and see.” Sandy reached her hand out and gently cupped Timmy’s elbow. Timmy didn’t budge, but he didn’t recoil either. “Oh!” Sandy whispered with a bit of energy. “It’s pointy. Just like mine!” She continued this way, gently cooing at Timmy, finding ways to connect with him physically, like drawing a shape on his back and seeing if she could feel all five toes within his spider man sneakers. She asked him to wiggle his toes if he had all five of them, and then Timmy wiggled them ever so slightly. Sandy exclaimed quietly but with energy, “You do! You do have five toes in there!”

I saw Timmy’s breathing slow and deepen. After about five minutes, he agreed to sit up, and Sandy offered him a piggyback ride to the playroom, where he could be more comfortable. She told him there were blankets and places to hide there. Climbing on her back, he hid his face in Sandy’s hair as she carried him down the hall, walking a steady, firm pace, humming her Timmy song all the way. Once in the playroom, Timmy accepted a drink and slowly oriented to his new surroundings. All the while, Sandy sat next to him with her hand on his back or cupping her hands around his.

I watched this scene in awe. Sandy had never met Timmy before. How did she know how to reach this little person? How did she have the courage to approach him so closely? And how could Timmy trust a stranger after what he’d just been through? Neuroscientist and trauma researcher Stephen Porges knows.

According to Porges’s polyvagal theory, it was Sandy’s singsongy, rhythmic voice that reassured him, her lack of hesitation to connect with him through touch at the right moment, with the right pacing, her focus on the here-and-now of his physical presence on this earth, her complete confidence in his humanity, and her lack of fear about what had happened to him. That’s what brought Timmy out of his paralysis: nonverbal codes that transmitted the message to his brain, “You’re safe, you’re safe.”

I thought it was magic. I thought Sandy was a magician, and my mind locked onto her like a person possessed. I wanted to be her. But how?

My great fortune was that right in Chicago where I lived was The Theraplay Institute, where Sandy had been trained. Theraplay is based on the attachment work of John Bowlby and two theories promoted by Donald Winnicott: his holding environment—the idea that good parents and therapists can create a nurturing emotional environment for children—and his theory that play is the best way a child can experience her true self.

Theraplay is also derived from intersubjectivity and interpersonal neurobiology research. It emphasizes all the nonverbal elements of Sandy’s engagement with Timmy—behaviors that, in a split second, tell a child that he’s safe: the rhythmic, sing-songy voice; the curious, open face; the smooth, coordinated gestures; the touch and playfulness. I jumped at the opportunity to take the training, and it dramatically enhanced my work and changed my career.

A Fast Road to Connection

It’s commonly acknowledged that many of us became therapists because, as children, we ourselves experienced the pain of feeling isolated, shamed, or mistreated. But if this is true, why do so few of us work in child mental health?

I have a few hypotheses. First, children don’t operate with adult mores. How many times have I walked into a session geared with all my child-development knowledge and had a child reduce me to an angry fool? More than I can count! Why? Because children, like dogs and horses, can sense right away that I have an agenda, and they can run circles around me as I try to cajole, reason, or clown them into cooperating.

Second, working with children can be uncomfortable. It’s the rare child who’ll sit still and talk about feelings. Usually, children don’t know why they do what they do. When a child comes to therapy, you have to be ready to loosen your expectations and sense of control over the session. Children don’t filter their feelings as much as adults. They have temper tantrums, throw things, and tell you that you have bad breath, or that you’re fat or old or ugly or stupid. They force you to get in touch with your most basic impulses. They can easily trigger the feelings of powerlessness and shame you felt as a child, or the feelings of rage you saw on your own parents’ faces.

Last, working with a child is twice as much work for half the pay. In addition to the time it takes to clean up the mess they make in your office, children come with parents. Parents are often needy, angry, and blaming. They email you the ugly chronicles of their horrible weekend, upset you didn’t manage to “fix” their child. They demand you talk to the teacher, the principal, the occupational therapist, and that you do a home visit. They ask for advice and then reject it.

In short, working in child mental health can be a hot mess. But I’ve stayed in this area for nearly two decades because of what I experienced between Timmy and Sandy, and many other dyads like them. Seeing healing connections being made that help children feel safe and seen keeps me coming back, and therapeutic play keeps proving to be the most effective medium to create these connections.

The Power of Play

The quickest and most powerful way to get to transformative moments with children is through play—meaning interactive, face-to-face, reciprocal, cooperative interactions that rely on movement, rhythm, touch, a prosodic voice, and eye contact. I call this primary play because it appeals to the developmentally younger levels of the brain: the brainstem, the diencephalon, and the limbic brain. It doesn’t engage the neocortex, the part of the brain that develops after the second year of life and uses logic, planning, verbal communication, and imagination. Instead, it uses tools that say to a child’s limbic brain, “You’re safe and worthy, and I enjoy connecting with you.”

Embedded in play are moments of connection and surprise, with sudden dynamic shifts. For example, you’re quietly studying a child’s face when he reaches out to touch your nose and you make a resounding BEEEEP sound. The child is suddenly alert. Looking straight into your eyes, he giggles spontaneously at the surprising, funny shared event between the two of you, and you laugh in turn. This element of surprise, so important in play, is the growing edge for a child to learn that new things can happen, and that these new things can be both exciting and safe.

Although it’s been decades since I first watched Sandy, with her sing-songy play and gentle touch, reach out to traumatized Timmy, coiled on the couch like an impenetrable water bug, I can still recall my awe at that experience. Yet there are hundreds of thousands of Timmys in this country alone, and we need to make sure there are enough Sandys among us to help.

Of course, finding your courage to initiate play may take time. So ask yourself: do you feel comfortable jumping into games? If not, why not? Do you worry that you’re not a playful person? Have you had negative experiences in your personal or professional life, where playful interactions have gotten out of control and you haven’t known what to do? Are you wary of parents judging your work as not valuable because you’re “just playing”?

As you explore these questions, find opportunities to look at your face in the mirror and practice widening your eyes as much as you can to show openness and curiosity. Take a deep belly breath. Put some movement in your shoulders, arms, and hands so that they can flow with your overall presentation. Practice your singsongy, rhythmic, storytelling voice. And overall, trust the process of the magic of play. It’ll be worth it!

This blog is excerpted from "Daring to Play," by Dafna Lender. The full version is available in the September/October 2017 issue, The Future of Couplehood: Esther Perel is Expanding the Conversation.