The Challenges of Working with Suicidal Teens

Best Practices for When Work Becomes Dramatic and Unpredictable 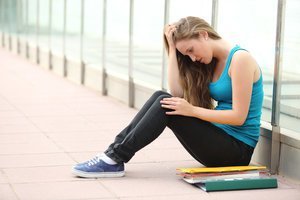 Working with self-harming teens often seems like riding a runaway roller coaster, which keeps threatening to go off the rails altogether. Just as things get smooth and predictable, a crisis sends you hurtling downhill again. Then, after you work slowly and thoughtfully to get back on an even keel, another crisis sends you careening off in new directions. As much as anything, this kind of therapy requires us to recognize that successful interventions will probably not be simple, can't be narrowly focused, and shouldn't depend on a single treatment modality. To succeed, you have to be highly flexible and able to turn on a dime, as the circumstances demand.

Fifteen-year-old Rachel and her mother, Joan, were referred to me by Libby, the high-school social worker, for an emergency family assessment. The immediate reason was that Rachel and two of her friends had pulled up their shirts during geography class to reveal diamond-shaped cuts on their abdomens. Libby was concerned that Rachel appeared depressed, regularly disrupted classes, and was getting poor grades. She suspected Rachel was drinking excessively and using drugs. Libby described Rachel's peer group as very negative: they, too, were cutting themselves regularly, bingeing and purging, and showed signs of substance abuse. In addition, she thought Rachel's boyfriend, Sabir--the group's apparent ringleader—was "disturbed." Life at home was difficult for Rachel. She'd told Libby she couldn't stand her stepfather. She'd had no contact with her biological father since she'd been a toddler. And her maternal grandfather, who'd been like a father to her, had died recently from an alcoholism-related liver disease.

I met Rachel in the dean's office. She was slumped in a chair with her neck bent, sitting across the room from her mother. Tall, of medium build, she was wearing a black shirt with camouflage army pants. Listening to Joan and Libby talk about their concerns, I was surprised that Joan seemed more troubled by her daughter's failing grades and ejection from the classroom than by the fact that she was carving herself up. I could smell alcohol on Joan's breath. After the meeting, Libby told me that Rachel was in a Children-of-Alcoholics' support group. Apparently, a few weeks back, Rachel had told Libby that she thought her mother and her stepfather were alcoholics.

Rachel and Joan agreed to continue meeting with me, and by the end of our second family session, we'd established an initial roadmap for our work together. I'd assessed the family situation, conducted a brief drinking and alcohol history, and suggested several "experiments" for Rachel and her mother to try, including stress-management techniques for Rachel and a calmer parenting approach by Joan.

When I asked Rachel why she and her friends cut diamond-shaped marks on their abdomens, she said, "'Cause it looks so cool. It's like a symbol that shows we all belong to the same crew and all; like the feelings we get when we cut here—it joins us together." I was reminded of how tribal groups around the world have relied for centuries on body modification and markings to serve as a way of identifying themselves as members of a particular tribe. I decided that it would be useful to have Rachel's friends join us in the next session. Rachel agreed to ask them.

At our next meeting, before talking with Rachel and her friends Marjorie, Ellen, and Elise without Joan, I saw the mother and daughter alone to ask them how the week's "experiments" had gone. Rachel was pleased to report that she hadn't cut herself the entire seven days. "How'd you manage that?" I wondered. She answered that whenever she'd felt overwhelmed by agitation and depression and had had the urge to soothe herself by applying her razor, she'd done some mindfulness meditation exercises.

From the moment Joan left the room and I saw Rachel and her "tribe" together, I could see they were a tight-knit group with a high degree of mutual rapport. Marjorie seemed to be the leader: she tended to speak first, was never interrupted, and the others subtly deferred to her. Sabir, Rachel's 16-year-old boyfriend, was the only peer-group member missing. I soon discovered that he'd made the sexual rounds with all of the girls, and was a popular antihero at school because of his daredevil behavior. It was he who'd turned on Rachel and the other girls to cutting themselves and abusing substances, Rachel's earlier denials notwithstanding. All the girls were clearly under his spell. "He's a legend in his own time," sighed Marjorie, to nodded heads all around.

Rachel had been sexually involved with Sabir the longest, and believed he really loved her. Marjorie and Elise were doubtful, cautioning her not to be too vulnerable and end up getting burned. The girls' talk about Sabir—they were clearly all under his spell—showed how hard it would be for me to gain enough leverage with Rachel to steer her away from him.

In concluding this meeting, I asked Rachel's friends if they'd be willing to participate in future sessions, and they agreed. I had confidence that, whatever twists and turns on the ride ahead, I'd made a reasonable alliance with Rachel and her "team."

Over the next several sessions, Rachel continued to apply the techniques we'd discussed to manage her stress, and Joan continued to lighten up with her daughter. Rachel agreed not to cut herself, and her friends agreed to support her in this. In a surprising breakthrough during this period, Joan faced the fact that she had a drinking problem, agreed to total abstinence, and decided to kick her husband out of the house because he was a bad influence on her. It seemed as if the therapy was going well. Rachel was regularly doing her homework and chores, not cutting herself, and staying away from raves. Rachel reported that her friends were being supportive, particularly when Sabir was mean to her. They also were not cutting and doing drugs, at least around her. At a meeting with the dean, Libby, and Rachel's teachers, I learned that Rachel had exhibited a much better attitude at school. I thought we could go three weeks between sessions.

It seemed almost too good to be true—and it was. Within two weeks, Libby called to tell me that Rachel was cutting herself again, bingeing, purging, and not doing her homework. The trigger for the crisis was the one thing I'd failed to prepare her for: sabotage by Sabir. He'd broken up with her and had ordered the girls in the crew to cut off all contact with her. Rachel had no idea why her best friends were giving her the cold shoulder.

When I contacted Rachel, she told me that Marjorie and Elise had already called her to say they were sorry they'd hurt her. Sabir's tactic had seemed extreme to them, even from a legend in his own time, and they'd decided to break ties with him to protect their friendship with Rachel. I asked Rachel to invite Marjorie and Elise to our next family meeting.

So, Joan, Marjorie, Elise, and Rachel attended the next meeting. Ellen remained loyal to Sabir, and was his current sex partner. Rachel still felt wounded by him and shaken by the shunning from her friends. A positive effect of the crisis, however, was that when she'd been unable to talk to her crew, she'd turned to her mother, telling her more than she ever had about what was happening in her life. To Rachel's gratification, her mother didn't criticize or chide her for bad judgment in choosing friends, but energetically and compassionately supported her. I normalized Rachel's backward slides in behavior as well, telling her they could be expected in someone who was making as much overall progress as quickly as she was.

During my time alone with Rachel and her peers, I asked her friends about their experiences of coping with urges to cut themselves, to binge and purge, and abuse alcohol or other substances. I also asked them how they coped with being rejected by Sabir. Marjorie and Elise said they'd been taking yoga classes, writing poetry, and painting. They avoided raves and drug-using friends, and had begun to make new friends outside the crew. They even admitted that they were more willing to talk with their parents, who often responded, much to their surprise, with encouragement, comfort, and helpful suggestions.

I asked the girls—in light of a discussion we'd had about sexism and power—if the diamond-shaped abdomen art might actually serve as a brand of ownership by Sabir. All three were very quiet while they took this in. As they looked back at the ways he'd used and exploited them, they came to agree that he had, in fact, treated them like cattle. Following this discussion, we devised a relapse-prevention plan, in which Rachel could call or schedule impromptu meetings with Marjorie or Elise for support whenever she was feeling emotionally distressed, or after a slip.

A month later, Joan reported that she hadn't had one slip with alcohol. Rachel was doing much better in school, staying on top of her chores, and not arguing with her mother. Rachel proudly said she hadn't cut herself once, had stayed away from alcohol, drugs, and raves, and was no longer engaging in bulimic behavior. She'd even joined her friends in a new yoga class. To help consolidate their gains, I asked them what could possibly make things go backward at this point. They both agreed that the good things might be undone if they started arguing again, if Joan returned to drinking, or if Rachel became involved with Sabir again. They seemed confident that none of these were about to happen.

To reinforce Rachel's gains, I placed her in the expert role and asked her what advice she'd give me to help other young women also struggling with the issues she used to have. "Don't get involved with jerks like Sabir" was her first piece of advice. She also said it was important to stay close to trustworthy friends, get involved in fun activities, and talk to your parents about your problems.

In my roller-coaster ride with Rachel and other self-harming teens like her, I've learned to temper my optimism, live with uncertainty, be therapeutically flexible, and brace myself for sudden spirals, twists, and turns. If you like adventure and suspense, work with self-harming teens may be just the therapeutic specialty for you.

This blog is excerpted from "The Therapeutic Roller Coaster," by Matthew Selekman. The full version is available in the January/February 2004 issue, In the Eye of the Storm: Bessel van der Kolk Has the Trauma Field in an Uproar.

Read more FREE articles like this on Anxiety and Depression and Children and Adolescents.

I requested her buddies approximately their studies of handling urges to reduce themselves, to binge and purge, and abuse alcohol or other substances. I also requested them how they coped with being rejected by means of Sabir. Marjorie and Elise said they'd been taking yoga classes, writing poetry, and portray.

Great job. My only comment is my initial reaction to reducing the sessions with Rachel to tri-weekly. With a teenager who is self cutting I may have been a little more cautious.