The Therapist Who Saved Me

Exploring the Stories I Never Told Anyone 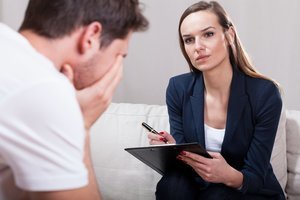 "Close your eyes and try to find that little boy," my therapist, Sara, suggests, gently moving me through my first guided meditation. "Do you see him?"

"Yes," I say, but I don't, not really. I see no one but an anxious man who rarely sleeps anymore, who wakes up at one, two, and three a.m., filled with fear, rage, and unquenchable guilt. I've finally left my wife, who abandoned me years earlier for alcohol. "I'll never divorce you," Maria once hissed. "You'll have to leave me." She was right.

"Approach that little boy. Is he happy to see you?" Sara presses. From the note of quiet urgency in her voice, I know we're approaching catharsis. Should I cry like a guest on Oprah? Or perhaps tremble like a born-again Christian who's finally seen the Light?

But all I can think of are Sara's hands. I've never been attracted to a woman's hands before. Hers are strong, thickly veined, the fingers adorned with turquoise and silver. When she talks and moves her hands, the rings make jeweled contrails across the room. I imagine those hands kneading bread, shaping the clay pots that sit on her shelves, massaging my sagging shoulders. Can she sense my attraction? She appears to be happily married. I'm about to become unmarried. I'm vulnerable and lonely. Concentrate, Lyons!

"The little boy is angry," I tell her. "He feels abandoned and scared."

"Good," she answers. Good? Abandonment is good? No wonder my insurance carrier won't cover this.

As our session draws to a close, I watch Sara write something quickly on her yellow legal pad. "Did this process help you begin to get in touch with your past?" she asks.

My work with Sara began in an uninspiring, windowless, downtown suite that she shared with another therapist. As I sat fidgeting in her reception room, waiting to meet her for the first time, all my naive imaginings about therapists floated before me. I pictured a severe-looking person, perhaps a generation older than me, wearing a no-color business suit and horn-rimmed glasses attached to a chain—a cross between Freud and a '40s-style schoolteacher. Then, a tall, athletic-looking young woman appeared in the doorway, dressed in the colors of a Santa Fe sunset. Was this another client, leaving her session? "Stephen," she said, walking toward me, her smile broad and genuine. "How good to meet you." Her handshake was strong. I felt slightly dizzy, disoriented. Why did I feel like I already knew her?

I spent those first weeks recounting my life with Maria: the spreading contagion of lies, fights, broken promises, false new beginnings. The strangely indelible memories: How, after drinking, her skin took on the smell of iron. But mostly I talked with Sara about my frightening encounter with my own powerlessness. How I'd held Maria's hand and begged her to get help; in response, she'd described her hallucinations: talking toasters, singing irons, dancing skyscrapers. When Maria plunged her hand through our kitchen window, the best I could do was bandage her wrist and rock her to sleep. Then there was the awful night I came home to find her passed out cold, while our 6-year-old daughter played quietly in front of the television. I took our daughter out for grilled cheese sandwiches and fries. "Mom's just tired," I said, but we both knew better.

I'd never told those stories to anyone, ever, because each dismal scene seemed a searing indictment of my abilities as a husband, father, and adult male. My job was clear: to protect those I loved from harm, to keep ugliness from seeping into their lives.

But Sara simply listened, asked questions I'd never asked myself ("Why do you think it's your job to protect people?"), and took the occasional note. Finally, I could stand it no longer. "When," I wanted to know, "are you going to tell me what I did wrong?"

She looked up, setting aside her yellow pad and pen. "You didn't do anything wrong, Stephen," she finally said, her voice soft but authoritative. "Alcoholism is a disease." She talked a bit more about addiction: about its fearsome, insidious power, about the doomed nature of any quest to keep an alcoholic from drinking. "You could never have stopped Maria," Sara said, looking at me intently. "And if you'd stayed, who knows what further harm might have been done to you and your daughter?" She paused, letting me take this in. "You had to cut your losses."

I hadn't cried in a long time. Sara didn't try to stop me.

At our next meeting, she surprised me by saying, "Let's not talk today." Instead, she asked me to draw a family tree, and to look in particular for any links to addiction, depression, or abuse. This sounded as uninspiring and hokey as the guided meditation she'd tried out on me earlier, but I wasn't about to risk offending Sara. "Just draw, don't analyze," she counseled. So, obediently, I sat cross-legged on the floor with the colored pens and butcher's paper she'd provided, and began to draw.

But as my tree trunk sprouted limbs, then branches, memories began to blossom. I saw my drunk grandfather driving my brother and I across the back roads of eastern Iowa, hurtling past cornfields as he chewed on a lit cigar and cursed all the relatives who'd wronged him. Then the face of my great-grandmother appeared, wild-eyed and terrified, as she was dragged out of her wheelchair by her drunken husband, while my grandfather tried to block him with his own body. Then I saw my mother, who, as a young girl, suffered frightening epileptic fits. Her mother was shaking an angry finger at her, telling her that God was punishing her for being a "bad girl."

Looking at family patterns, of course, is standard therapeutic stuff. I know that now. But as a therapy first-timer, creating this family portrait on the floor of Sara's office was a fresh, jolting experience. To think that my family was peopled by so many addicts and other hapless folk—and so many others trying to save them! I was stunned to realize that the blood in my own veins flowed from this tortured, chaotic tribe. I flashed on my own repeated, impotent attempts to pull Maria away from her drinking. "But family isn't destiny," Sara told me. "You can choose another path."

A couple of sessions later, I told Sara that I wanted to continue the guided meditation we'd started all those weeks ago. Back then, the process had seemed silly and theatrical, and at the same time a bit frightening—why dig up all that garbage from the past? But over these last months, she'd shown me that there were places I needed to go—vital, hidden places—that I couldn't get to all by myself. She'd shown me that she was a trustworthy guide.

"Okay, Stephen, close your eyes and travel back to that park in Chicago," Sara said softly. "Who's there?"

"What's the boy trying to tell you?"

"That he feels all alone. Since his parents got divorced, he almost never sees his dad." Then a scene flashed before me, so vividly that it might have been happening that very instant. "My parents are having a terrible argument," I say. "My mother runs out to the porch in a rage and starts to pound her head on the tile floor. My dad finally stops her, leads her to bed. But then he leaves the house." I feel my throat closing. I hadn't thought about this incident for years.

"No," she says quietly. "Not if you want to survive." Sara leans forward, meeting my eyes. "Maria isn't your mother. And you're now a father."

Two weeks later, during a rare night when I'd finally fallen into a deep sleep, I awoke to tapping at the door of the tiny apartment where my daughter and I were temporarily living. I opened the door to the last person I wanted to see at 2 a.m.—Maria.

"Stephen," she said, her voice faltering. "I have pancreatic cancer."

As she stood in the doorway, Maria looked pale and fragile, almost hauntingly vulnerable. And I felt it, bodily: the old urge to swoop down, gather her up, pluck her from the precipice. She needs me. Silently, I willed myself to remember my new life—its calm, its structure, its moments of quiet pleasure. In the next room, I could hear the sounds of my daughter's breathing. She was the one who needed me. She was the one I would protect.

"I don't believe it," said Sara when I called her, distraught, the next morning. Her tone—less like a therapist than some indignant, protective friend—startled me into action. A few phone calls to Maria's friends confirmed Sara's suspicions. Maria wasn't dying. She just wanted me back.

A few weeks later, on a sunny June morning, the phone rang in my kitchen. It was Sara's business partner. Her voice was low and tight. "Sara's husband just died," she said. It had been sudden: a mountain-climbing accident. Oh, Sara.

She disappeared into mourning. For the next month, I met with her colleague, a dispiriting and useless exercise. When we finally met again, I was shocked by her appearance. The radiance of Sara's skin and hair had been eclipsed by the dullness of loss. I still found her beautiful, but she looked drained, emptied out. So this is what grief looks like, I thought, and as I sat there, taking it in, I felt something move inside me, then settle. Looking at Sara in her pain and stillness, I saw clearly, all at once, that she didn't exist to meet some need in me or fulfill some childish fantasy. My role was clear: to simply acknowledge it.

"Thank you, Stephen." Her voice was flat, weighed down. "I don't know how effective I'll be today. But let's give it a try."

Sorrow is part of who we are, I realized. There's no saving each other from it. The best we can do—maybe all we can do—is offer each other a bit of kindness.

The late afternoon sun filled the office, warming the air and turning the walls to gold. Outside, I heard the cheerful sounds of children returning from school. My daughter would be home soon, too. Sara and I watched the long shadows move across the room, and for a moment, I thought perhaps I should say something. But nothing came to mind, nothing very important. We continued to sit across from each other, companionably, in silence. It felt like enough.

Stephen Lyons is the author of Landscape of the Heart ( Washington State University Press) and the forthcoming A View from the Inland Empire(Globe Pequot Press). His writing has appeared in many national publications, including Newsweek, Salon, USA Today, and The Washington Post.

This blog is excerpted from "Breaking the Spell," by Stephen Lyons. The full version is available in the March/April 2004 issue, The Secret Lives of Clients: The Inside Story of What Really Happens in Therapy.

Such a good read. Thank you for sharing.