A Special Story from Our Family Matters Section 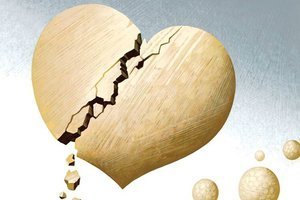 At 2 a.m., a FaceTime ring wakes us up from sleep. It’s Erin, our daughter.

“I know it’s late,” she says on a tiny screen, and before she can say another word, her face collapses and she’s crying into her hands.

My wife and I are on adrenaline-driven alert now, awake enough to say the things that parents everywhere instinctively say in the same tone of voice: “What’s wrong? Oh, Honey. It’s gonna be okay.” We’re propped up against the headboard, huddled close, each of us wishing we could climb through the screen to be with her. She’s utterly distraught, by turns weeping, furious, confused, desperate, blaming herself. Tears run like tiny creeks from her swollen eyes to the corners of her mouth as she sits cross-legged on a narrow bed. “Why is he doing this?” she asks over and over again.

My daughter has a broken heart. She’s 6,000 miles away, across an ocean, on a semester abroad, and she’s stricken. The little pissant she'd been seeing has broken her heart after they'd spent a romantic weekend together in Paris. On returning to their respective cities (he’s also studying abroad), he told her, using a twisted kind of alternative logic, that he missed her so much he needed to break up with her. It immediately transforms him from the good guy we’d met on several occasions to someone eminently hateable, and if he were here right now, I’d . . .

But never mind what I’d do. The real problem is that there’s nothing I can do or say to spare Erin the immense pain she’s feeling. For so many years, a huge part of my life’s mission has been to protect her from precipitous falls and to nurse her through ailments. But Barcelona, where she’s studying, is too many arm’s lengths away to gather her into a hug. I can’t apply a triple antibiotic to the ache in her chest. In the following weeks, as the breakup becomes more solidly real, the time-difference-be-damned FaceTime calls increase in intensity. I keep hoping for signs that she might be feeling some small relief, but if anything, the self-torture gets worse, and it pains me to watch her agonize.

I tell her during some of these conversations that I absolutely know what it feels like to have a fractured heart and what a toll it took, back in the day, on my spirit and on any sense that life was worth living. I know that people all over the world suffer from tragedies far more devastating and traumatic than shattered love affairs. But if you’ve ever had your heart broken by someone you loved and whose love you counted on, you understand the peculiar amalgam of fast-cycling madness, the what-ifs and what-if-nots, that will daily twist your head around until you’re completely wrung out.

I was about the same age as Erin is now when I first had my heart broken. I’d met the love of my life in the kind of touchy-feely college psychology course that flourished in the late ’70s. We’d been thrown together, assigned to interview one another for an entire semester, and in the course of unburdening ourselves, we fell in love. We crammed a marathon of togetherness into the next two semesters, and soon we were envisioning a future that included children and cross-country camping trips. But then, three months before graduation, I spied her on the back of some guy’s motorcycle, and the next thing I knew she was following that guy right—poof!—out of my life.

Crushed isn’t nearly a strong enough word to describe how I felt. More fitting is the old Three Stooges word: murdelized. It was a crime, a sin, and it seemed almost offhandedly arbitrary on her part; I was simply an option she wasn’t choosing anymore. The suddenness of the change in her feelings overthrew me. I no longer knew who I was or what world I was living in, and trying to understand it all was a daily torture, with Erin’s same question—why?—a constant disruptor of my thoughts. I remember feeling so dizzy and sick that I’d fantasize about reaching down my throat and ripping the heart out of my chest for relief.

Then in my early 20’s and perhaps thinking myself recovered, I returned the unfavor for a little while, treating potentially good relationships like bubble gum—to be chewed up, drained of flavor, and discarded. I was a wounded man who’d left his amputated heart behind in college. But that’s no excuse. I knew even then that I was pretending at love, that the superficial connections I was making with women were empty, because I’d emptied them before they had a chance to get real. So I can't help thinking, does Erin’s present trouble spring from my karma? A sins-of-the-father thing? Is her ex simply behaving like the jerk I became once upon a time? When I ask the question, it floods me with remorse; maybe if I’d been more careful with women’s hearts, Erin wouldn’t be suffering right now. But that’s not a thought I can discuss with her.

Once or twice, during our FaceTime chats, I watched Erin clutch and even jab at her chest as she tried to convey her anger and sadness, and I felt my chest fist up right along with her, worried for that particular space inside her, a space I used to feel was filled with a special happiness. Erin has always opened her heart wide to the world. As a toddler, on visits to the playground, she’d let go of my hand as soon as she could and sprint toward the nearest group of play-savvy children. Teammates elected her captain of her junior high soccer team, and one high-school teacher made a point of telling me that on a number of occasions she’d stuck up for a particularly troubled boy when other kids were picking on him. I, on the other hand, was an awkward child, more likely to be the kid picked on than captain of anything, and my awkwardness made me too guarded at times to enjoy what other kids my age had to offer. It kills me that Erin’s enormous heart is what pains her now.

It’d help my state of mind to be able to say that having a broken heart is just an unavoidable part of everyone’s experience. But my wife, her best friend, my mother and mother-in-law, and the best man at my wedding all denied having had the experience. I asked my best woman friend, a woman whose heart I was sure I had broken, and she said no; no man had ever been given the power to break her heart. Apparently, heartbreak is not a universal experience. And given that a sense of brokenheartedness is so close to the surface in me, I can’t help but wonder if, along with bad love-karma, I’ve somehow passed along some terrible predisposition. Is what makes us vulnerable to broken hearts something about openness? Sensitivity? Stupidity? Might there be some bit of DNA or education or emotional inoculation I could’ve passed along to immunize Erin’s heart? Was there a way to raise her so that she’d be impervious to love turned sour?

A week goes by without Erin contacting us. And then there’s a call in which she doesn’t once mention He-Who-Must-Not-Be-Named. We watch, my wife and I, and hope she finds an opening in the clouds. But even as we watch, we watch differently. My wife, Lisa, who’s never had a love affair that eventually led to a broken heart, has confidence Erin’s trouble will pass. But as I slowly work and rework my own memories, I’m not so sure.

And there’s a twist that further defeats any chance I have of understanding all of this: Lisa is the same woman who rode away on the back of another guy’s motorcycle and dealt me my first broken heart. After 15 years of not having seen each other since that fateful day in college, our paths crossed—each of us with dates—at a mutual friend’s wedding, and something unmistakable passed between us. The most joyous moment of my life, hands down, was watching Lisa walk down the aisle as I waited for her at the altar. Soon after, and best of all, we had Erin. But I don’t need to remind any married person that the peaks of joy don’t last forever, nor do they recur with nearly enough frequency. As good as our 23-year marriage has been, it’s been sorely tested a few times, and tested in ways that threatened to rebreak what I thought had been permanently patched. But maybe my vulnerability to a broken heart isn’t necessarily a bad thing. Maybe it says something good about my ability to open myself to loving, even if it sometimes comes with a crash landing into quicksand. If so, how should I feel about my daughter’s broken heart? Is it akin to a baptism, a painful rite of passage? Should I be thanking this young doofus instead of despising him?

During the last few FaceTimes with Erin, she’s more muted. She’s talking about what she wants to do next semester. I can see she’s still hurting, but the pain is quieter. All I can do is watch from a distant shore, hoping that in the course of healing, her heart comes back so completely that I can see it in her smile again, the way I used to. And perhaps it’ll come back even fuller, like the forsythia after it’s trimmed back each spring. If that happens, I’ll know there’s a chance all her pain will have been worth it. But of course, that’s not something I can say to her. For now, I’ll stay tuned in to her calls with a father’s eye and ear, and I’ll keep changing the station when heartsick love songs try to ambush me, fangs bared, from my radio.

This blog is excerpted from "Broken Heart Syndrome," by Gregory Samuels. The full version is available in the July/August 2017 issue, Left to Our Own Devices: Is It Time for Therapists to Be Concerned?

Check out Mark Wolynn's amazing book: It Didn't Start With You.