What Taoist and Zen Meditation Can Teach Us About Anxiety 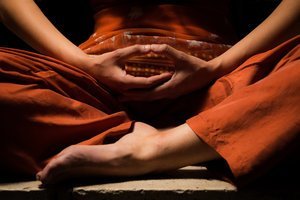 Early one morning, a few months after starting kindergarten, my daughter, Jenna, grabbed some crayons and white paper and snuggled up next to me on our living-room couch. "What should I draw, Daddy?" she asked.

How about a picture of you playing soccer?" I suggested, knowing how excited she was to be starting her first-ever season. The idea appealed to her, so she got to work while I continued typing on my laptop. Before long, she'd rendered a green field, a red and yellow goal, and a uniformed girl looking down at a black ball. "I don't know what else to draw," she said.

"What's the weather like out there on the soccer field?"

"The sun's shining and there are some clouds. Good idea, Daddy!"

"Want to know a cool way to draw clouds?" I asked.

Long pause. Her forehead furrowed. Then, suddenly, her eyes sparkled with delight, registering a predawn dawning. "Yes!" Two clouds appeared in an expanse of blue. An epiphany! She'd grasped the presence of absence: not-being giving rise to being. Her first Taoist revelation, her first taste of what Zen Buddhists call nondualistic thinking—recognizing the necessary connections, rather than the obvious divisions, between seeming opposites.

Centuries ago, Taoist philosophers—Lao Tzu, Chuang Tzu, and others—wrote about the interplay of opposites in the process of change. They viewed polarities as mutually defining expressions of the same whole, recognizing, along with the Buddhists, that those who divide life into discrete, competitive dichotomies—self vs. other, pleasure vs. pain, good vs. bad, life vs. death—end up separated from their own experience and desperate to cast out problems in the pursuit of peace and pleasure.

Jenna discovered that clouds could appear in her picture as a direct result of her not drawing them, that clouds and sky together define a whole that includes them both. I bring this holistic, nondualistic appreciation to my hypnosis and brief-therapy practice, to help clients shift their relationship to problems they typically experience as invading their lives.

Incorporating some basic Taoist and Zen assumptions and practices in our work can dramatically alter how we engage with clients and what we do to make a difference. We can't deliver Enlightenment, but we can help clients experience greater freedom in how they experience and relate to their problem.

Stephanie, a political science professor at a nearby university, came to see me with the hope that I could help her get her anxiety under control. A scholar with an outstanding reputation, she'd begun feeling panicky when faced with speaking engagements, finding herself beset with a dry mouth, a pounding heart, and an urgent need to pee. She'd recently turned down an all-expenses-paid trip to lecture at a meeting in New Zealand, and, much to her dismay and irritation, she'd even found herself feeling shaky while teaching her undergrad and graduate classes. She'd begun to meditate more regularly and had even had two hypnosis sessions with a therapist, all to no avail. The therapist had taught her to cue feelings of deep relaxation by touching her right thumb and index finger, but the strategy failed to combat the panic that gripped her when she went back in the classroom.

Stephanie, who'd been meditating on and off for years, talked about the effort she had to expend to keep her analytic mind in check. I could certainly relate. How many times had I tied myself in knots while trying to stop thinking? If you've done any meditation yourself, you've probably learned the hard way that thinking about not thinking is itself a thought, and that any effort you make to empty your mind only fills it up. In a similar way, whenever Stephanie got anxious, she'd try to convince herself that the sensations were inappropriate, or she'd try to cue relaxation. Instead of feeling better, she'd end up in that same paradoxical place she experienced when meditating: just as thinking about not thinking is itself a thought, feeling anxious about not feeling calm is itself an anxiety. In both activities—meditating and lecturing—Stephanie's conscious mind was working at cross-purposes with her body, dividing her in two.

I started my work with Stephanie by disappointing her. "Unlike your previous therapist," I said, "I won't attempt to use hypnosis to get rid of your anxiety."

"I'd rather thought that was the reason I was coming here," she replied. "Otherwise, what's the point?"

"You're a very sensitive person."

"So it doesn't surprise me," I went on, "that you've failed to block out what you're feeling in these anxiety attacks. You're an expert at noticing stuff, so the alternative to blocking out, which hasn't worked, is tuning in. By noticing and acknowledging whatever your body is feeling, you give it an opportunity to change in ways you don't expect and can't predict."

I began by suggesting that Stephanie play host to whatever sensation or image or thought came into her awareness. A meditation-informed approach welcomes and incorporates distractions emanating from both inside and outside the body, which has the effect of dissolving the boundaries that isolate the Observing-I from internal and external experience.

When clients invite in something they've been trying to shun, the shift in orientation can be enough to effect significant change. But the boundary between the Observing-I and the symptom can be even further diffused by suggesting that they match whatever out-of-their-control experience they're having with an intentional imitation of it.

"Hear the rhythmic beeping of that truck backing up out there on the street?" I asked Stephanie. "If you were to imagine an identical sound, so that it mirrored the one out there in tone, volume, pitch, and timing, then you could hear the beeping in stereo. . . . You can do the same thing with whatever's going on in your head and in your body. Got a persistent thought that won't stop? Feel a tightness in your chest? You can double those up, too. Stereo, sounds, stereo thoughts, stereo sensations: take whatever is happening to you, and match it with a corresponding version that you purposefully produce."

When we intentionally monitor or mimic a spontaneous body process, we end up with the same information or expression on both sides of the mind-body divide, so the boundary separating them becomes less distinct, and the hard and fast (and illusory) borders of the "self" give way. Meditators accomplish this when they "become one with their breath," and people experiencing hypnosis get there as they notice the unfolding of a nonvolitional change, such as when their body becomes numb or their arm levitates "on its own."

As Stephanie accepted and volitionally mimicked the sounds, thoughts, and body feelings she was encountering, she was able, for the first time, to effortlessly enter trance. I began to talk about the various anxiety-provoking sensations that, in the past, would shut down her ability to think. I wanted to open up possibilities for her to respond differently to their initial appearance, to let her know that they could change not only by escalating out of control, but also by turning into something different.

Both Taoists and Zen practitioners embrace change as the primary fact of existence. Holding on to this perspective helps me appreciate that clients aren't "stuck" and thus don't need me to infuse them with motivation. All I need to do is find out how they and their symptoms are already changing and how, in response to our work together, this changing can shift in form or trajectory.

"Emotions aren't called e-motions for nothing," I told Stephanie. "They're always in motion, always transforming. When you first notice a particular feeling or emotion forming in your throat, in your mouth, in your chest, you can find your curiosity grabbing hold, wondering, 'How's this going to change? Is it going to move to a different location? Is the intensity going to increase or decrease? Is the quality of it going to shift in some way?' The fascinating thing about any emotion is that when it's freed up to be itself, damned if it doesn't go ahead and turn into something else."

Stephanie had said that to keep her panic from overtaking her, she'd tried to distance herself from her audience, reminding herself that she was more educated than they were. So in addition to offering up ways she could connect with her internal experience, I also explored how she could connect with the individuals who were listening to her.

"As you're meeting the gaze of this or that person in the audience, as you're tuning in while speaking out, I wonder how the sensations you notice can continue to develop and begin to shift. . . . What happens to your words when you see the lights come on in the eyes of that person over there to the right? How does your passion for your ideas heat up when the person back there starts taking notes?"

Such an orientation, fleshed out over the next couple of sessions, freed Stephanie to look inward and outward, tuning into the movement and interplay of her mind and body while attending to the facial expressions of her audience. Rather than backing away from her developing feelings and sensations, she could embrace them with the expectation of their changing.

We met a total of four times. At the end of our last session, Stephanie promised to keep in touch, but I didn't hear from her for seven months. Finally a cryptic email arrived, explaining that she'd been "testing the waters" and that "all things are fine so far." Ever the critical thinker and appropriately cautious about being deluded by false hope, she'd wanted to make sure that the changes she'd experienced were real and significant. Now that she'd rediscovered her voice and her ability to think in front of students and colleagues, she confirmed that she once again felt free to speak her mind.

It's this feeling of freedom that most directly links the practice of hypnosis and therapy with ancient Taoist and Zen traditions. Of course, inducing a revolutionary overhaul of perspective and experience—"enlightenment"—is way beyond our job description and abilities. Therapists aren't masters, clients aren't initiates, and therapy can't produce a spiritual awakening from the prison of dualistic thinking. But by incorporating nondualistic principles and meditative wisdom in our work, we can help in the liberation of clients who are imprisoned by their problems. Such freedom—perhaps a kind of small "e" enlightenment—lies at the heart of therapeutic change.

This blog is excerpted from "The Tao of Therapy," by Douglas Flemons. The full version is available in the May/June 2004 issue, Enlightenment in the Consulting Room: Opening to the Larger Self.