How to "Build a Bridge" to Sexual Desire 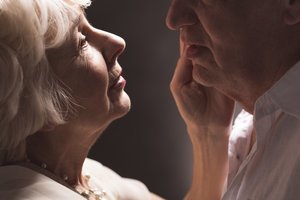 At 52, Alex was worried about the state of his penis. He missed the easy, automatic erections he once had and sometimes was mortified by his inability to be hard enough to engage in intercourse. With every such "failure," he felt his sexual confidence waning. Alex was sold by the Viagra ads on TV and went to his internist, who was more than willing to give him a free sample of pills.

The first three times Alex took Viagra, it worked as promised. "Whew," Alex thought, glad he hadn't raised this touchy issue with Lorraine, his wife of 28 years. He felt he shouldn't have to talk about sex; he'd always been a take-charge kind of guy, who certainly had never had any problems on this issue, thank you very much.

But the fourth time Alex took Viagra, he got an erection and was able to insert, but he promptly began to lose his erection and felt very panicky. Lorraine tried to restimulate him, but Alex pushed her away. This wasn't supposed to happen. How could the "miracle drug" not work for him? It had to be Lorraine's fault.

The Truth About Erections

Adolescent and young-adult men learn that erections are easy, automatic, and most important, autonomous. They can experience desire, arousal, and orgasm without help, or even active cooperation, from their partners. Alex subscribed to the common belief about male sexual performance on demand: "A real man is able to have sex with any woman, any time, any place."

The Viagra media blitz both feeds and amplifies this male performance standard. The blue pill, the ads suggest, will restore to you the automatic, autonomous, rock-hard erections of your twenties. But even for successful Viagra users, 20 to 35 percent of the time, the drug doesn't work. More striking still, the estimated dropout rate for Viagra within a year is between 40 to 80 percent of users. This is caused by unrealistic expectations of returning the man to 100-percent guaranteed erections. Medication cannot be a stand-alone intervention. As with so many one-shot, simplistic solutions to human emotional problems, the promise of cure far exceeds the reality.

The real news behind the Viagra sensation is what it says about men's misunderstanding of their own sexuality as they age. Young men can and often do get erections quite suddenly and unexpectedly, simply when a good-looking body swims into view or a sexual fantasy wafts through their brains. They don't need the stimulus of physical touch to become aroused. Middle-aged men expect the libido of young studs long past the time when their bodies can keep up the pretense.

Contrary to media myths, movies, and male braggadocio, sex is seldom 100-percent successful, especially as men age. The most important fact for our sex-saturated society to accept is that 5 to 15 percent of all sexual experiences among well-functioning couples are dissatisfying or dysfunctional. In other words, contrary to the cultural myth of ecstasy all the time as the norm, almost all happy, sexually fulfilled couples experience lousy sex occasionally.

Unfortunately, men who haven't gotten beyond the equation of sex = erection = intercourse become more vulnerable to sexual dysfunction as they age. Often, like Alex, they're only one or two flagging erections away from feelings of sexual inadequacy. Indeed, for men, the largest factor causing inhibited sexual desire is fear of erectile failure. By a certain age, men need to learn what most women already know: good, satisfying, pleasurable sex, particularly in midlife and beyond, is more a matter of intimate teamwork than of physical hydraulics.

It was at this juncture—post-Viagra failure—that Alex and Lorraine, at Lorraine's insistence, came to see me, a couples therapist with a subspecialty in sex therapy.  As often occurs, Lorraine was more enthusiastic about addressing the sexual problem than Alex. He felt embarrassed, ashamed, and demoralized. In the first session, I normalized both the erectile dysfunction (ED) and his experience with Viagra.

Alex was used to being the expert, not the one seeking help, especially from Lorraine. Yet Lorraine was more than willing to help resolve this problem, as long as Alex didn't blame her for the ED. She enjoyed sex and wanted it to be a part of their lives. She missed not just intercourse, but the whole range of sensual, playful, and erotic experiences that went with it. At the end of this session, I gave them a chapter from Rekindling Desire, which I wrote with my wife, Emily, to reinforce the need for them to work together in the face of a common enemy: inhibited sexual desire and performance anxiety.

After the initial couples session, I see each person for one individual sexual-history session to tell his/her story of their psychological and sexual life. Then we have a couple-feedback session.

From those sessions, I developed a therapeutic plan aimed at revitalizing desire and helping Alex regain confidence in his erections. Alex needed to stop seeing sex as a competitive performance—in which Lorraine's existence and sexual feelings were almost incidental—and begin approaching his wife as his dearest, most intimate, friend, with whom he could share pleasure, eroticism, and arousal.

Alex had always felt that he shouldn't have to have his penis stimulated by Lorraine--his erection should be sufficient unto itself. I told him he'd need to be open to her penile stimulation. Even more potentially alarming for a man who so valued his own sexual self-sufficiency, Alex needed to learn to piggyback his arousal on Lorraine's arousal. Alex began to learn that it was both normal and manly to use the "give-to-get" pleasuring guideline, so that the more responsive and aroused she was, the more aroused he became. This was good news for Lorraine, who'd been afraid to let herself get too aroused for fear Alex would feel even more pressured to perform. I pointed out that a woman's arousal can be a major aphrodisiac for the man. The key to achieving change was Alex's willingness to try new ways of thinking about and experiencing sexuality, and Lorraine's enthusiasm for renewed intimacy and eroticism.

I asked Alex to tell Lorraine the emotional, physical, sexual, and interpersonal factors he found most attractive about her. Then he was to make one to three requests—not demands—that would make her more attractive to him. The next day, they were to switch roles, and Lorraine would do the same with Alex.

An important component in sex therapy is helping couples do what I call "building bridges to sexual desire--his, hers, and theirs." Bridges to desire means discovering individual cues, places, and scenarios that are sexually inviting for one or both partners. Alex was so used to the idea that the signal that he wanted sex was his erection that the concept of planning sexual dates or consciously inviting sexual encounters was foreign to him. Lorraine took the lead in setting the mood to be sexual. She compared making a sexual date to preparing to attend a play you really want to see: you plan for it, you set aside time to do it, you look forward to it, and, chances are, you enjoy actually doing it.

One of Lorraine's favorite "bridges to desire" was to shower with Alex and have a lit, scented candle in their bedroom. Alex's favorite bridge to desire was cuddling on the couch and becoming more and more turned on before moving into the bedroom. The bridge to desire they both enjoyed the most was a weekend away, especially to a romantic B&B with access to hiking trails. The different environment was a major desire cue for Alex. He liked variety and new challenges in other aspects of his life, and came to understand that was true sexually as well.

Now Alex was beginning to gain a more realistic sense of middle-aged sexual expectations. In one of our last sessions, Alex announced proudly that, a few nights previously, they'd not been able to finish intercourse but, for the first time in his life, he felt okay about it. He comfortably laughed it off and went to sleep cradling Lorraine in his arms. He and Lorraine were enjoying a broader sexual repertoire, and he valued a richer, deeper sexuality, even if it didn't always lead to intercourse.

This isn't to say that medical interventions to facilitate erections and intercourse shouldn't be used. There are times when men are so anxious that they can't relax, even with coaching. Until the process of allowing their erections to wax and wane comes more naturally, Viagra can be used and integrated with pleasuring exercises as a backup resource. But these medications will only work—in the sense of contributing to a richer, more satisfying sex life—if a man values sharing intimacy and eroticism in both intercourse and nonintercourse sexuality.

The man who has a more spacious, healthy understanding of sex knows that it involves two people, not two sets of sex organs (with his clearly the most important). Sexuality is as varied as human interaction in general, encompassing many daily, intimate moments of tenderness, sensuality, pleasure, and mutual teamwork with a beloved mate and friend, not just the culminating drama of intercourse. Real-life, adult sex isn't a kid's game—it can be really well played only by men who've gained some wisdom and experience about the world and themselves, even if their penises are no longer the envy of the locker room.

This blog is excerpted from "Beyond Viagra," by Barry McCarthy. The full version is available in the May/June 2004 issue, Enlightenment in the Consulting Room: Opening to the Larger Self.

From this article I would assume that only straight men and men in relationships are effected by ED. Thoughts on working with gay male couples or men not in relationships would be of benefit. The article reminded me of a Viagra commercial as they only advertise to the man who can again satisfy his wife.