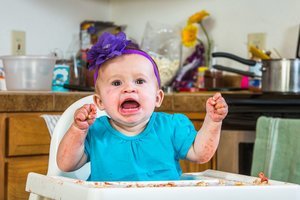 One morning 25 years ago, as I was out walking my newborn son, I was stopped by a woman who insisted on fussing and fawning over him. I was irritable and exhausted from yet another night of interrupted sleep, but, for a few moments, I was as proud and pleased as any new mother. Then she asked if Ryan was a "good" baby. Already I knew the definition of such a baby--an infant who's generally content, easily soothed, and sleeps a lot, especially at night. I don't remember my reply. I only remember my heartsick awareness that my son had none of the characteristics of a "good" baby.

Child-development books claim that newborns spend most of their time sleeping. My newborn didn't. Fretfully awake much of the time, he was easily upset and hard to soothe. It wasn't unusual for him to cry as I put him into his car seat, and to continue crying throughout an entire ride, debunking the notion that car rides calm fussy babies. Anything, it seemed, could upset Ryan--dressing or undressing him, getting him in and out of the bath, changing a wet or soiled diaper, attending to him or letting him be. He cried before going to sleep, sometimes inconsolably. Holding him, nursing him, rocking him, or walking him often didn't help.

Ryan was physically healthy. He never had so much as a cold during his first year, and he was advanced in motor development. Yet when his first birthday came and went and life with him was as difficult as ever, I felt a sobering dread at the prospect of year upon year much like the one I'd just endured. I felt a growing sense of incompetence as a mother. A common assumption, then and now, is that all infants are born equally receptive and responsive to the influence of their caregivers, particularly their mothers. Implicit in this idea is another, more libelous, assumption: a baby's level of contentment, feeding habits, and sleep patterns reflect maternal skill, or lack thereof. Behind a difficult baby is, perhaps, a mother who hasn't "bonded well," or whose depression and anxiety are affecting her child.

The books I read and other mothers I met were full of contradictory advice about what might ensure a happy, well-adjusted, settled baby. "Take your baby everywhere with you and he/she will get used to travel." "All you have to do to get your baby to sleep through the night is let him sleep in your bed." "Make sure she stays in her own crib and never sleeps in your bed." I tried a variety of approaches, to no avail. A mother who "tried hard" and still had no success must be unconsciously communicating hostility or insecurity to her child, the common reasoning went. If Ryan continued to be a challenging child, there was clearly nobody to blame but his mother.

Finally, I saw a therapist. For several months, I talked a great deal about life with Ryan. My therapist kept steering the conversation to my childhood "issues" and tried to connect them to my current unhappiness. She seemed to believe that depression was at the root of my troubles as a mother. But what if my troubles as a mother were themselves causing my depression? Incredibly, we never addressed this possibility. Nor did she have any practical suggestions about how I might improve things for Ryan and me. Fortunately, we were about to reach a turning point in our understanding of Ryan.

The year Ryan turned 2, I started graduate school in clinical counseling. Keenly sensitive to the feel of his clothing, and resistant to each transition, Ryan often had loud, prolonged tantrums as we got ready to leave the house each morning. By the time I picked up the friend who rode with me, I was close to tears myself. My friend suggested I look into the research of Stella Chess and Alexander Thomas, pioneering husband-and-wife psychiatrists who'd initiated a study of children's temperament when their psychoanalytical backgrounds had failed to account for the differences and difficulties they'd seen in children's behaviors.

Chess and Thomas were psychiatry professors at New York Medical Center. Launching what would be a 30-year longitudinal study of children and parents in 1956, they were among the first to describe the role that inborn temperament plays in accounting for children's behavioral styles. In their groundbreaking work, they brushed away decades of environmentalism, which had rigidly held that babies were born "blank slates," their growth and development dependent entirely on the quality of their parenting. In their view, infants weren't born empty vessels, but came into the world exhibiting remarkably different hereditary differences in how they responded to the environment. Furthermore, argued Chess and Thomas, what often struck parents and professionals alike as unusual, difficult, or even abnormal behavior might instead be perfectly natural and benign variations in innate temperamental makeup.

I think it was Behavioral Individuality in Early Childhood by Chess and Thomas that I read first, sitting in the college library. What a revelation! I'd never heard of temperament, yet here was an impressive body of scientific research that dealt with normal children of normal parents who acted just like Ryan! And thank goodness for my friend. In the entire course of my graduate training, temperament was never mentioned.

It was deeply reassuring to read in Chess and Thomas that Ryan fit the temperamental profile of a child born with low adaptability: he had a hard time adapting to and tolerating even ordinary daily transitions, such as waking and sleeping or being dressed and undressed, which accounted for our difficult mornings. According to Chess and Thomas, he was also a highly sensitive baby, demonstrated by his reactivity to the feel of clothing and how easily he became overstimulated and overwrought.

There was almost no practical advice in Chess and Thomas's publications about how to handle a temperamentally extreme child, and reading their work didn't make Ryan easier to handle. What they had to say was so comforting and empowering, though, that I could begin to relax and respond to him with more understanding and far less anxiety and self-blame. I was able to respond more neutrally to

Ryan, since his behavior no longer took on potentially loaded meanings. He was coping as well as he could. My job wasn't to make him a different person, but to find ways to help each of us improve our coping skills. And with our worries eased, my husband and I occasionally found a lifesaving sense of humor about our parenting challenges.

Having an awareness of temperament has helped me as a therapist to be curious, rather than judgmental or prematurely diagnostic. I have a much broader tolerance and understanding of a wider range of normal, if unusual, behaviors in children.

While the concerns of parents of temperamentally extreme children have often been dismissed or minimized, I've seen many families hurt when teachers, doctors, and therapists have overreacted to a child's unusual behavior. When parents and therapists don't know the child and are unfamiliar with his or her particular behavior, it can lead to assuming pathology in the child when no pathology exists. When toileting problems, biting, major tantrums, school refusal, and other serious behavioral concerns in children come to my attention, I don't automatically assume there's a serious disorder in the child or family. It isn't, of course, appropriate to assume that all unusual behavior in children is normal. Several temperament dimensions defined by Chess and Thomas helped me understand my son and figure out strategies for dealing with his temperament. What follows is a summary of these dimensions.

Activity measures the amount of physical energy a child puts into behavior and daily activities. A very active infant moves around a lot, even when sleeping. Highly energetic children often prefer more active kinds of play--large-motor activities and outdoor exercise--over quiet, indoor pursuits. Even when they engage in presumably quieter occupations, they often do them in an active way. They fall off their chairs while playing a board game, twirl about or fidget when reading, get up repeatedly and walk around the room while doing homework.

Intensity refers to the level of energy a child puts into self-expression; it's a measure of a child's volume and drama. Intense children express all their emotions with vigor and gusto. They may talk and sing, laugh, and fly into rages with equal abandon. They tend to speak in extremes: they had the "best" day of their lives or the "worst"; you're "the most wonderful mother in the world" or the meanest and rottenest. These children are delightfully enthusiastic when they're in a good mood; a negative reaction, however, often in response to seemingly minor daily events, may induce a righteous tantrum, startling mouthiness, or threats to run away, kill someone, or kill themselves.

Because parents and teachers naturally find these expressions alarming, they may fear these children have deep-seated anger issues, suffer from depression or abuse, or are on the road to juvenile delinquency. When these children have frequent negative outbursts, they're often referred to therapists. Of course, this kind of behavior must always be carefully assessed to be certain the child isn't dangerous to himself or others, and isn't being put in danger by home circumstances. But often it's their temperament speaking, not any pathology.

Persistence, or Frustration Tolerance measures a child's ability to complete a task in the face of obstacles. Children who are low in frustration tolerance tend to give up easily when faced with a challenge, such as trying to reach a toy, build with LEGOs, dress a doll, tie a shoe, or learn a new task.

Children who are low in frustration tolerance can be helped to increase their persistence by gradually stretching out the adult response time to their demands for help and, for older children, by breaking tasks down into smaller pieces, so they're less likely to be overwhelmed. Parents can set the timer repeatedly during cleanup time, telling their child to pick up only the blocks during the first five minutes, only the books during the next five, and so on.

The great value in the temperament perspective of Chess and Thomas is in how widely applicable and useful it is. It gives parents and therapists a neutral framework for analyzing and dealing with difficult children. Taking temperament into account empowers parents by adjusting and enlarging their perceptions of who their children are, and helps them respond to children in ways that are a good fit for their individual personal styles. It allows all infants to be "good" babies without blaming mothers (or fathers) for implied "bad" babies, who happen to be temperamentally challenging.

A temperament approach isn't a panacea. Learning about temperament doesn't transform temperamentally challenging children into easygoing boys and girls. We had tough times with Ryan all the way through high school. But knowing about temperament helped us understand and parent him better, and over the years, we noticed an important shift--the hard times weren't so hard, nor did they last as long.

There's no "cure" for temperament, nor should we want such a cure. As therapists, we can help families make sense of their personal experience, even when it doesn't match preconceived ideas of how things should be. Our society has become increasingly intolerant of behavior that strays beyond familiar norms, and too inclined to diagnose, pathologize, and medicate what are simply temperamental differences. Our field needs to help parents recognize the variability, richness, and sheer capaciousness of the hard-to-define category we call normal.

This blog is excerpted from "Beloved Stranger" by Alice Shannon. The full version is available in the May/June 2005 issue, Whatever Happened to Family Therapy?: The '70s Revolution Goes Mainstream.

Read more FREE articles like this on Children/Adolescents and Parenting.