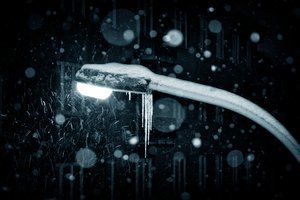 When I was about 10 years old, I climbed into the cab of my father's truck to join him for an evening of snowplowing. A storm had transformed a Sunday into a no-school night and lengthened my weekend visit with him. I basked in the warm blast of the heater and the rare opportunity to be alone with a man I didn't know well, yet loved anyway.

My father was a quiet man and I'd been raised to be quiet, too. From quick, sideways glances at him, I noticed how the light of the dashboard cast an eerie, green glow upon his unshaven profile. He resembled the bronze statues I'd seen on museum field trips, figures forever captured in their private thoughts. They were stoic, brave, enigmatic men with secret missions and dreams about which an onlooker could only speculate. Large white flakes hurtled toward the windshield like comets as we drove toward the driveways and parking lots he'd been hired to clear.

Throughout the night, we fought the storm, scraping away the snow, only to see it pile up again. As soon as he cleared all of the properties, he immediately circled around to plow them again. It was a job that appeared to have no end, yet somehow it did. I fell asleep at some point in the evening, but awakened as the truck came to a halt outside of the local coffee shop. I watched my father as he walked in, his flannel shirt rumpled and his normally bouncy gait subdued by fatigue. Several moments later, he shouldered open the foggy door of the shop and headed back toward the truck, balancing a large cup of coffee in one hand and a small bag in another. Once in the truck, he passed me the bag and I fished out a grape jelly doughnut that I ate as we drove on.

The storm had subsided and the sun was just starting to break over the horizon as we drove toward home. I watched the dawn extinguish the streetlights while the windows of houses and apartments burst into illumination. The world was waking up and my father would soon drop me off with my mother. I remember eating slowly—trying to postpone the end of that doughnut and our ride together. I know now that at the time of that ride we were both struggling to adjust to the recent divorce. My mother had left my father only a few short months before, and our weekend visits were still awkwardly new.

Decades later at work, I recall that snowplow ride. I'm sitting across from a human blizzard of a woman—someone barely two steps away from the needle and drugs that have buried her family alive. Someone who just had all three of her children taken away because of her drug use. She's crying so hard she's keening. I find it difficult to breathe in the presence of her grief and the weighty knowledge of all the work that'll need to be done. She wants her children back, and we both know what that'll mean: court dates, the dogged scrutiny of Children's Services, and a multitude of clean drug screens. Then, when the children are finally returned, they'll be angry and hurt—consuming what little energy she'll have left after scraping and clawing her way through the obstacles that have separated them.

We meet in the only available private space for me to talk with my homeless outreach clients—the storage area at a local soup kitchen. We sit together in a room crammed with donated toiletries, surrounded by shelves of toilet paper, paper towels, and cardboard boxes of shampoo samples. The air in the room is warm and oppressive. Drops of sweat cascade down her forehead and blend with her tears. No words seem adequate at this time, so I make myself useful by yanking down a roll of toilet paper and ripping off its wrapper. I unwind a long string of squares and pass it to her. She takes the first bunch and blows her nose into it. I unwind more and she uses the next batch to wipe her face. My shirt clings to my sweat-drenched back.

Somehow the image of that snowy night with my father haunts me. Amidst the humidity and heat, I'm obsessed with thoughts of snow—its relentless fall, the way it piled up on the asphalt, the scrape and drag of the plow. After all these years, why is this memory resurfacing now? Was it the cleaving of this woman's family that called up the memory of a time when my own family started to crack? Was it about how divorce, despair, and addiction had splintered us into pieces that could never be returned to the original whole? Or is it a memory of a turning point in my life as I sit with someone who may be at one of her own? Suddenly I realize what prompted this recollection. It's none of the above.

I realize that the memory of that night with my father is about how one gets an impossible task done. It's about the comfort of having a companion at your side for part of the ride, even when nothing helpful can be said. My client's grief calls up a memory that reminds me that anything I help her clear away today will surely make tomorrow's task easier. I sit with her and unravel more toilet paper as she continues to cry. I briefly close my eyes and recall the sweet taste of powdered sugar and grape jelly, the sound of my father's contented sigh when he'd completed his task and turned the truck toward home, and the way the rising sun tossed a golden glow upon the piles of snow.

I open my eyes and bring my attention back to my client, who's stopped crying and seems calmer. I lean toward her and ask if she'd like a ride to detox. It's time for us to start digging her out.

This blog is excerpted from "Plowing: The Art of Facing an Impossible Task," by Hope Payson. The full version is available in the March/April 2007 issue, The Networker 25th Anniversary Issue: Featuring the 10 Most Influential Therapists.

This is really a great articles about A Social Worker Finds Inspiration in a Father-Daughter Memory and i hope this articles will helps more people.