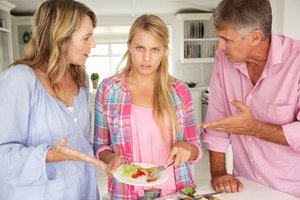 Adolescents bring their own brand of headaches to their families. Using a personal arithmetic, they know they're two or three years older than their parents think they are, and they demand a relaxation of the rules before they know what to do with the autonomy they insist on. The parents are caught. They've "been there," but that was a different time. They'd like to share their wisdom to protect their adolescent from the uncertainties of life, but find themselves with a child they don't recognize. Since they're uncertain about how to protect their child, they increase control, while the adolescent, certain that this is unfair, tests the rules. A therapist who enters this minefield needs to empathize with both camps, working both sides of the street, like any competent professional, in the search for better pathways.

When they enter the room and settle down, Mary takes the lead, telling me that her daughter "has lied to us as long as I can remember." This is clearly impossible, but it isn't the logic of the statement that's the problem, but the intensity of the assertion: "as long as I can remember." The family's interaction has been restricted by a story that started at the beginning of time.

Opening Up the Presenting Complaint

Richard then takes up the story: "We don't know why. We thought we could fix it ourselves, but it's gotten worse."

Most families define their problems like this—in a way that invites the therapist to join them in the trap of their fixed perspective. If I join with the parents, I may lose Whitney, and I certainly can't join with their narrow definition of their daughter and themselves.

I ask the parents' permission to talk with her for a while, and I start by saying that I'm curious about her life. We talk about her school, her friends, her interests. She tells me that she keeps a diary, that she likes poetry, and that she writes poems but doesn't show them to anybody. I ask her if she knows what a metaphor is. We agree that a metaphor can bring something to attention by calling it by a different name. I say that, in effect, a metaphor is a poetic lie.

I'm pleased with this image. It transforms a symptom into a skill, and I'm pretty sure it appeals to Whitney, who's bright, engages with me easily, and, like any young person, would like me to understand that she's more than just a liar. I know that the parents probably feel I've been seduced by Whitney, however, and have fallen for her lying.

I turn to Whitney and say, "Can you help me to understand what your parents are saying?"

"Can you give me an example?"

Her father chimes in: "A week ago, she was grounded because of her poor grades and wasn't allowed to use the phone. But I know for a fact she did use the phone."

"How did you know?" I query. "How did you become a detective? By the way, who is a better detective, you or Mary?"

Mary responds to my question about which parent is a better detective with more evidence of Whitney's mysterious illness of lying. "We're more on top of things now. We pay more attention. Her choice of friends isn't always good, and we're more careful about who she's with. The other day she said she went to visit a friend, but I found her in the mall with a boy."

"I'm concerned about you," I say. "Trying to follow an adolescent child can become a full-time occupation. Are you both equally worried? Or is one of you more worried than the other?"

"She gets caught up in it more," admits Richard.

"It depends on the situation," says his wife.

I've been trying to separate the story from the storyteller. The parents appear united in their view of Whitney's behavior, but that's rarely the case. Now the father's comment suggests that he's ready to depart from the appearance of a united front.

"Why do you think that happens?" I ask. "What does Mary want from Whitney?"

"She wants her to be truthful. They used to be very close," he replies.

When family members say "very close" they usually mean harmonious, but to a therapist the terminology suggests enmeshment: a closeness that can be hard to sustain when children become adolescents and want to become their own people.

"So lying can be a defense," I say to Mary. "At this point, you and your daughter are hooked together. She's pulling at you so you'll watch her continuously. How will you free yourself from her?"

"If I could trust her to do the thing she says she'll do," she says.

I say to Richard: "Your wife tries to relax her surveillance of Whitney, but then Whitney does something that says ‘Look at me!' and Mary is hooked again. They're both caught. Whitney needs Mary to look at her, and Mary is hooked into observing and responding to Whitney. It's a circle. Can you help them? Can you free these two people from this vicious circle?"

"I can see where Mary may overreact," he says. "Until a few months ago, when we tried to set up punishments, Mary would holler and yell, but an hour later, they'd be going to the mall together. Mary would feel guilty and give in.

"That I didn't think it was right," Richard responds. "They're close, and then sometimes they're not. I'd say, ‘Let her alone. Let her think about it.'

"And were you successful?" I ask.

The less involved parent is often a critic, but often not a forceful one. Being forceful means getting involved. A therapist who chooses to push for more commitment at this juncture would be doing so without yet understanding why Richard was reluctant to get more involved. I decided to explore this question later.

Instead, I say to Whitney: "I don't understand your mother. Why is she watching you so much?"

"She doesn't trust me," Whitney answers

"And you make sure she doesn't trust you," I say. "What are you doing that makes her watch you so closely? How can you help her to release her hold on you?"

I'm asking Whitney, who came as a symptom-bearer, to become a helper.

"It's not as if I insist on her keeping a watch on me," she says. "I don't understand why she gets upset about small things."

"Something is wrong when they hold you prisoner and you hold them prisoner," I say. "Something strange has happened in a family where the jailors are prisoners, and the prisoners are jailers."

I frequently use this metaphor with families trapped in power struggles. It highlights their helplessness to escape a box of their own making. It conveys the message, "There are no villains, only victims."

We're now changing the family's understanding of how they function, and challenging their certainty about the nature and location of the problem. Whitney is a liar, but that isn't a full or fair description of who she is; nor does she create the problem alone. Mary contributes, and so does Richard, whose role of critic on the sidelines is part of the picture.

When the family returns, I tell Whitney that I want to talk with her parents alone, and she can join us later. Mary, Richard, and I settle down to talk. They look expectant and tense, unsure of where we're going.

"I'd like to spend some time exploring with you who you were before you met each other," I say.

"My parents divorced when I was 5," says Mary, speaking without emotion. "I left home when I was 18, on a Christmas Eve. There was a snowstorm. I was supposed to be in by 10 o'clock, but I didn't get home until midnight, and so my mother threw me out."

"She threw you out? In a snowstorm—at midnight?"

"She'd recently married, and she didn't want kids around," Mary recounts matter-of-factly. "My mother has a lot of good qualities, but she wasn't a good mother. I wasn't sure what to do. I'd lost my girlfriend the previous August—she committed suicide—so I called her mother, and we've been a family ever since. I never really understood my own mother. I think she was depressed most of the time. She could be cruel. . .. It's hard to talk about."

"You were married before. How was that experience?"

"I didn't know my first husband very long. We married and moved to Montana, away from my family. I got pregnant, and then I discovered he was addicted to drugs and alcohol."

"Whitney was a difficult child," her mother says. "If she didn't get her way she'd cry and cry, to the point of throwing up. Growing up, she thought that was the way to get things."

"She was very close to you. Are you afraid she'll become a drug addict like her father?" I ask.

Mary's description of Whitney's behavior carries her traumatic experience with her first husband, and is an imposition of Mary's past onto her daughter's present.

The session is coming to a close. Both Mary and Richard can now see how important it is for them to move toward each other, and what each of them has to do to close the distance between them. Before saying goodbye, I feel that it's important to invite Whitney back in so her parents can let her know what they're thinking.

I say to them, "I'd like you to explain to Whitney that her lying is part of an old story about how you're connected with each other. I'd like her to be free of the prediction that she'll be a delinquent. Can you do that without giving her the feeling that she doesn't need to be responsible?

Richard goes over to Whitney and hugs her.

Mary says, "I want to be able to trust you, and I'm going to work at that. I'm going to stop worrying and concentrate on everyday stuff, and I really will try to have more faith."

As in most cases when a child carries the problem, the goal of therapy focused on transferring the ownership of the symptom from the intrapsychic machinery of the child to the interpersonal drama of parents and child affecting each other. Whitney's lying was a response to her parents' overprotectiveness. Another focus of therapy was on bringing to the awareness of the mother how a traumatic past was distorting her relationship with her daughter.

This blog is excerpted from "The Teenager Who Was a Liar," by Salvador Minuchin, Michael P. Nichols, and Wai-Yung Lee, excerpted from Assessing Families and Couples. Copyright © 2007 Pearson Education, Inc. Used by permission. All rights reserved.

The full version is available in the March/April 2007 issue, The Networker 25th Anniversary Issue: Featuring the 10 Most Influential Therapists.

Read more FREE articles like this on Families and Parenting.